A Recipe for Change: The LEE Initiative’s Women Culinary and Spirits Program

A Recipe for Change: The LEE Initiative’s Women Culinary and Spirits Program 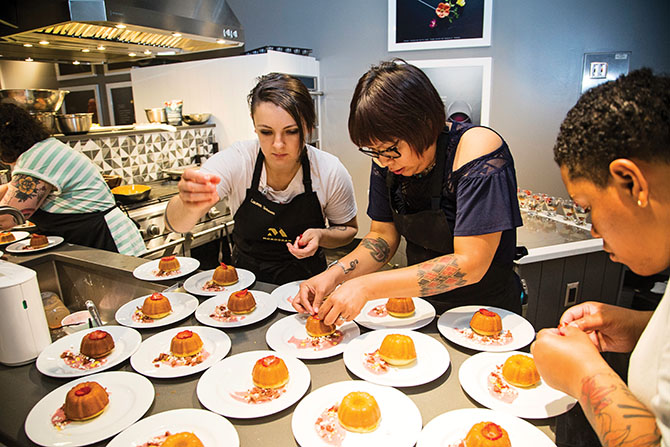 The chefs took part in cooking seminars and some friendly competitions in the state-of-the-art GE Monogram Experience Center.

While the world went into quarantine and the restaurant industry teetered on the brink of collapse, Chef Edward Lee and Lindsey Ofcacek rolled up their sleeves, created a network of rescue kitchens and expanded their 4-year-old, fiercely-local Woman Chefs of Kentucky program into a national platform for gender equality. And that’s just the appetizer.

Last year, while many of us were overwhelmed by panic and the barrage of bad news, Edward Lee (chef/owner of 610 Magnolia, The Wine Studio and Whiskey Dry) and his equally intrepid general manager, Lindsey Ofcacek, went into problem-solving mode and didn’t stop until they served close to two million free meals and launched a kind of national restaurant-industry, woman power revolution.

While Edward wears many hats, his goal is to promote equity in his industry partly by supporting talented women who can then do the same. “There are so many awful ingrained practices in our industry; there is absolutely no excuse,” he says.

While women hold 56% of the jobs in the restaurant industry, they occupy less than 7% of the leadership roles. They make on average a third less than their male counterparts and more than 70 percent of them are sexually harassed while earning their smaller pay checks. “We have to put an effort into it and do something about it,” Edward says.

That’s what he and Lindsey decided four years ago as they watched the latest Me Too restaurant industry scandal break. The pair launched a mentor program for women chefs called Women Chefs of Kentucky under the umbrella organization of his nonprofit, the LEE (Let’s Empower Employment) Initiative. The goal: Keep it local, small and impactful. “Ninety-nine percent of the problems in our industry could be solved with more women in leadership,” Lindsey says. 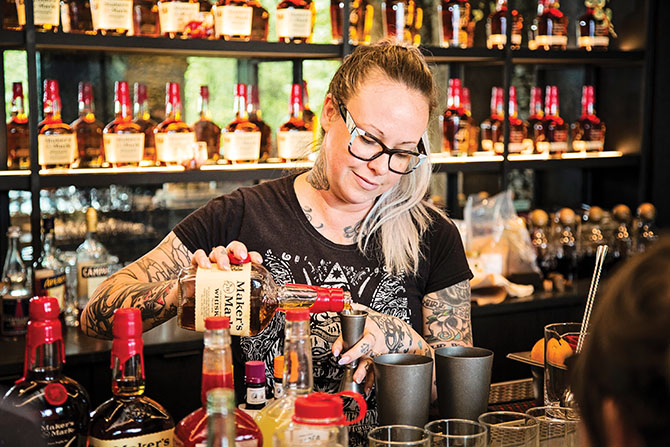 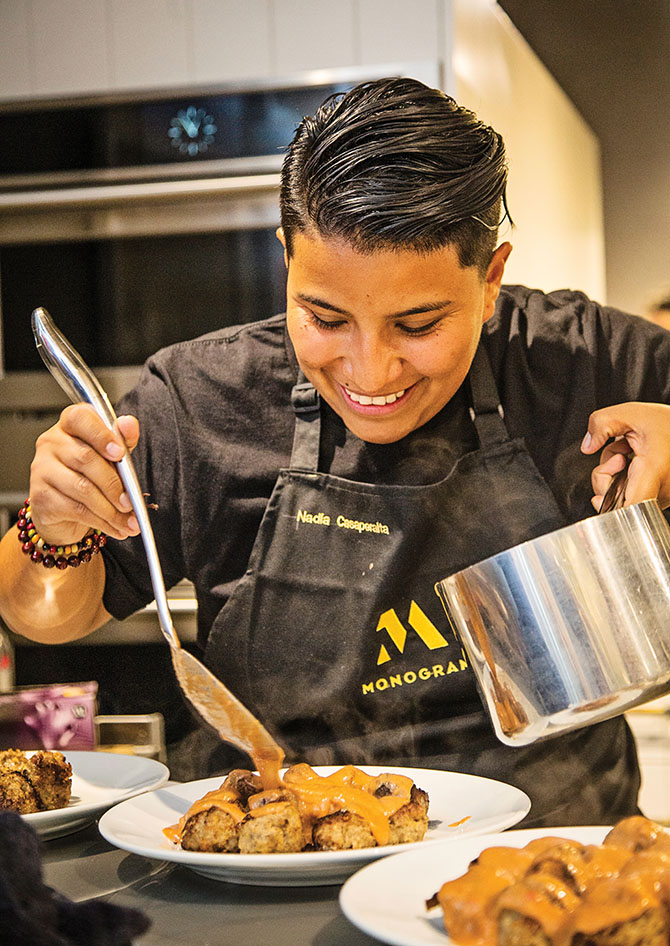 Nadia Casaperalta prepares her entree at the GE Monogram Experience Center as part of the LEE Initiative’s Women Culinary and Spirits Program.

Flash forward four years and they’ve invited five 2020 mentees to Lee’s house in the Highlands after completing their first mentee experience — creating a custom small batch barrel at Maker’s Mark — in what was meant to be 10 days of training, teaching and networking.

And then the world shut down. “We had just announced our third class of mentees and COVID-19 was announced a week later,” Lindsey explains. “Then we finish our first day with them at Maker’s Mark and literally at 5 o’clock the governor made an announcement that restaurants were going to close the next day. Our mentees looked at us and said, ‘I guess we’re going to stay because we all just lost our jobs.’”

What do you do when you’re a restaurant owner and you’re faced with unexpected disaster? You shift into go mode. “Our personalities, growing up in the restaurant world, are such that when you have a crisis, you deal with it head on,” Edward says. “We didn’t have time to stop and think about what we were doing. In the moment, we were just reacting and trying to help.” 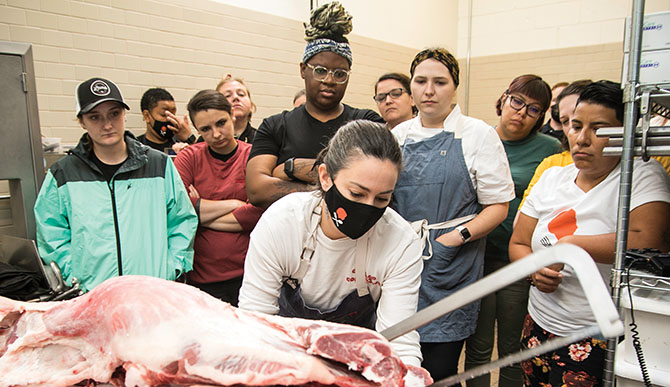 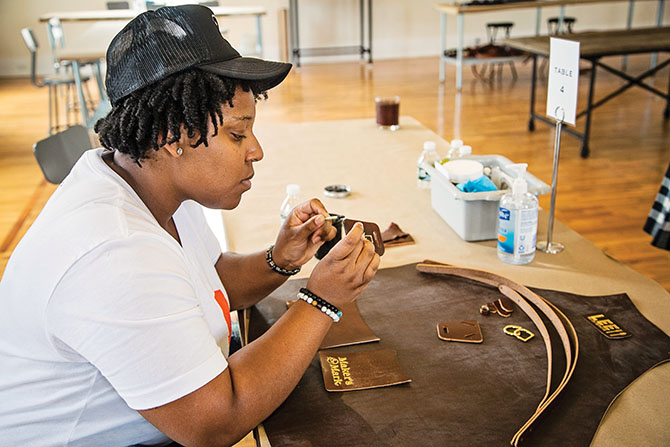 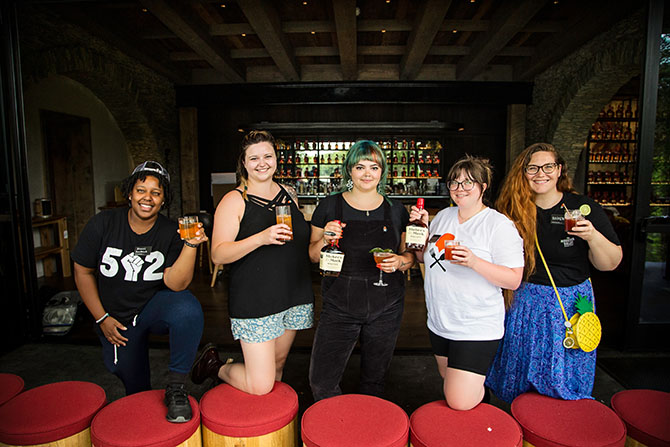 Their help initially took the form of a relief kitchen for laid-off local restaurant workers. “We had food, we had staff. So, we cooked every bit of food we had and put a post on Instagram and caused a traffic jam in Old Louisville and were out of food in an hour,” Lindsey says.

Calls to Makers, GE and Audi buoyed their efforts, she says. “We called our partners who have been with us from the beginning and said, ‘Hey, we want to do this relief kitchen and it’s very important to us and can you help,’ and they said, ‘Of course.’”

Suddenly, their initial plan to feed local unemployed restaurant workers exploded. Lindsey says, “Maker’s looked at us and said, ‘If we can give you funding, do you want to expand?”

The pair opened 21 kitchens in cities across the country. In 18 months, they served close to two million meals.

When the world opened up and they had a chance to catch their breath and examine what they had accomplished a little more closely, they knew this: The plan to grow slowly was officially defunct. “We were national now. There was no going back to being a local community initiative,” Lindsey says. “We kept moving forward. We selected ten 2021 culinary mentees from our national network and also added five spirits mentees. Then we invited them to Kentucky along with the 2020 group who hadn’t been able to complete their program.”

In June, as part of the Women Culinary and Spirits Program, the pair created 10 days of curated experiences to broaden the skills of this talented group of women.

The mentees were treated to full immersion in Kentucky’s food, spirit and artisan culture and connected with superstar female mentors with whom they would have externships. This month, all of the mentoring will culminate in a dinner prepared by the mentees at the James Beard House.

This thoughtful compilation of life-altering moments is not lost on the recipients, some of whom are overcome with emotion when talking about it. “Forgive me if I tear up,” says Brianna Hlava, a spirits mentee and bartender at Barn 8 and The Pearl and co-owner of POCO pop-ups, “because that’s how cool the week was. During that last dinner, the chef who cooked for us was a former mentee, and the whole room stood up and gave her a standing ovation and everybody was crying. It was just love and it was exhilarating and empowering and inspiring. The vibe in that room was incredible.” 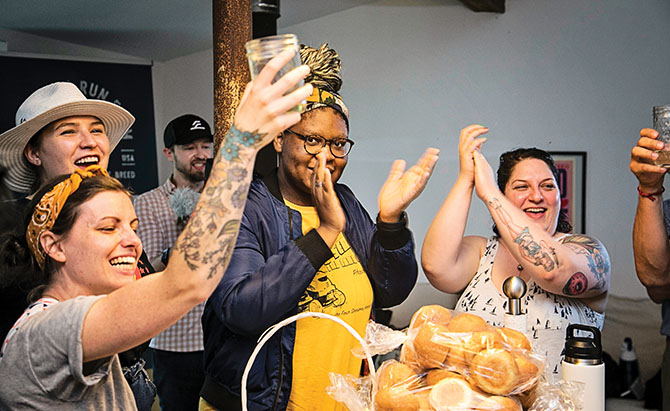 Through the mentee program, the chefs have forged a bond that help them lift each other up if they feel discouraged. 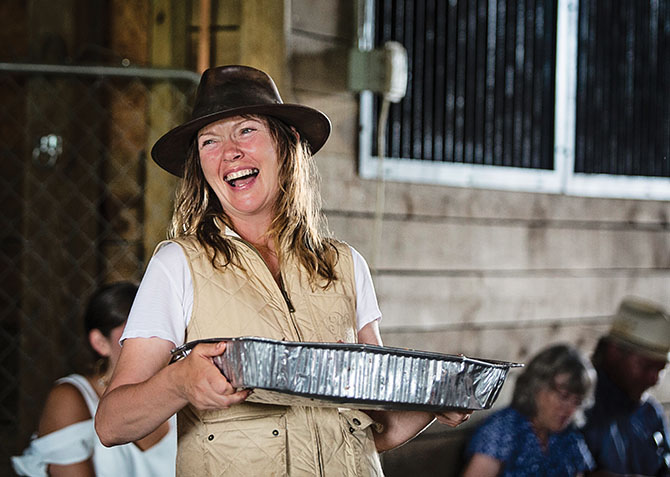 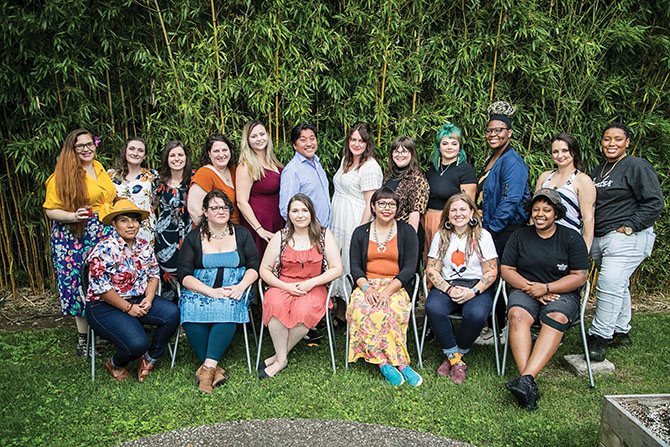 Hannah Arvin, chef de cuisine at Holly Hill Inn in Midway, says her favorite mentee moment came in a workshop with master butcher McCullough Kelly-Willis. “All 10 of us were crammed into the cold processing room of Red Hog‘s butcher shop for more than a few hours. By the end, we were cold and hungry, but you could tell how much the experience had meant to all of us,” she says.

Being identified and uplifted as a woman chef as part of the initiative has had a profound effect on all of the participants — increasing their resolve to be seen and heard in and out of the kitchen. “I used to say, ‘I don’t want to be known as a female chef. I want to be known as a chef,’” Brianna says. “But now, I’m saying, ‘I run a female-owned business. This is a female chef.’ We get erased and overlooked enough,” she says.

Lauren Schoen, sous chef at local bar Vetti, agrees. “In the beginning, I had some mixed feelings about putting myself out there as a ‘female chef’ simply because I just wanted to be me. But it has become glaringly clear to me that if there is any way I can make future women’s journeys in the kitchen easier, that’s what I want to do.”

They are encouraged by the changes they see simmering in the kitchens of the restaurants they inhabit: “There is a lot more accountability,” Brianna says. “If rumors are coming up about a leader, they are immediately addressed publicly. But we still have a lot of work to do.” Lindsey is proud of the track record the initiative has achieved in four short years: “Two past mentees are now restaurant owners; two are head chefs. It’s happening faster than we thought.”

The initiative is pushing change on a macro level, but, for the mentees, the transformative effects are also intensely personal: “I can’t be shy anymore. I need to have more confidence in myself, and in my skills. I have goals too big to be the quiet person in the room,” says Taylor Davis, lead line cook at Barn 8 at Hermitage Farm.

Somewhere in the alchemy of combining talented mentees, accomplished mentors and inspiring experiences, Edward and Lindsey seem to have hit on the secret ingredient for change that may finally turn the tables once and for all. “The fact that the LEE Initiative exists is a beacon of hope for the industry,” Lauren says. “Women being highlighted for the badasses they are and being given opportunities that most chefs only dream about should give everyone a little hope for the future of gender equality.”

P.S. Read about three local entrepreneurs who not only are changing the face of cocktails across the country — they are mixing up the culture in this male-dominated industry one guiltless Old Fashioned at a time.