On Talking to My Kids about Marijuana

On Talking to My Kids about Marijuana 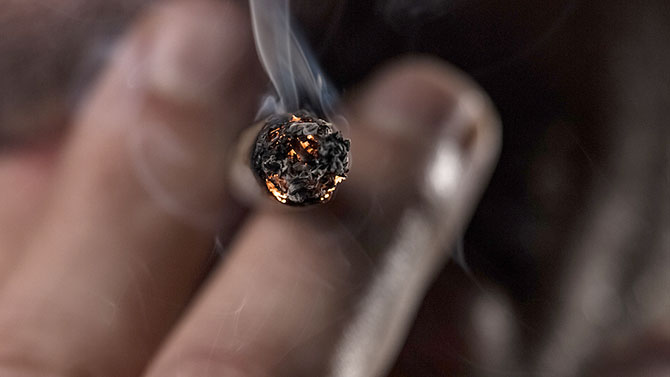 The signs are obvious. All of a sudden, your little cherub turns into some type of demi-varmint. Ravenous and racoon-eyed, they devour everything in the refrigerator. They rifle through the cabinets in search of some gluttonous, odd concoction like peanut butter, banana and potato chip sandwiches.

Or the opposite happens: they become quiet as a church mouse, their spine furls into a parenthesis in an attempt to hide in plain sight. Hobbies and the bric-a-brac of their youth abandoned for the comfort of a blanket-lined cocoon. Eyes dim and redden and sink as they hibernate deep inside the dark den of their bedroom, a lair laden with the stench of apathy and stagnation.

Regardless of the signs – changes in mood, appetite and/or motivation, the presence of paraphernalia, bloodshot eyes and dark-circles, drug-references, or snack wrappers – it is time to talk to your children about marijuana.

But where do you begin? Well, your best bet is probably to get a time machine and start many years earlier, before the dabbling begins. Research says we should begin talking to our children about marijuana when they are in elementary school to establish a healthy relationship with the issue at a time when children are curious but not emotionally involved with the substance. That way, the conversation can remain non-judgmental and establishes an open dialogue based on inquiry and facts.

In my experience, I opted to broach the subject fairly early, when it presented itself to me in my favorite place to have difficult conversations: the car. (I’ve talked about sex, menstruation, consent, drugs, alcohol, and gender roles all from the driver’s seat. It works for everyone because we don’t have to make eye contact and no one can escape.) Just after learning to read, my daughter asked what “Puff, Puff, Pass” meant while stopped at a traffic light outside the Highlands store. My son, just a couple years older, chimed in that it had something to do with sharing, so like my children are known to do, they started to sing a song about two kids sharing with the lines “puff, puff, pass” in their chorus. I could see that going terribly wrong at school, so I introduced them to America’s favorite illegal (for now) drug, marijuana. I told them that some people use marijuana because it helps with their pain or insomnia, some people use it because it helps them relax, and some people use it too much and it makes them unmotivated and paranoid. That’s about it – it made the song stop.

But as our children age, the conversation becomes much trickier. As a high school teacher and parent of two current teenagers, I have had countless conversations about marijuana because I have to. In the U.S. 45% of adolescents will try marijuana before they graduate high school and current legislation across the country has either legalized or decriminalized the drug, normalizing the substance in our culture. Furthermore, most teenagers do not believe marijuana to have any negative properties. This idea is frustratingly validated, in my experience, by many physicians. I have heard from a therapist and a general practitioner that smoking a little weed is no big deal and “quite typical of a teenager like yours with ADHD.” Many of my parent-friends have had similar conversations with their children’s therapists about the use of marijuana in moderation as self-medication for anxiety, insomnia, or focus. That, my parent-friends, is not going to change, so it is even more important to equip our children with the information they need to make their own healthy decisions. The normalization of marijuana in pop culture, medicine, and policy can be frustrating when trying to convince your child not to try it (or to stop using it). I’m a control freak – I have accepted this about myself – so I have a much easier time talking to my students about marijuana in a healthy, inquiry-based, non-judgmental way. But the moment I try to talk to my son about it, I instantly turn into my mother.

The most terrifying thing about raising a teenager is realizing the fact that you are not actually in control of them, so our best line of defense against our worst parental nightmare has got to be in the richness of our dialogue. When tackling a topic that becomes sensitive and shameful, we risk the outcome of secrecy the moment we judge. It happened to me when my own mother asked me if I was “potting it” one late night as I spooned peanut butter from a jar. I was stoned and paranoid and knew after that moment I would never be able to have open dialogue with her about smoking weed. I retreated to my room and cut her off from any glimpse into my adolescent life. I just got better at hiding things.

But that was the ’90s, when kids hung out face-to-face and the weed was wack. Since then, a lot has changed in the world of weed. Most importantly, the plant itself has changed due to hybridization and technology. According to the National Library of Medicine, THC levels in the ’70s were less than 1%; in the ’90s, they stood around 4%; and now, most marijuana has a THC level of 12% or greater. In addition, your child can smoke, ingest, or vape the drug in a variety of potencies, flavors, smells, and effects. Medical marijuana can now be purchased in 33 states and 9 in 10 Kentuckians, according to the Kentucky Health Issues Poll, support the legalization of marijuana for medical purposes. Controversies over the benefits and risks of marijuana are highly debated, however. So, as a family, there is a lot to unpack, especially over the science behind the effects on the adolescent brain and addiction. Research shows that teenage users of marijuana are more likely to develop a secondary addiction or marijuana use disorder into adulthood, and frequent adolescent users have been shown to develop cognitive impairments. Keeping the conversation geared toward inquiry and research will keep the conversation alive.

But I have found that also keeping it light is a great way to navigate a topic that can be emotional on both ends. I love to throw out some facts that might spark further research such as that scientists have found a correlation between smoking the estrogen-dominant plant marijuana and gynecomastia, or man-boobs. “Go ahead,” I’ll tell my son, “look it up if you don’t want to get moobs.”

I realize this approach doesn’t work for everyone, but for me, I want my children to own their own decisions. My hope for them is that they make informed decisions, but I have to say that sitting across from the table, looking into my son’s bloodshot eyes never gets easier.

If you are looking for a good place to start your own research, the Foundation for a Healthy Kentucky’s official policy on the legalization of medical marijuana focuses on several considerations within the state. These are lovely places to start a healthy conversation about marijuana and its criminal, health and well-being, and economic implications. For instance, following the legalization in Colorado, Washington, and Oregon, adolescent usage increased. The Foundation for a Healthy Kentucky recommends prohibiting public smoking and marketing to children with colors and flavors that appeal to teens as a way to deter adolescent usage. Having a debate about the marketing of drugs and alcohol for economic gain might appeal to a teen with a strong ethical code. Or, gearing the conversation toward how the marijuana market is drastically under researched and regulated, might appeal to their common sense. Despite all the options and proclaimed health benefits of cannabis, however, there is still no official regulation that caps potency levels or bans pesticides. So, perhaps a conversation about the chemicals and risks of vaping with oils is your foot through the door with a health-conscious kiddo.

Unfortunately, there is no one way to engage in uncomfortable conversations about our children. We all have a lot to learn about marijuana, and with the potential of medical legalization on the horizon, the conversation will become increasingly more difficult. As parents, we may not decide to puff, but we can’t afford to pass on addressing the smoking gun-ja in the room.

But if none of this works and you are desperate to bring your cherub back down to earth, or use some good old-fashioned humor to soften the blow, you could bring out the big guns: Cannabinoid Hyperemesis Syndrome. It is a strange condition developed by chronic marijuana users that causes incessant nausea and vomiting, and oftentimes the only remedy is a long hot shower. Look it up. I’m not joking, and it’s a really great conversation starter. Works on my students every time. Good luck parents. We can do this.

Read “His View” on the weed debate, a column by Emmanuel “Gift” Clack.