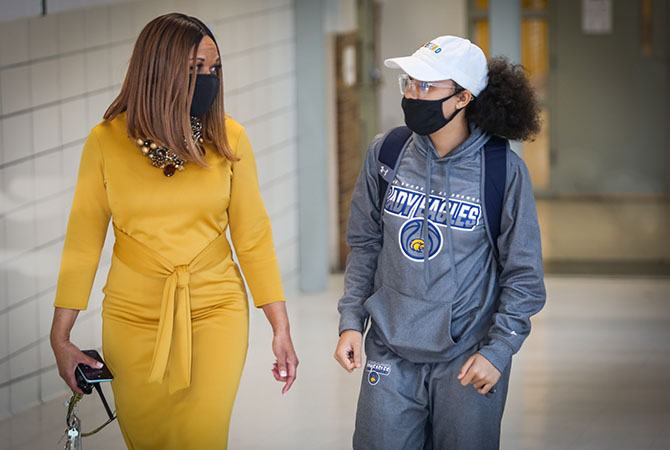 Kym Rice, Academy at Shawnee Principal, speaks with a student.

“I Love Them First.”

Kym Rice, principal of the Academy at Shawnee, had aspirations of becoming a doctor — until she stepped inside of a classroom. She had just moved out on her own and needed to find a job, so she began substitute teaching in her last year at the University of Louisville
and fell in love. “I liked being in different classrooms and working with students and being in a school.”

After she earned her degree in biology, Kym entered a 5-year teacher certification program and hasn’t looked back. She transitioned from teaching into school administration and became the first Black principal in the Shelby County Public School system. But for Kym, the job is about more than keeping kids out of trouble – it’s about building solid relationships with them.

Taking care of their emotional health and providing comfort to them in difficult times is her priority. “I like to think I am a mother figure to them. They have my cell phone number. I have an open-door policy. They walk into my office on their own. They don’t have to set up an appointment. When they need me, I am going to be there for them…I love them first.” Kym has treated students to lunch, attended their after-school activities and has taken students on vacation with she and her family. Establishing connections, she says, is instrumental in helping students grow academically and socially.

Kym says getting through to kids is about “acknowledging where they are and being very understanding of all they have to deal with.” She adds, “You also have to be aware of things that are happening, and letting them understand that you are aware of those things. It’s almost like you have to have the street cred.” And while she admits that everyday isn’t perfect, knowing she has been a positive influence in a student’s life gives her fulfillment. “I know I am doing the right thing.”