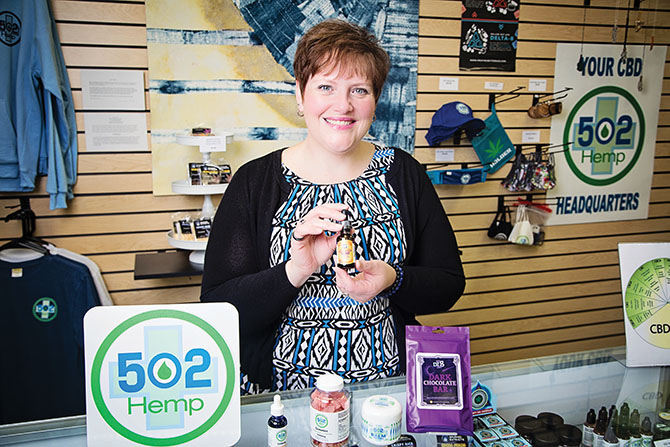 Dee Dee Taylor left her job as a paralegal and eventually opened 502 Hemp Wellness Center in 2018.

No one likes to go through periods of adversity, but sometimes it is that difficulty that launches people into avenues they never would have explored otherwise. Dee Dee Taylor’s husband, John, suffered from Grand Mal seizures and was taking close to 30 pills per day to try to manage them. After a trip out west, he began making and using CBD oil at home. “He went five years seizure-free,” Dee Dee says. In 2014, John and a partner became one of the first licensed CBD processors under the Hemp Pilot Program in Kentucky.

CBD had helped John, and in 2016, it helped Dee Dee, whose job as a paralegal became increasingly stressful. “I was having major anxiety and debilitating depression,” she says. Though skeptical, she tried CBD for herself and found it improved her sleep and mood. “It was a game-changer. I had to know everything about it,” she says.

She put her knowledge of the law and her research skills to work to learn everything she could about hemp, CBD, and the endocannabinoid system. She soon began selling John’s products at fairs and festivals but determined that she needed a brick and mortar store in 2018. She opened 502 Hemp Wellness Center to be a place of education and assistance. “We try to do all the learning for our customers and put it in layman’s terms they can understand,” she says.

Her education and familiarity with the law is a boon to her work as CEO, as is the high-quality of the CBD products. “My husband uses the cleanest extraction process and always tests the products,” she says. “I think that is super important with this being such a new industry. There are a lot of products on the market that shouldn’t be sold.”

Not only has Dee Dee learned about hemp and CBD since founding her store, but she has also learned the benefit of pushing beyond her fears. “Don’t be afraid to try something new. I was terrified when I quit my job,” she says. “Sometimes we will let our fears stop us from trying something new, and that is when we have to have a really good support system in place.”