“There’s no reason we shouldn’t dedicate an hour for ourselves everyday,” says Kimberly, who has lost 80 pounds and is super fit.

“There’s no reason we shouldn’t dedicate an hour for ourselves everyday,” says Kimberly, who has lost 80 pounds and is super fit.

235. That’s a number that makes Kimberly Harrod shudder. As a mother of four adult children, she had fallen victim to what many stay-at-home moms do: she put her family first and neglected herself. “Sometimes we’re programmed to do one or the other, either take care of our family or take care of ourselves. That was my biggest downfall. Before you know it, the weight creeps up very quickly.” So when she finally stepped on the scale and saw that number, it was enough to spark a new outlook and make some changes to her current lifestyle.

Staying Motivated
The first thing Kimberly did was clear her calendar for daily gym time. “What made me successful was setting my time. Nothing could infiltrate that hour, and nothing took me out of it.” Apart from the physical changes Kimberly saw from her gym routine, she also changed her mindset. “The biggest thing I had to learn is that I’m worth that time. There’s no reason we shouldn’t dedicate an hour for ourselves everyday.” Before even stepping foot into a gym, she would prepare herself mentally by reading Shape and Oxygen magazines. “I wanted to educate myself on a better lifestyle, and I wanted to set an example for my two daughters.”

Kimberly’s example should not only be followed by her daughters. Her good habits can be adopted by anyone. Instead of overwhelming herself by cutting out everything at once, she would make little changes. One week, she would take something out of her diet. If she was craving something, she made sure to stay out of her house where snacking was easy.

Big Win
After losing over 80 pounds in three years, Kimberly realizes there were so many things she couldn’t do when she was overweight. Working at an OBGYN office has shown her the conditions that could be prevented simply by taking care of ourselves. “I am a believer that we were intended for activity, that our body was made to move. If there was one gift I could give, I would give the gift of living a healthy lifestyle.” 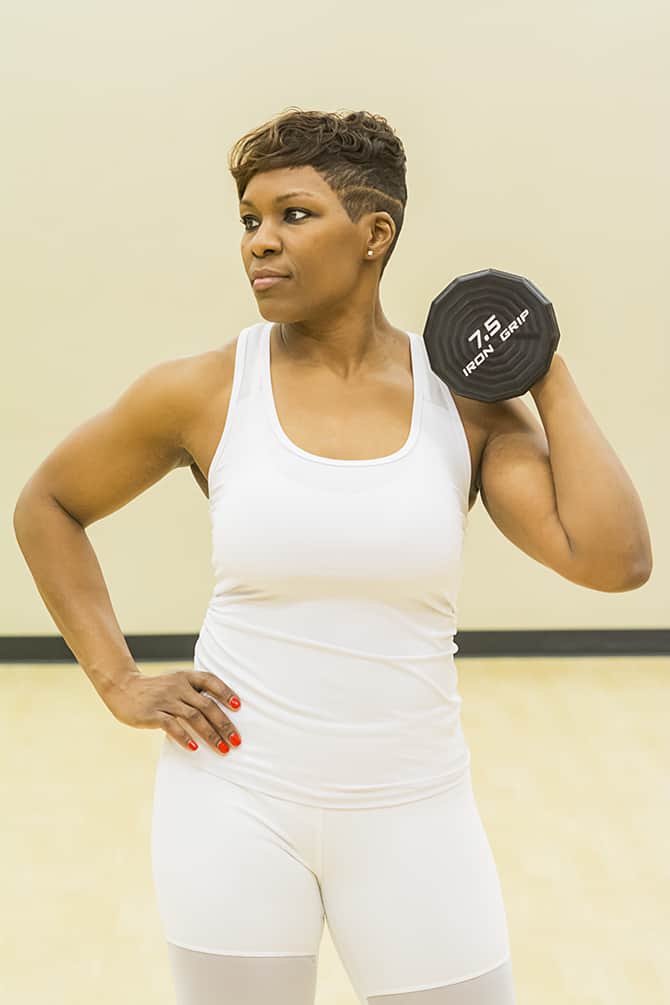 Coworkers and friends have been inspired by Kimberly. Some have started their own fitness journeys. “If you don’t think you can make it through something, just know it is doable. As women we are really strong individuals. I’m fortunate to have tapped into that.” So who gives inspiration to the one who gives to so many others? “I got my strong will from my parents. They instilled that determination and having a positive mind.” Despite knowing how strong willed she is, Kimberly is still shocked by the amount of strength she has gained.