Ready to Get Fit? DeDe Kelley has found an empowering way to do it

Ready to Get Fit? DeDe Kelley has found an empowering way to do it 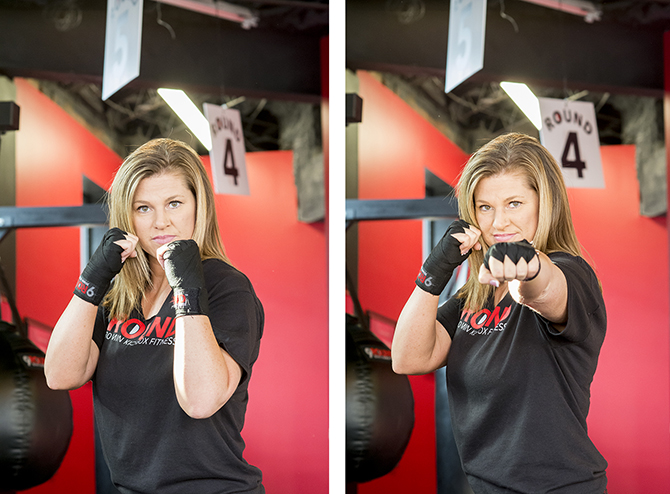 DeDe Kelley had been a runner for over 20 years. Participating in marathons produced in her that runner’s high, that feeling of complete euphoria and itch to continue to run more and more. The long stretches of road acted as an outlet to clear her head. At age 40, she had never been in better shape.

Then, nine years ago, she went through a painful divorce that demanded much of her time and attention. The court battles involved the custody of her two daughters, Alyssa and Katie. During that time, her mom was diagnosed with a rare form of leukemia. “I was all my mom had. I was driving back and forth from her house in Indianapolis at least twice a week for five years.” With everything going on, and knee troubles to boot, DeDe was forced to make a decision about running. “I lost that part of my life. My health came last. All my attention was focused on my mom and court.”

Her life plummeted into turmoil. When her mom passed away last year, DeDe vowed to take back her health. Her fitness goal was to get back to how she felt before her life took its turn. So when DeDe discovered 9Round, a kickboxing gym designed in a circuit format, she knew she had found her niche. “Coming out of that workout was the first time in years that I walked away from something and felt empowered. I got control of my body again.”

When DeDe started attending 9Round, she was working as an independent executive coach. She gave people advice on how to live their life, but was surprised that health and fitness were not incorporated into her teaching. To integrate nutrition and wellness into her job, DeDe earned her Certification for Wellness, which in turn led to her in-depth research into the 9Round franchise. “I fell in love with the company and the location of headquarters in Greenville, South Carolina. The owners are very hands-on about who they’re bringing into the franchise.”

After putting family first for so long, DeDe could relate to the tight-knit group with the mentality to “protect your own.” Seeing the need for this fresh and creative workout method in the Highlands area, DeDe acted quickly to open up her own spot at 1512 Bardstown Road. Her goal is to open a second gym within the next year. “I think this gym will be just as popular in the future because it’s so innovative. This workout changes every day. People need something that’s efficient. The faster the world is moving, the better this workout becomes. You are moving from the minute you walk in the door to the moment you walk out.”

The workout consists of, you guessed it, nine rounds of exercises that help sculpt the entire body. The first two stations include strength building moves that incorporate kettle bells, jump ropes, and medicine balls. Stations three through eight let you indulge your inner Rocky. You have the opportunity to strike the variety of bags to increase hand-eye coordination, endurance, and speed. The ninth round is all about the core. And the best part is, it’s over in just 30 minutes. “Think back to some of the most famous boxers, the old ones,” DeDe says. “Ali, Sugar Ray Leonard, their appearance was fit, lean, and muscular. If you’re looking for bulk, this isn’t your gym. It’s going to get you that lean muscle build. There is no other training like this. It’s total body, and you will find muscles you didn’t know you had.”

As a walking advertisement for the workout, DeDe has noticed improvements not only in her physical appearance, but with her sleeping patterns and energy levels. She wants to use this newfound inner strength to empower her clients, and specifically women, to find their voice. For example, her daughter Alyssa, 17, of whom she now has full custody, works for her and has made drastic improvements in such a short amount of time. “If I can give someone a piece of both that inner strength and physical strength, I will do it. I want this place to be a haven where people wake up and want to come.”