“I’m My Own Health Advocate”

“I’m My Own Health Advocate”

Rosemary DeLaney, 62, is a certified Pilates instructor who has owned Pilates of Louisville since 2001. She is also an aesthetician at the Institute of Anti-Aging Medicine (IAAM). “I’ve always been an active person and take care of myself,” Rosemary says. “I learned that I have to be my own health advocate and to trust my doctor.”

As a Pilates instructor Rosemary sees there is much more to staying healthy than just keeping fit. “The social part is where people make friends,” she says. “They have fun and want to come back. They’re held accountable.” Many of the Louisville native’s clients have taken her classes for years and are her close friends.

Teaching Pilates, working at IAAM, spending time with friends, and relaxing all work to restore Rosemary’s balance. “My friends are aware of it and keep me on track,” she says.

Even though she took care of herself for years, her health bottomed out after a very stressful point in her life. “I went through a divorce and my child was young; I had a house built and started a new business; and I suffered the great loss of my grandmother and a dear friend over a 3-year period,” Rosemary says. “That is when it all started.”

In 2007 Rosemary was diagnosed with hypothyroidism (an underactive thyroid gland), which is an autoimmune disorder. “The nurse practitioner said that all of my stress showed in the blood work, including a high cortisol level and low vitamin D,” Rosemary says. “She thought that my teaching Pilates every day helped to slow down the aging process.” Rosemary was prescribed Armour Thyroid medication, which is a natural product made from animal thyroid glands. “I started feeling wonderful, like my old self,” she says.

The next year, Rosemary was diagnosed with Celiac disease and she went on a gluten elimination diet. Her research showed that an estimated 75 percent of those with autoimmune diseases are women. “If you have one disorder, it’s very common that you have another.” Her belly had been swelling, and after the first week without gluten, the bloating was reduced. “I wasn’t eating the things that caused inflammation,” she says.

In 2013 after a trip to Costa Rica, Rosemary saw large, red lumps on her legs that were hard. An internist diagnosed her with sarcoidosis, which affects the lymph nodes and is the growth of small collections of inflammatory cells in the body. “The doctor said that they should go away on their own and they won’t come back,” she says. “It took about a year. It was another autoimmune disease.”

Rosemary has regular blood work at IAAM and she is monitored by Dr. Peggy Fishman. “Peggy has saved my life,” Rosemary says. “I work with her. She’s one of my dearest friends and helped me through all of this.” In addition to Armour Thyroid, she is prescribed bioidentical hormones, which help with moods, the skin, hair, and nails. “Women who are at menopausal age find it hard to lose weight and stay balanced,” she says. The hormones are compounded for her based on what should be replaced in her body.

Rosemary watches her diet, takes vitamins, supplements, fish oil, and herbs. She mixes turmeric — a plant in the ginger family that reduces inflammation — with baking soda to brush her teeth and uses it in soups. “Vitamins B12 and D are two of the most important for me,” she says. Rosemary was told in her 20s that to avoid aging the skin she should not sunbathe. “These little jewels that I’ve gotten through my life I take as part of my life,” she says. 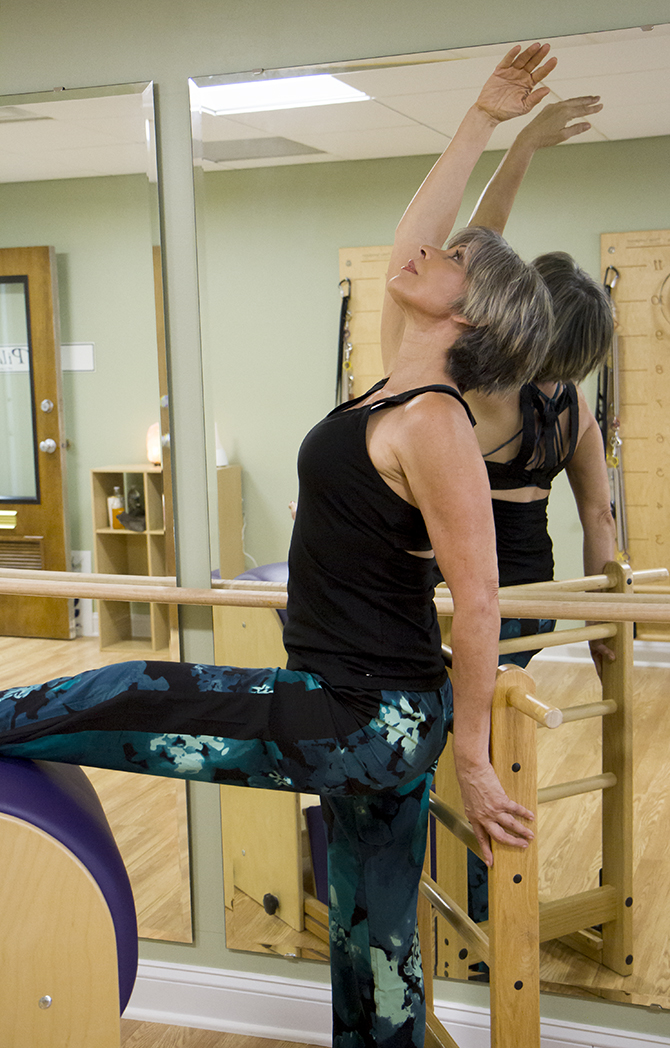 Rosemary’s studio, Pilates of Louisville, is located at IAAM and she also joined ProFormance LLC on River Road to teach Pilates mat classes. “I’m the luckiest woman in Louisville,” she says. ”I am surrounded by such good women in my life. I am so blessed and so happy with them.”