How this IT Professional Flies (and Spins) Away Stress

How this IT Professional Flies (and Spins) Away Stress 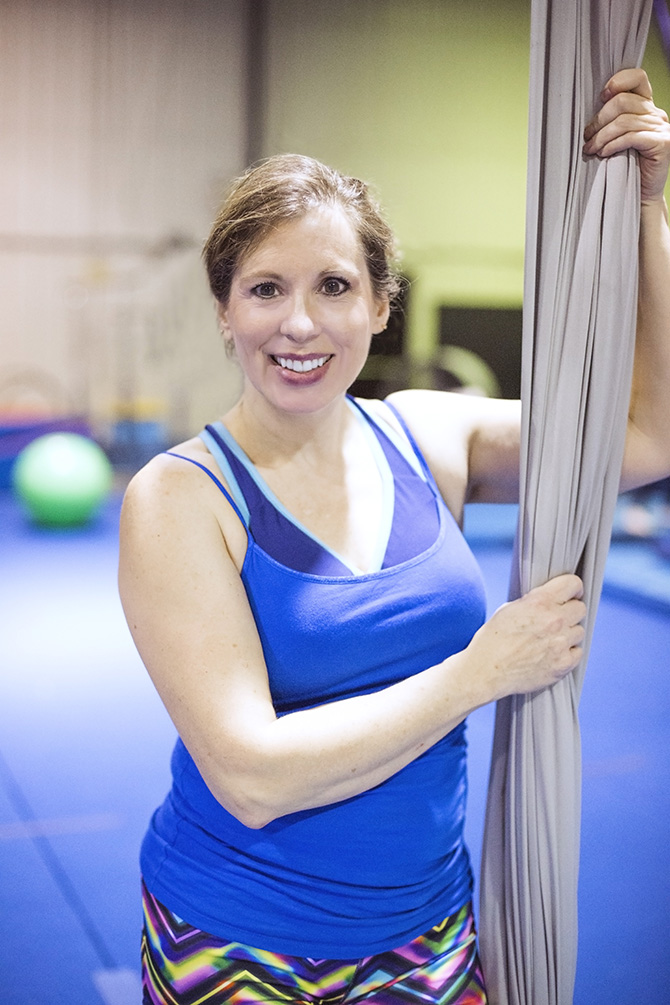 Gretchen Wilkins of LaGrange, Kentucky, isn’t technically a superhero, but that is how I imagine her. She spends her days as an information analyst for a local company that makes software for warehouse management, which seems very professional and Clark Kent-like. During her downtime, though, she flies, she spins, and she twirls.

For the past 2½ years, Gretchen has been training at Louisville Turners, where she hangs from aerial silks and hoops (lyra) in two hour-long weekly classes. She says, “It’s not a workout where you’re clock-watching because you are learning new things. It has never felt like a workout.” She also likes the flexibility of being able to pick and choose class times that work with her schedule.

Gretchen first learned about aerial artistry when her daughters’ Girl Scout troop went to see Turner Circus, the Louisville Turners annual show, which includes aerial and ground acts that Gretchen describes as storytelling with a cirque-theater type production. The mother of one of the Scouts performed in the 66-year-old circus, and Gretchen was in awe. Soon after seeing the performance, Gretchen enrolled herself and her 10-year-old triplets Zach, Hannah, and Jessie in one of Turners’ parent/child classes. All of them fell in love with aerial work and have performed in the club’s circus the past two years.

Gretchen has seen many benefits from taking year-round aerial classes. She slimmed down and has more muscle definition and core strength. She now also has a shared passion with her children. Aerial art is a great stress-reliever and confidence booster that makes her feel better mentally. Gretchen says, “You’re discovering what you can do as an individual. You leave the Mom role, the coworker role, the wife role, and you are just you.”

Plus, aerial arts allows Gretchen to jokingly say at the end of a stressful day, “I’m going to go hang myself.”

Gretchen says, “I get grumpy if I don’t get to class every week,” so she relies on the support of her husband, Greg, to ensure it happens. “He loves that I’ve found something that I’m passionate about,” she adds.

Seeing other women taking aerial classes is a boost to Gretchen. She didn’t have a background in gymnastics or dance and says she is proof that “anybody can learn how to do this stuff.”