Four charming places you and your love can go for great food and an unforgettable night.

By Lennie Omalza  |  Photos by Kylene White and Heather Florance

Whether you’re looking for a first-date spot or a place to celebrate a milestone anniversary, we’ve got you covered. Louisville has a plethora of restaurants to choose from, and here are a few of our faves. Amazing ambiance, exquisite entrees, decadent desserts, and chic cocktails will help ignite a new spark or keep your current romantic vibes flowing. 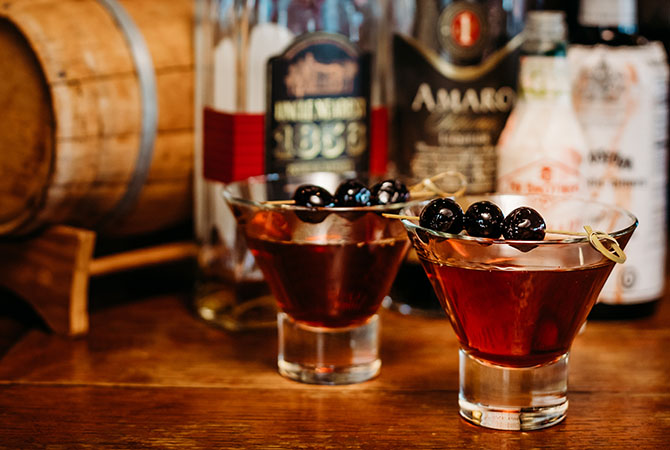 Top off your meal with the Black Manhattan cocktail at Bourbons Bistro. 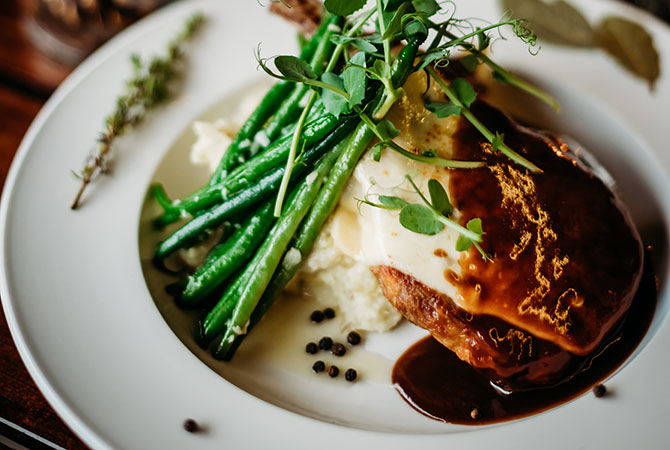 The Bourbons Chop is a 12-ounce pork chop served with vegetables and mashed potatoes. 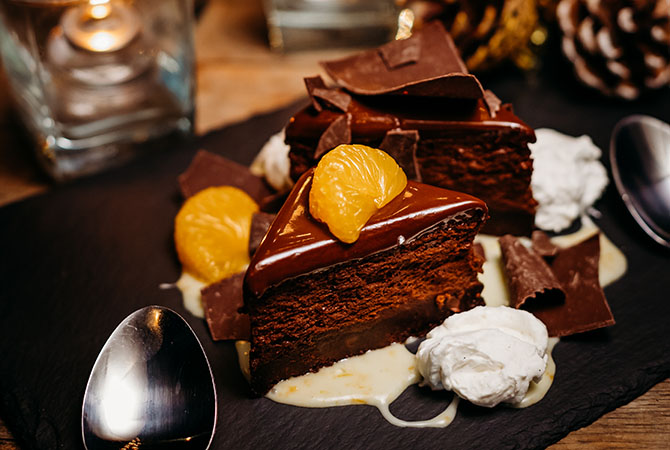 Make room for a dessert of Triple Chocolate Cheesecake — a crowd pleaser.

A corner table in the dimly lit dining room with exposed brick is one option for an intimate night out at Bourbons Bistro. Front-of-house manager Margot McMillen, however, recommends outside seating for couples. “We have a [wood-burning] fireplace out on our covered patio that is extremely popular in spring, fall, and winter,” she says. “People that have eaten at [those tables] typically tend to request it over and over again.” During the winter, the space is enclosed and heated with both the fireplace and outdoor heaters. Seats in the area are limited but can be requested with a reservation. “We do a lot of two-tops … [where couples can] sit fireside,” she adds. “I would say that it is the perfect date-night spot.”

Margot suggests couples share the Bourbons Chop, which is a Frenched bone-in pork chop that’s wrapped in prosciutto and topped with Asadero cheese and a bourbon veal demi-glace. “There is just so much of it, and when people split it,” she says, “we just give them a separate plate with more sides. They get their own vegetables, and their own mashed potatoes, and their own gravy, and they can just split the 12-ounce pork chop — so they’re still getting six ounces of protein each.”

The Black Manhattan, which is crafted with bourbon, amaro, and black walnut bitters, makes for a complementary accompanying cocktail. Another oft-ordered option is the Paper Plane, a drink made with equal parts bourbon, lemon juice, amaro, and Campari, then served shaken in a coupe glass.

Regardless of what you and your sweetie decide to dine on at Bourbons Bistro, Margot suggests telling the host your plans. “When you’re making your reservation, mention that it’s a date night so that you get one of the select tables — indoors or outdoors — that are [solely] for two-tops.” 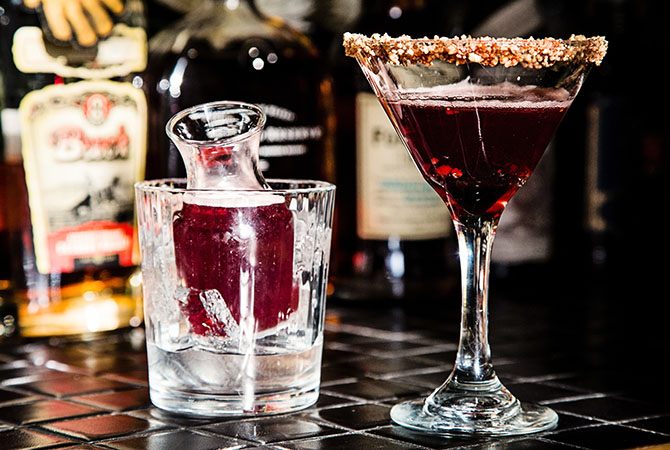 A Kiss of Kentucky is a drink made with Woodford bourbon and Rivulet pecan liqueur at Buck’s Restaurant & Bar. 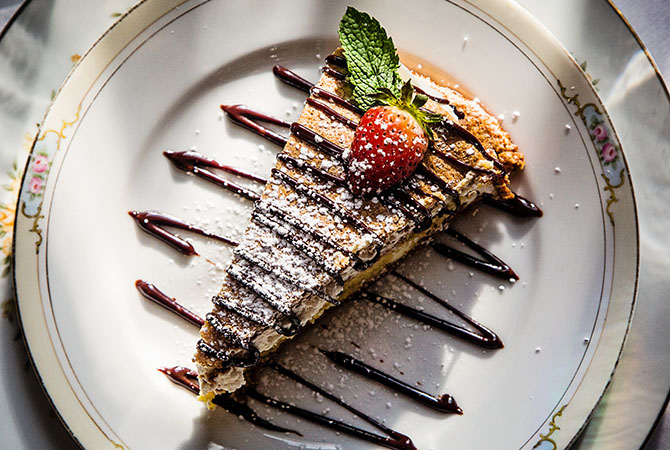 Treating your partner to a slice of mocha dacquoise is a sweet way to show your love.

We’d be remiss if we didn’t mention Buck’s Restaurant & Bar as a great date-night destination. Tucked away in Old Louisville, Buck’s sits on the bottom floor of the historic Mayflower building. Though physically obscure, the restaurant is no secret. In fact, it has been Louisville residents’ go-to place for special occasions for 30 years.

Its interior is memorable, as it is unlike any other restaurant around. The front area boasts black-and-white checkered tile flooring, hunter green walls, and dark wood accents. The bar on the left is lined with liquor and a variety of fresh white flowers. To the right, Reggie Watkins’ velvety voice and piano playing provide melodic background sounds. As guests walk further in, an elaborate chandelier hangs above candle-lit tables — an ideal setting for a romantic night out.

Manager Karen Shane says she sees a lot of couples share the master steak, which is a New York strip served with crab legs and shrimp. “A lot of people like to split that,” she says. “It’s a lovers’ meal type of thing.” She adds that such an exquisite meal calls for a bottle of wine, but if guests are looking for a festive specialty drink, Buck’s has an extensive cocktail list — and, as part of the Urban Bourbon Trail, the bar offers more than 50 bourbon selections.

“We have a drink called ‘A Kiss of Kentucky,’ that we’ve had for quite a few years,” Karen says. “It’s made with Woodford bourbon and Rivulet pecan liqueur, and we rim the glass with pecan; and it has a little bit of port in it. It looks romantic; it’s a really pretty drink.”

The best dreamy dessert to end the night, Karen says, is hands down, the mocha dacquoise. “That’s our signature dessert,” she says. “It really is ridiculously good. It’s three layers of toasted almond meringue with mocha buttercream, rum Chantilly, [and] powdered sugar with a little chocolate drizzled on it. It is just divine, and people love to share that. It’s rich, but it’s not as rich as it sounds.”

Karen adds that though Buck’s has an upscale ambiance, it appeals to many. “We’re a beautiful, elegant restaurant, but we’re not stuffy,” she says. “We have started getting a much younger clientele. … It’s nice to be able to appeal to all ages.” 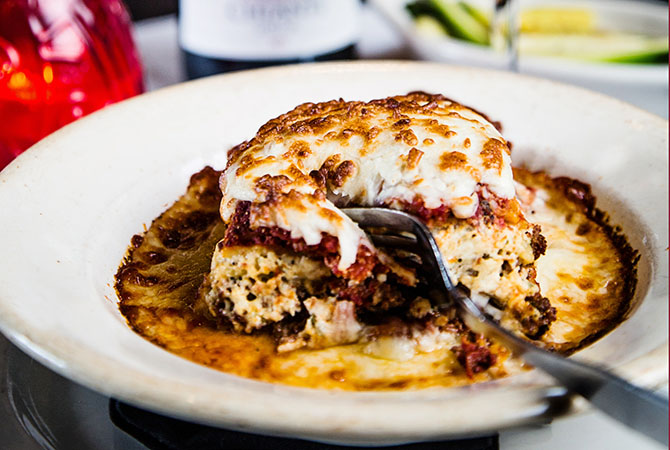 At DiFabio’s Casapela, order the lasagna and have plenty of leftovers. 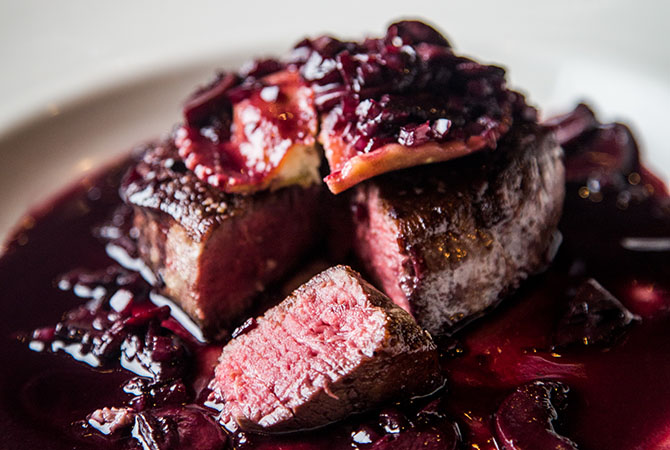 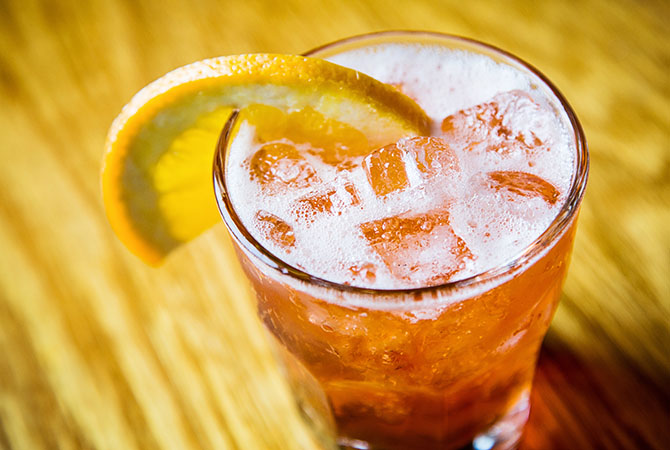 String lights frame an old fireplace; five letters spelling out amore — the Italian word for “love” — adorn the mantel. These are just a couple of sweet touches at DiFabio’s Casapela that make it a great place for a romantic dinner. Set between a coffee shop and an Irish pub in the Clifton neighborhood, the small Italian restaurant has a cozy, hidden-gem type feel. Couples can sit at a candlelit table while sharing the lasagna, a traditional Italian staple layered with house-made sausage, meat sauce, ricotta cheese, and marinara, which is then smothered in mozzarella cheese and baked. “Our lasagna is huge,” says Caity DiFabio, who co-owns the eatery with her husband, John Riley. “Me and my husband — neither one of us can finish [it] by ourselves. It’s impossible.”

Other popular shareable options, Caity says, are the filets. Each of the three steaks — the Fabio Filet, Peppercorn Filet, and Gorgonzola Filet — are served with sauteed zucchini and squash and come with rich sauces. “Our Fabio sauce is a red wine demi-glaze sauce with shallots and mushrooms, and it comes topped with ravioli,” Caity says. “It’s actually one of our most popular filets.” The Peppercorn Filet is rubbed with cracked black peppercorns and is finished with a balsamic reduction, while the Gorgonzola Filet is served on a bed of rich cream sauce, finished with crumbled gorgonzola and toasted walnuts. Caity adds that couples can also add a side of pasta to any filet order. “That will make it much heavier.”

For a sweet end to an amorous night, finish the meal with one of DiFabio’s house-made desserts. “My personal favorite is the tiramisu,” Caity says, “but the chocolate fudge cake is … a good one to share because it’s a very rich, dense chocolate cake. It’s also gluten-free, so that’s nice.”

Dinner at DiFabio’s is sure to be a hit on your next night out — it’s all about delicious food, served in a simple, quiet setting. “We’re just trying to be the traditional restaurant that everybody feels comfortable [in] and is happy with,” Caity says. 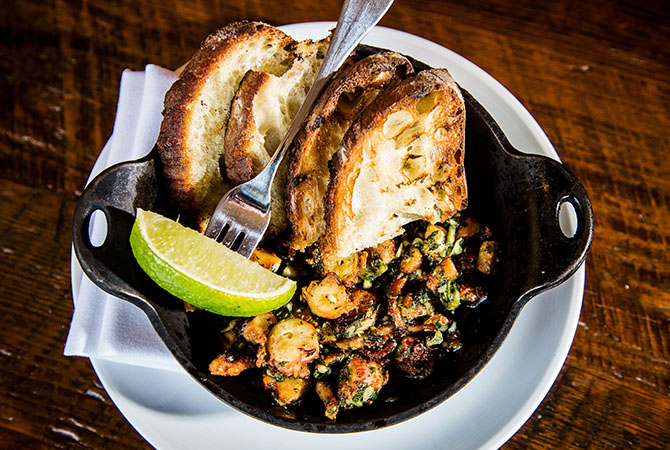 At Proof on Main, Charred Octopus with Bagna Cauda, Lime and Toast is a popular dish. 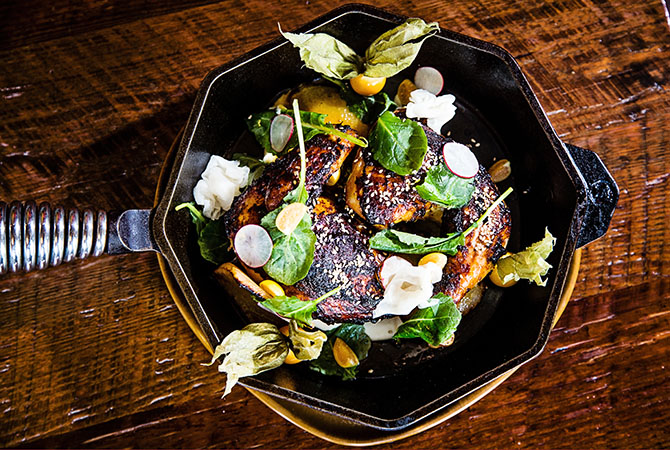 Give the Smoked chicken a try.

For a unique and interesting dining atmosphere that’s sure to offer some conversation starters, you’d be hard-pressed to find a better place than Proof on Main. Located inside 21c Museum Hotel, the restaurant boasts unique wallpaper, paintings, and sculptures at every turn. Its dinner menu also features a specific section with shareable items, perfect for date night. Charlie Cronin, area director of food and beverage, suggests the charred octopus with bagna cauda, lime, and toast. “It’s … been on the menu since the day we opened,” he says. “So, for almost 16 years, [it’s] been on the menu in pretty much the exact same form. Even though we’ve had four different chefs, [it’s] the one dish that has never changed. It’s become what we’re known for.”

Charlie adds that when it comes to drinks, most guests at Proof on Main go for bourbon. “‘No Spectators’ is on the menu, and [it’s] a great cocktail because everyone comes in for bourbon cocktails,” he says. “It’s definitely the most popular. We use Old Forester 86 bourbon; we use an amaro called sfumato; and then it has a grapefruit rosemary cordial in it, with lemon juice and a spritz of a very peaty scotch.” An off-menu cocktail diners can order — and impress their dates with — is Smoke Rings, a drink that was inspired by an art installation in the museum. “It’s a smoked lapsang tea-infused bourbon with an amaro called Ramazzoti, dry curacao, and a spritz of absinthe,” Charlie says.

His pick for a couple’s dessert is the Kentucky Stack Cake, made with lemon buttercream, almond, and buttermilk whip. “It’s a big square of cake,” he says. “[It’s] layered with powdered sugar and whipped cream, and just sort of really perfect for two people to [share].”

Dessert may be the end of the meal, but it doesn’t have to be the end of the night. “What makes us special,” Charlie adds, “is [that] being part of 21C Museum Hotel, before dinner or after dinner, you can take whatever cocktails you have left or get new ones and walk around the galleries and get to experience a contemporary art museum. [That’s something] you don’t … have much of in Louisville — at least not ones that let you walk around with cocktails, which is always much more fun.”

Decided to stay home and cook a romantic dinner instead? Consider one of these recipes from Corey Milliman, owner of CC’s Low-Carb Kitchen.