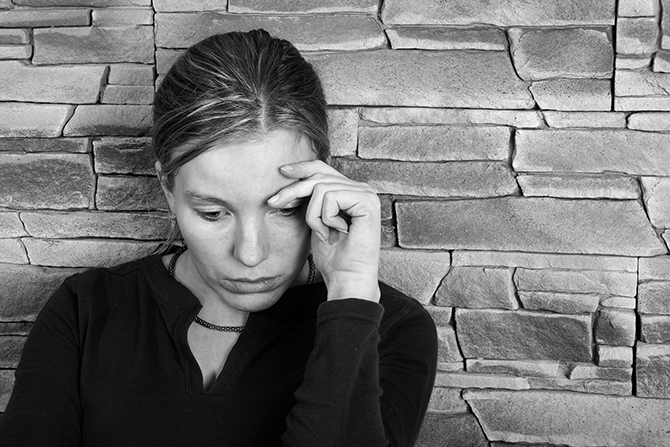 For some women, depression is profound sadness that pours into a waterfall of tears. For others, depression is rage that spews forth as a result of minor irritations. Depression may be the dull pressure of emptiness that makes being among friends and loved ones unbearable, or it can be bone-crushing fatigue that makes sitting up in bed a Herculean feat.

Sarah Hayden, 43, has struggled with depression most of her life. She was diagnosed in high school, but it took years for her to receive treatment. She didn’t know she needed medica­tion, but adds, “I really didn’t want that to be something that was going on with me.”

Over the years, Sarah has tried prescriptions and ther­apies with varying success. Fortunately, there was a big chunk of time in my life where my depression was managed successfully with medication,” she says. “I was able to enjoy my wedding and the births of my children because of this.”

The past year was especially difficult for Sarah due, in part, to job stress. She transitioned to a middle school counseling position at a local private school and felt overwhelmed. As her depression worsened, she began sessions of electroconvulsive therapy in addition to the medications domipramine and Abilify, and individual and group therapy. She also found it necessary to inform her boss about her illness. While she was scared to do so, she says it was helpful for her colleagues to know that she was struggling.

In addition to her job, Sarah’s marriage, friendships, and her ability to mother her children are affected by her depres­sion. It steals the energy she might invest in going on dates with her husband. When it comes to friendships, Sarah says, “I find it hard to be upbeat and also feel like it’s hard for my friends to relate to me.” As if depression isn’t bad enough, it also invites worry. Sarah frets about what her depression does to her children. Alex and Max. “I worry that they are only going to remember me as being sad,” she admits.

Jenny Caffrey, a licensed massage therapist, was diagnosed with depression in 1997 when she was 24 years old. She had a toddler, a full-time job, and had just recovered from mononucleosis when she found that she could no longer function the way she normally had. She says, “I couldn’t get back to who l was used to being.” By the time she was sent to a psychiatrist, Jenny says, “I was at the point where I didn’t care what I had to do to feel like myself again.”

In the early course of her treatment, Jenny says she wasn’t educated about depression. She had the stigma of the disease in her mind and felt that it was her fault that she couldn’t control her brain. She began taking Prozac but didn’t feel that it was working. Several times she told her therapist and psychiatrist, “I’m not getting any better.” After a suicide attempt and hospitalization, she began to research other medication options and eventually demanded that her psychiatrist try a different one.

Jenny has gotten pretty good at recognizing when her medication isn’t working as well as it once did. She will have crying fits that she just can’t get over and her fuse is shorter, but she says, “It doesn’t get nearly as out of hand as it did” when she was in her 20s.

One of the most important things Jenny has done for herself is find varied coping tools that help her manage her depression. She does meditation, writes in a journal, practices positive self-talk, and attends workshops. She has also educated her spouse and adult child to know how to help her when she experiences a flare-up. Even though she is in a good place right now, Jenny says, “What people don’t see is how much I can just struggle on a daily basis.”

Depression is actually a spectrum of disease and spans a wide range, according to Dr. Ora Frankel a psychiatrist at The Couch, an immediate mental health care center.

Depression might result from a loss and last a few weeks; it might present as chronic yet slight unhappiness (think Eeyore); it may be a single episode or be recurring, like every winter, for example, or it could be bipolar disorder, which some clinicians consider to be on the depression spectrum.

Women who have been suffering the vegetative symp­toms of depression, such as altered sleep and appetite, low energy, negative thinking, decreased concentration, and decreased ability to enjoy pleasure, may be hesitant to seek out the care of a psychiatrists. Despite increased awareness of depression, there remains a stigma for many women about seeing “a shrink.” Frankel says, “My bias is to have somebody see a psychiatrist first. In my mind, you always want to start with a really good medical evaluation” since it can rule out other illnesses.

Jenny Nord is a local woman whose other medical condi­tions worsened her depression. Although she had struggled with depression periodically since college, she noticed an intensification in her symptoms and in August 2013 was diagnosed with Hashimoto’s disease, which causes the im­mune system to attack the thyroid, rendering it underactive. It is not uncommon for a fluctuation in hormones, whether from disease or a naturally occurring phenomenon (like perimenopause), to set off or aggravate depressive symptoms.

When it comes to symptoms, Frankel says, “The history of a patient is important in making a diagnosis” and demands the psychiatrist get a sense of the patient’s “baseline” or “normal.” Frankel says it is also important to look at the patient’s social history: “Are there stressors that precipi­tated it? Is there abuse going on? Is there substance abuse?”

One of the biggest changes in treating depression in recent years is the use of genetic testing to help psychiatrists choose the best medication for their patients. While about 70 percent of patients respond to some type of medication, there are many categories from which doctors can choose, from selective serotonin reuptake inhibitors (SSRIs) to tricyclics to augmentation with atypicals. “Genetic testing helps us identify those patients who may metabolize meds too rapidly or people who metabolize too slowly, or on which medicines they might have side effects,” Fran­kel says. While she doesn’t do it right off the bat with patients, it is definitely an option if a patient has already tried a few medications and isn’t having much success.

As much as depression can tinge a woman’s outlook to appear bleak and hopeless, the horizon is increasingly bright due to newer and better medication options, genetic testing, and especially the willingness of women who come forward and share their experiences. As Jenny Nord says, “I’m done hiding. Depression isn’t who I am. It is what I have to work on.”

If you’ve been dealing with too much stress lately, read these tips for keeping yourself calm and lifting your mood.