Be Like Erin: A Corporate Woman Who Found an Exercise that Works

Be Like Erin: A Corporate Woman Who Found an Exercise that Works

To grow up in a household where munching on two dozen Krispy Kreme donuts is a normal Tuesday morning makes it difficult to integrate healthy habits into your lifestyle. Add a family history of diabetes, obesity, and other health issues, and you’ve got yourself a very sugary recipe for disaster. Erin Stevens’ recipe included a doctor-recommended cholesterol pill by the age of 24. She knew her weight was an issue, and she knew something had to be done, but she was unsure of how to go about it.

Erin’s answer came to her through her older brother, Noah, who was born with a developmental disorder. Noah is characteristically regimented and doesn’t always adapt to change in his daily schedule, so the family was shocked when he busted out his best moves on the dance floor at Erin’s wedding reception. Witnessing her brother break a sweat gave Erin an idea.

With her brother in tow, a determined Erin decided to partake in a Jazzercise class. “I remember after my first class I went straight to bed when I got home because I was so exhausted.” Her brother eventually lost interest, but Erin continued to attend classes two or three times a week. In two years, she lost at least 50 pounds. By the end of her third year as a Jazzercise member, she was getting recruited to instruct her own class. Maybe it was her significant weight loss that made her appealing as an instructor, or maybe it was her ability to relate to most of the franchise’s clientele. Whatever the reason, Erin has used her platform (quite literally — she stands on a stage when she teaches her classes) to speak truthfully and empower the women who come through her door. “I work out because I like to eat. I love bourbon and beer. I’m not a dancer at all, but you don’t have to be.”

Despite her perceived dancing abilities, Erin is in her third year as a certified Jazzercise instructor. She teaches five to six one-hour classes a week. There are a variety of classes offered, including core, fusion (high intensity interval training, or H.I.I.T.), and strike (punching). The routines and music constantly change and are catered to attract a younger generation of Jazzercisers. “The trick is getting past the name that’s been around for over 30 years. Getting the younger crowd is difficult because Millennials have a preconceived idea about the program in their head.”

One thing Erin has observed is the tendency of newcomers to come back. “It’s woman-dominated, so we’ve created a sisterhood community. When you start coming, you meet people, and that’s what keeps me coming back.” 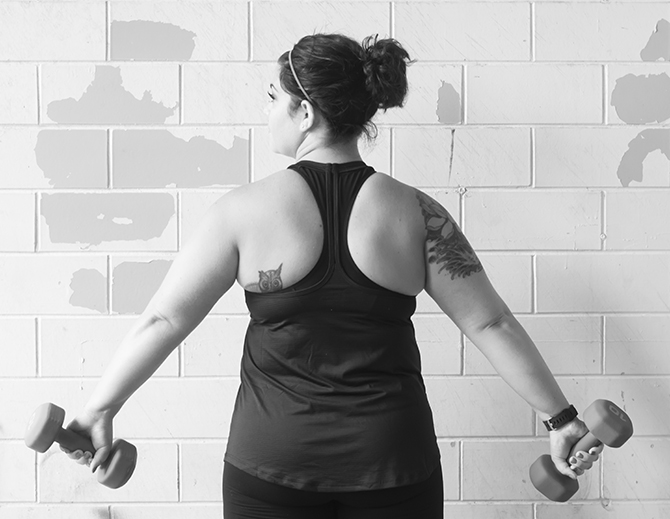 There’s another motive for Erin to maintain her healthy lifestyle. “I’m a corporate recruiter for a manufacturer. We have a wellness screening to get points on insurance deductions. They measure your blood pressure, waist size, and cholesterol, among other things. That’s how I know overall that I’m very healthy. And I’d like to thank Jazzercise for that.”

Know someone with a Best (Healthy) Body? We are looking for women to feature in our August special issue. Nominate yourself or someone here.