After an ADHD Diagnosis

After an ADHD Diagnosis 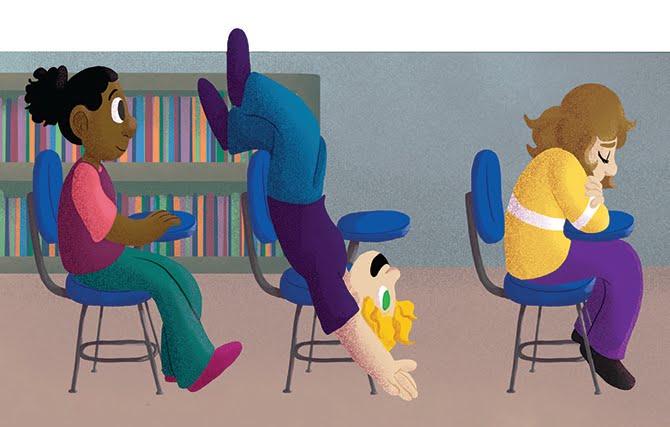 Henry was never a stereotypically easy child. According to his mother, Scheri Mullins, he was excessively energetic and prone to tantrums. Although highly curious and intelligent (he learned to read before kindergarten), he wasn’t particularly verbal and had difficulty with fine motor skills. Scheri had him evaluated for developmental delays as a young child, before preschool even, and he had received speech and occupational therapies as a toddler. But he was a first child, and Scheri and her husband Chris were assured again and again that his behaviors were “normal” and nothing to be concerned about. It wasn’t until he enrolled in a small private kindergarten, with just seven boys, that a teacher voiced her concerns about Henry’s behavior and suggested that he should be evaluated for ADHD. By this time, Henry had a little sister — a very calm little sister — and Scheri could see the sharp contrast between her two children.

“We weren’t surprised at all. He was a little hard to manage, and we were relieved to have a teacher that didn’t write him off,” Scheri said.

Henry’s teacher set up a formal ADHD evaluation with a social worker through 4-C, Community Coordinated Child Care. When the evaluator came to observe Henry, her report indicated that Henry’s hand was the first to shoot up and answer the teacher’s questions just about every time, but he happened to be completely upside down in his chair, raising his hand, enthusiastically, toward the ground. The other students around him were continually distracted, so the Mullinses were referred to a psychologist for a formal evaluation of Henry’s possible ADHD. After a three-hour round of testing with a certified clinical psychologist, Henry was officially diagnosed as twice exceptional: gifted with ADHD, sensory perception and possible autism spectrum disorders, which were later confirmed.

“We were new parents, and we just didn’t know what to do, so the diagnosis gave us something to name and research. We are very cerebral people, so this gave us direction.”

Henry began his treatment at age five. He was placed on stimulant pharmaceuticals that showed immediate results. “Once he started the meds, he became more in control of himself; he became a better version of himself. If he goes unmedicated now, he gets in trouble and his self-esteem is affected,” Scheri notes, but, like many children on these drugs, his appetite suffers. Scheri says Henry is a very thin young man and she has to supplement his diet with extra protein.

Henry’s educational journey has been rich, to say the least. Through pharmaceuticals, private counseling and coaching services, occupational therapy, private schooling, and continual checkups at the doctor’s office, the cost of ADHD adds up. He is reevaluated every three years, as some ADHD symptoms drop off as children mature. Last August, the Mullins forked out $1,000 for testing, not to mention the cost of private high school.

According to Dr. David Causey, clinical psychologist and specialist in childhood development with Square One in Louisville, many patients are not diagnosed with ADHD until middle or high school, when parents notice a substantial drop in grades. At this time, the academic load makes it difficult for students to compensate for their lack of organization, poor time management, or inability to complete tasks. Henry’s experience with ADHD is similar to this trend.

While Henry made straight A’s in his public elementary school, his grades began to dip in the middle grades. Scheri advocated for Henry to be evaluated for a 504 Plan through JCPS. This proved challenging as Henry was a gifted child, and it was difficult for his teachers to see the need for added supports — after all, he was still making B’s, but Scheri knew Henry was not living up to his potential. Scheri eventually succeeded in getting Henry accommodation, and a 504 Plan was put into place that legally granted Henry preferential seating upfront to maintain focus, extended time on assignments and tests, and the use of a keyboard for note taking and assignments to offset his fine-motor disabilities. When high school came along, the more complex content and increasingly demanding social scene warranted the Mullinses to leave public school and pursue a private education where Henry would have access to more resources and smaller class sizes, a combination necessary for his ADHD and autism spectrum disorder. Now, Scheri and Chris are preparing for the next educational journey: college. They know Henry will need a small university where he is less likely to get physically and metaphorically lost. Children with ADHD are more likely to suffer from substance abuse, more likely to drop out of college, and more prone to accidents.

“I worry about his ability to manage practical living skills. He’s socially awkward and can’t find his way out of a paper sack. We are about to send him out into the world to manage his own money, drive a car, show up on time, turn stuff in, and do his own laundry. We’ve managed so much for him, I worry about whether or not he can do it on his own. He has an Apple watch that reminds him to take his medicine, but he’ll tune that out. It’s been nerve-wracking,” Scheri says.

But it’s also been a joy. Henry is capable of highly intellectual discussions and sees things differently than most kids his age.

Scheri’s advice to parents that have recently received an ADHD diagnosis?

“When you get the initial diagnosis, let yourself grieve. You will grieve because you will worry about the future. We knew our son was going to have to face more struggles than other kids. But grieve and then educate yourself. You will have to be the advocate for your child the whole way, so do your research and find other parents experiencing the same thing. You aren’t the only one; brainstorm solutions with other parents through social media [or support groups]. If you don’t, the child loses everything.”

And Then There was a Girl
Scheri’s sister Sara Alvey was no stranger to ADHD. She was an elementary educator, she observed Scheri’s struggles with Henry throughout the years, and her husband was diagnosed with ADHD as a child. But when her only child Payton was born and began exhibiting symptoms of ADHD, it took a while to put the pieces together.

Sara first noticed that, as a small child, Payton was disinterested in her toys. Henry used to fixate, even obsess over his play things for long periods of time. (One myth many hold about those with ADHD is the inability to focus. According to Dr. Causey, people with ADHD exhibit hyperfocus on subjects that interest them, but the mundane, i.e. chores and homework, are what cause an inability to hold focus.) Payton would jump from one toy to another without any extended play; nothing seemed to hold her attention. She did not exhibit any of Henry’s hyperactivity or impulsivity. In her early years of school, she was never a behavior problem; she just seemed to get distracted and needed a little redirection after directions were given.

It wasn’t until second grade that a teacher recommended Payton, now almost 9, be tested for ADHD. The teacher documented that Payton had a difficult time with directions and had to be redirected in small groups. She had difficulty focusing her attention to task. At home, Sara was struggling with Payton’s tantrums. Like Henry, she was very routine-oriented and didn’t handle change well.

“I was getting frustrated at home. I couldn’t understand why she couldn’t give me 20 more minutes of focus on her homework, and her tantrums were extreme. Every year we’d think she’ll outgrow them. But anytime she didn’t get her way or if her routine was broken, she’d go into a tailspin of screaming violent words, beating on the walls, and breaking things. You couldn’t rationalize with her during her tantrums; we’d just have to wait it out. We were worried that she’d hurt herself,” Sara said.

Sara mentioned these concerns to her pediatrician, and she was referred to Square One for a formal evaluation. Payton was given a dual-diagnosis: ADHD inattentive type and Disruptive Mood Dysregulation Disorder. The latter behavior disorder is treated with a mood stabilizer, and she takes Concerta for her ADHD. In addition to the medication, Payton and her parents also participate in monthly behavioral therapy sessions. Payton has been given strategies to cope with her anger, and Sara is learning the delicate balance between what Payton’s brain is capable of and what she is choosing to display.

“The full battery of tests gave us a better picture of what was going on inside her little brain. Hearing that we didn’t actually suck as parents — that there was something causing her behavior and that she needed extra support to manage it — was incredibly helpful to us. I remember listening to Henry’s stories and thinking, how bad can it really be? Turns out, it is really hard to raise a child with ADHD,” Sara says with a laugh.

“She gets home, and we don’t get to see the best version of Payton. She controls her behavior all day at school, and is often worried about what her peers and teachers think of her, so by the time she gets home, she’s exhausted. Her symptoms have always been worse in the morning and at night, so we try to keep things routine and get her plenty of exercise.”

Payton plays soccer two or three nights a week. Sara says the physical discipline is a helpful tool in managing her behavior disorder. She is also a firm believer in pet therapy. Since Payton feels remorse for her behavior and is highly concerned with how others view her, she will self-correct her behavior if she feels like she is scaring the family dog.

At school, Payton has received a 504 Plan that grants her access to written directions, a snack, a quiet environment if requested, and extended time on assignments and tests. Sara anticipates that as Payton progresses in school, her inattention to task will be more difficult to manage. In third grade, she gets multiple chances to perfect her assignments; as she ages, the stakes will get higher.

“There are many multi-step directions in school. She said, ‘Mommy, I know there were three steps, but my brain can only hold two things.’ That is going to be a challenge, but my main concern as a mother is teaching Payton to advocate for herself. Grades are not the be-all-end-all to me. I want her to learn, of course, but I also want her to take care of her social/emotional health.”

Dr. Causey says that the ADHD inattentive type is noteworthy for several reasons. It is the only subtype of ADHD that goes underdiagnosed. It is usually not diagnosed until adolescence, when the academic rigor becomes unmanageable. Students with inattentive subtypes are often “under the radar” in classrooms as they are not behavior problems and try to compensate by working harder. When their hard work is no longer enough to mask their disorder, they often become frustrated, unmotivated, and demoralized. Students with ADHD usually have average or above average intelligence, but their grades don’t often reflect their intellect.

This type is most frequent in girls, who work hard to please within the classroom. Girls who go undiagnosed often suffer from depression and lose hope for their academic future. That is why it is so important to diagnose this type of ADHD, so that girls like Payton receive the support they need before their self-esteem is damaged and their amazing potential is squandered.

Need Help?
A social worker, your pediatrician, or a licensed psychologist can diagnose ADHD. Square One recommends seeking a psychologist because a diagnosis only requires an evaluation of a parent and an educator’s checklist of symptoms. Sleep disorders also have similar symptoms.