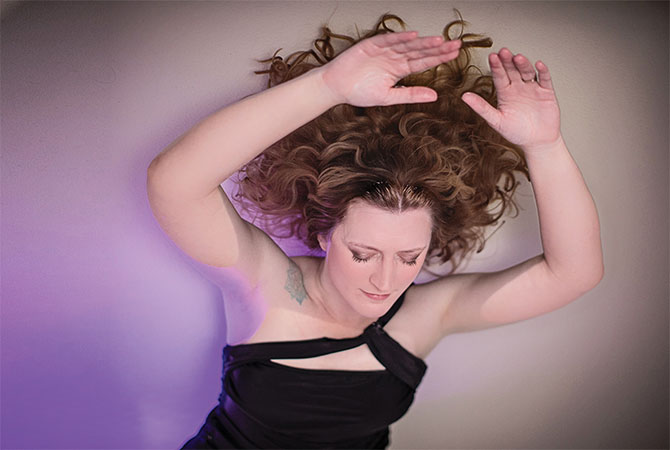 Kim Hannan’s turning point came when she realized she hadn’t made her health the top priority. Now, she is embracing a new life of self-care and showing others how to let their stress float away.

Kim Hannan had a hard choice to make and was at a crossroads at the end of 2017: throw her successful career out the window to build a brand new, unproven vocation in New Albany, Indiana, or uproot her family for a guaranteed lucrative move to Chicago?

The Fortune 500 company she had built a rewarding career with for more than a decade made it clear they wanted her present at corporate headquarters, some 300 miles away. Added to that pressure was the reality that Kim’s salary provided the fiscal foundation for her household. The stress of that career had already driven her to seek relaxation and solace through yoga classes at her gym.

“Like many women, I was raised in an environment where it was all about working, working, working, and you put everyone else first,” Kim reflected. “While that is a very noble gesture, it’s not sustainable. I have witnessed firsthand how it really deteriorated the health of every woman around me who took that approach.” 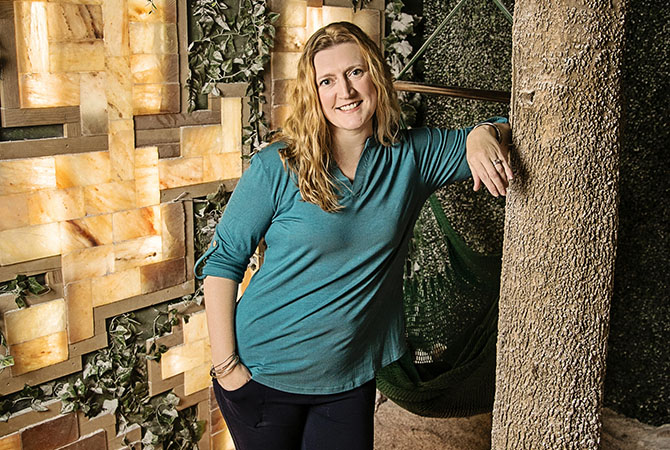 Kim Hannan practices self-care by floating at Sukkhino Float Center, which she co-owns with her husband and is the first of its kind in Southern Indiana.

She realized that self-care made a huge difference in the way she felt and how she processed stressors in her life. The more she took care of herself, the less stressed she felt, no matter the circumstance. “I became more present and available to my family,” Kim said. “It’s not selfish. You don’t think of it as a luxury to change the oil in your car as necessary maintenance; if we treat our bodies like machines, we need to care for ourselves in much the same way.”

After a few years of yoga, Kim began reading about the benefits of something called “float therapy,” or Restricted Environmental Stimulation Therapy (REST), which has been around since the 1950s but has exploded over the last decade. Essentially, float therapy is the practice of lying face up in a tank or pod in 10 inches of water that is heated to body temperature and infused with more than 1,000 pounds of magnesium sulfate (Epsom salts). Your body floats effortlessly in zero-gravity simulation and your mind relaxes with little to no distractions or stimuli present. 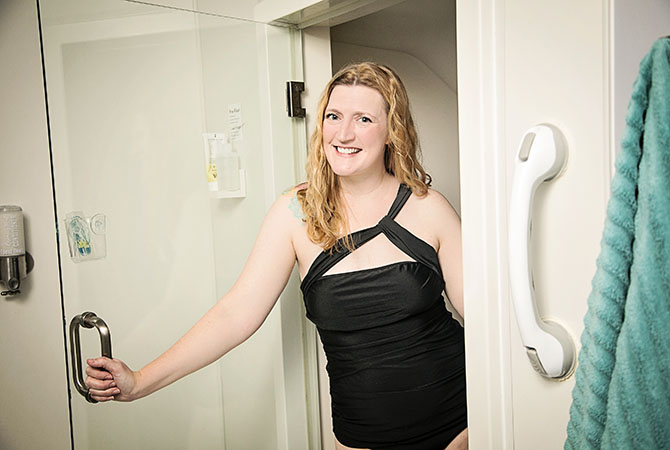 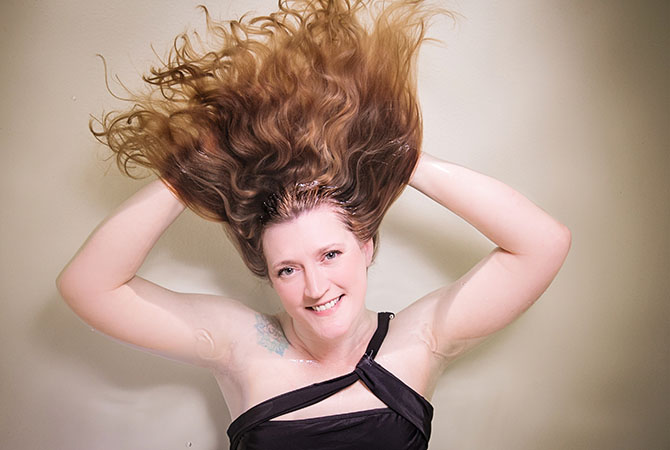 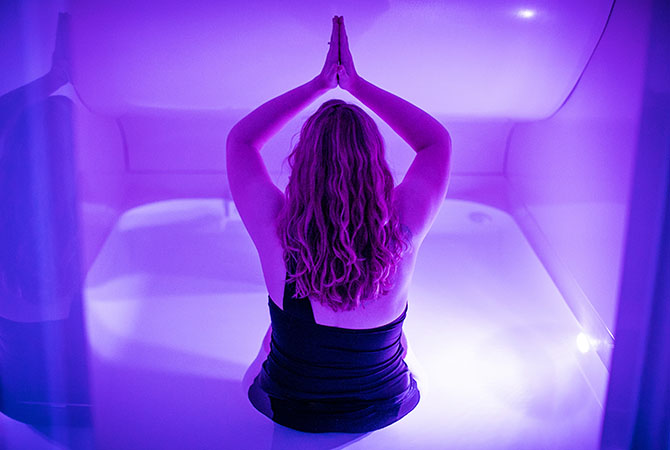 When the Weightless Float Center opened in Louisville, Kim was so elated that she took her mom. “She has fibromyalgia, and I was hoping it would relieve some of her pain,” Kim says. “My sister called me almost a week later and asked what I had done to our mom, and to do it again because it helped so much!” The experience solidified what she had been thinking for some time: that one day, she and her husband would own and operate a float center of their own.

In 2018, they did just that. Facing a major move to Chicago with their two young children, Kim and Graham examined what they wanted for their family and made a big decision. Kim left the corporate world, and together, they created the first float center in Southern Indiana — the Sukhino Float Center & Salt Cave, 802 E. Market St. in New Albany, Indiana.

In addition to co-owning Sukhino Float Center, Kim also runs a boutique marketing and consulting agency, co-hosts the Art of the Float podcast, and is president of the non-profit Float Conference.

The float for her is a time to consider her thoughts. “People think meditation is the absence of thought, but really meditation is becoming aware of what you’re thinking, noticing that you’re spiraling into a place of stress or that you’re making this long list of all the bad things that are happening in life.” 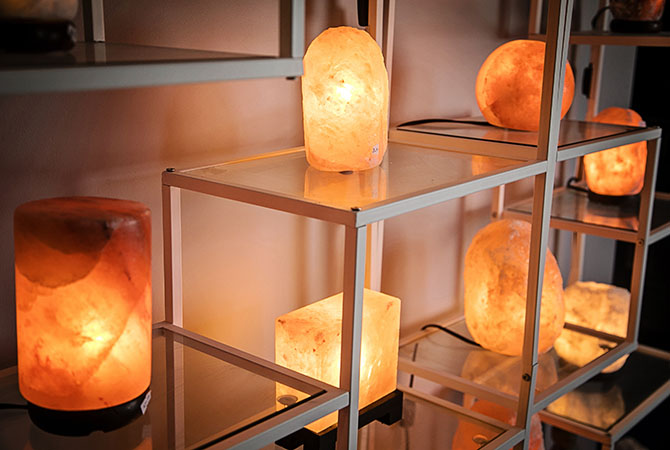 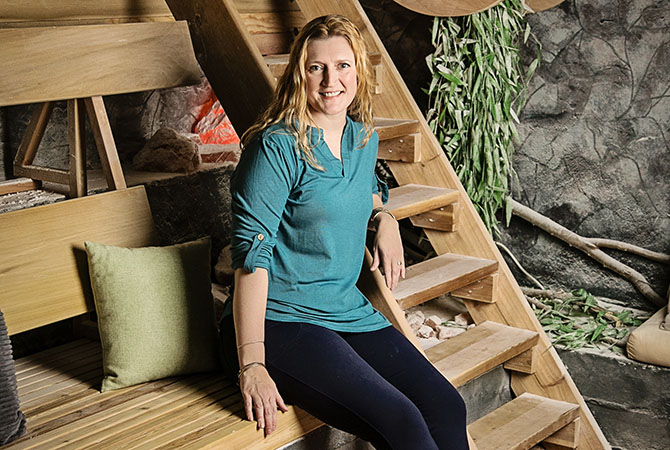 Family time is also a place of focus for her. At least once a week at 5 pm, Kim said they put their phones down and watch a movie, play a game, or go out together.

She taught her kids early on to take a minute and slow down, focus on their breathing, and be aware of what they’re feeling and why. She talks about acknowledging their emotions, including things that make them angry or sad.

“Running yourself ragged and snapping at people because you’re tired is not only the unintentional example you set for your kids; it’s permission to do the same,” Kim explains. Her children practice meditation with their peers now, and says her daughter’s theater class takes a moment every time they meet and before every performance. “It’s amazing just how powerful it can be.” She adds, “One of the greatest gifts we can give anyone else is permission to be well.”