When It Comes to Style, What’s Your High/Low?

When It Comes to Style, What’s Your High/Low? 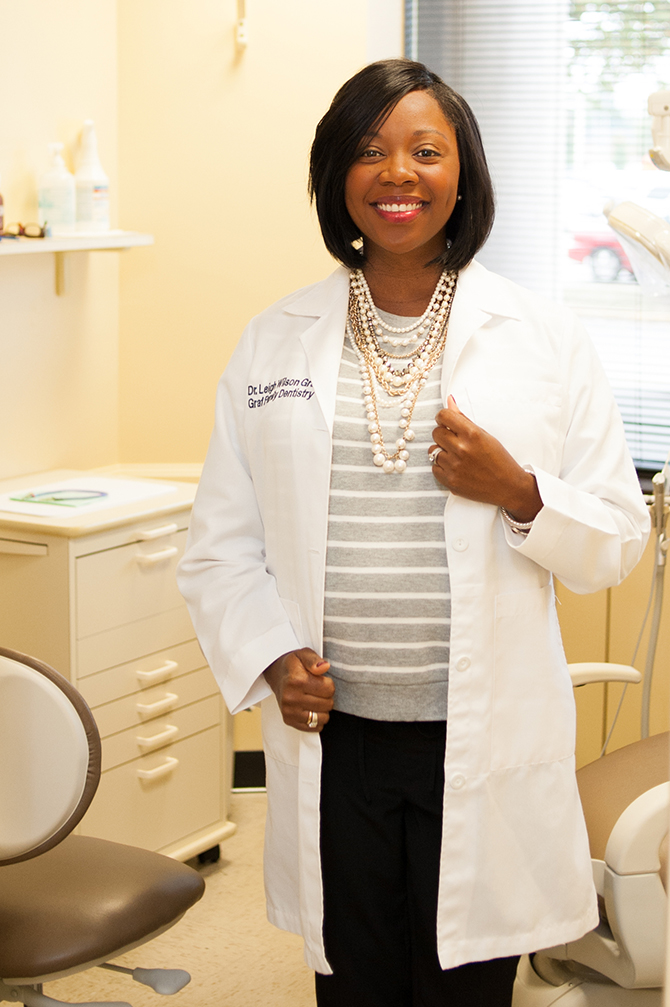 This stylish dentist and second-time mom-to-be knows when to go for the designer price and when to shop the clearance aisle. Do you?

If you’re like me, you think that people who work in the medical profession are off the hook when it comes to fashion. Isn’t that the point of scrubs? They are basic, boring, and comfortable. But not all medical professionals ascribe to scrub-a-day styling.

Dentist Leigh Wilson-Graf knows she’s representing her practice Graf Family Dentistry, when she’s out in the community. Basic scrubs aren’t an option for her. “When I have lunch meetings, attend a continuing education course, or pick up my kids, I’m handing out my card. I still need to look professional,” says Leigh. “I own a business.”

When you work in a doctor’s office, you layer.

I always thought doctors wore white coats as a sign of prestige, but Leigh let me in on a secret. The white coat is PPE or personal protective equipment. It’s another layer of defense. (Imagine the spittle on your bib while getting your teeth cleaned. I get it. Stuff flies out of people’s mouths.)

Leigh, who is pregnant with her second child, relies on layering to offset the bulk of the white coat. She opts for washable, light clothing she can easily remove. “The white coat eliminates a lot of cute sweaters,” says Leigh. Chunky sweaters, such as a cowl-neck, are banished from her workday attire and not just because of the bulk. Dry cleaning isn’t cheap.

Rather than spending money on hefty professional laundering bills, Leigh would rather splurge on Tory Burch flats (she has seven pairs) or Coach loafers. While she may find some of her tops at TJ Maxx and Target, her makeup comes from MAC. “Some of the things I splurge the most on are makeup and face products,” says Leigh.

Leigh uses Perricone MD products to wash and moisturize her face. She keeps her makeup for work simple. She concocts her own tinted moisturizer from MAC foundation and Perricone’s moisturizer. From there, she adds blush, brow shadow, and lip gloss to complete her look. Note: She is the one woman I’ve ever interviewed who does not wear mascara. I repeat, this woman does not wear mascara. I’m still reeling from this anomaly.

When you live on a reservation, you learn to shop online.

Before Leigh and her husband, Trey, returned to Louisville and bought their current practice, the couple lived on the Lakota Sioux Reservation for two years. Because the area was underserved medically, the couple received incentives such as a reduced student loan amount. “We had just gotten married, so why not try it? It was really good for us,” says Leigh. “We were the only dentists for 10,000 people.”

Because it was such a rural area, the nearest Target was two-and-a-half hours away and the nearest mall about three hours. “I got really good at online shopping,” admits Leigh who patronizes online retailers with customer-friendly return policies. While on the reservation, Leigh fell in love with 6pm.com, Zappos. and Nordstrom. “I became a Nordstrom shopper because its customer service is amazing. They take merchandise back, no questions asked. They’ll take it back in store or online, Nordstrom, or Nordstrom Rack,” says Leigh.

As for local retailers, you can find Leigh anywhere from Von Maur to Old Navy. Her two favorite local boutiques are Collections and Apricot Lane, both located in Westport Village. “I used to be passionate about the trends, but as I’ve gotten older, I tend to go way more classic,” says Leigh. Trendy or classic, Leigh opts to strike a balance with where she puts her dollars in her closet.

Do you splurge on any clothing or accessories? What is one item you think is worth the expense?