What Connie Leonard is Watching

What Connie Leonard is Watching 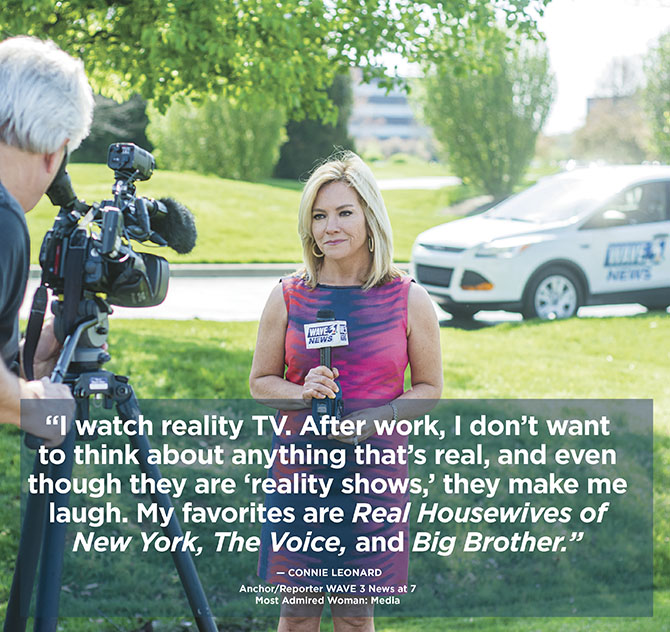 Oddly enough, after 20 years reporting the real news for WAVE 3 News, Connie Leonard finds her relaxation and laughs by watching reality TV. Her recurring nightmare is one in which she arrives late and misses the live shot for a broadcast story. She recently changed her work schedule so she can take her daughter to school and be home in time to tuck her in at night. You might be surprised at the person she would like to interview today. Photo by Melissa Donald.

Turning Point?
I was working for WLKY when I got a call from Kathy Beck, news director at WAVE. She took me to lunch and offered me a job. As I wasn’t under contract with WLKY, I accepted. That was 20 years ago. At first I did a lot of travel. I covered the Final Four. I went to Toronto for the Pope’s visit. I was in Atlanta for the Olympics during the bombing and in Salt Lake City for the winter games.

Learned over the years?
I’ve learned to make sure to always get both sides of the story. Talk to as many people as possible. Fact check everything.

When did you have the first inkling that you would go into broadcast journalism?
My dad and I watched the evening news on TV every night, and we would discuss the stories over dinner. Seeing the visual of what was happening abroad was so impactful. In college I worked on the school newspaper and had also worked at a radio station. I explored still photography, but I knew from childhood that I liked the broadcast medium to tell a story.

Accepted about yourself?
That I can’t do everything all the time. I was raised as a ‘yes’ person. I always felt guilty because I thought I wasn’t doing enough. Today, if I can’t do it, I’ll let it go.

Guilty pleasure?
Give me a bag of salty Kettle chips, and I’m your friend forever.

What is your current schedule?
At first I didn’t get home until after midnight. I was anchor for the 7pm news and reporter for the 11pm news. I wouldn’t get to bed until 2am and, because I wanted to take my daughter to school, I was only getting three to four hours of sleep. So two years ago I changed my schedule, and now I am at the station from 10:30am to 7:30pm, which means I can take her to school and also be home in time to put her to bed.

A trait you dislike about yourself?
I am more accepting of who I am now. Perhaps I am a little too skeptical. I listen, but I’m still skeptical. I’m not as open when I hear the story the first time.

First working experience?
My parents owned Leonard’s Grocery, a mom-and-pop grocery store in Elizabethtown. I started working there when I was 12. They had it for 40 years and loved it.

How do you relax?
I watch reality TV. After work, I don’t want to think about anything that’s real, and even though they are ‘reality shows,’ they make me laugh. My favorites are Real Housewives of New York, The Voice, and Big Brother. I’ve interviewed a lot of celebrities on the red carpet at Derby, but if Bethenny Frankel from Real Housewives shows up, I’m more excited to meet her or any of the reality stars. That’s when I find myself saying, ‘I can’t breathe right now.’

Advice for someone coming up in broadcast media?
Master social media. For young people, being well-versed in social media is huge. It connects you with so many more people.

Who would you like to interview today?
Peyton Manning. I want to know how he is spending his private time after spending so many years in the spotlight.

What’s the biggest issue facing America today?
Drugs. From our coverage in the last five to 10 years, I know that so many crimes are fueled by drugs.

What makes you angry?
If I feel someone isn’t being truthful. Also, when I am on deadline and my computer crashes.

Fears?
I’m so focused on time management, I have a recurring dream that I’m headed to a live shot and I just miss getting there on time.