Wearing Your Story on Your Sleeve

Wearing Your Story on Your Sleeve 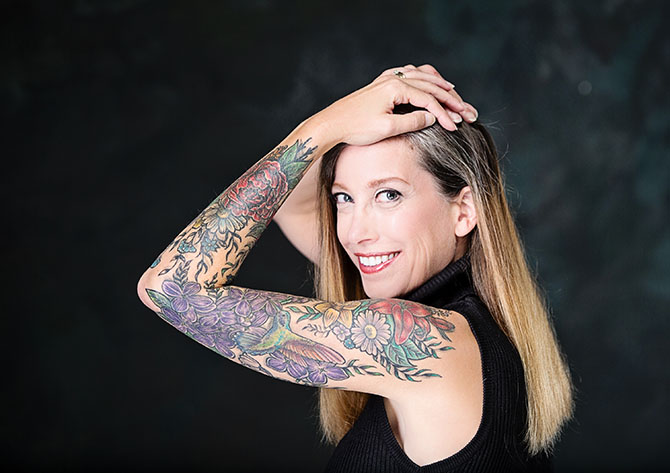 Tracy Kroencke got her first ink at age 50. Her children talked her in to getting a full sleeve, and she loves it. Artist: Travis King; Time invested: One year’s worth of 4-hour sittings.

For thousands of years, and in almost every ancient culture, tattoos have adorned the skin of women. From the Egyptians to the Maori, the Peruvians to the Vikings, female ink work has been found on the abdomens, thighs, and faces of female remains. Used as beautification, amulets for protection or fertility, or markings of status, love, or punishment — tattoos have told the stories of the mummified bodies that housed them.

Today, tattoos remain a consistent and personal display of art, devotion, and symbolism. Etched in ink across our largest organ, tattoos continue to be a permanent way to document what we deem significant and to demonstrate our legacies, even if deeply private and only to ourselves. In this feature, read the very personal stories behind five women’s tattoos. From memorials of loved ones, odes to heritage, reinvention, or symbols of core values, these tattoos speak the truths of the women that adorn them.

Tracy Kroencke had always been slightly aloof to the tattoo trend that seemed to leave its mark everywhere — even on her own children. But after a big move that uprooted her life in Illinois and transplanted her in the Bluegrass state, a change in careers, and a global pandemic, she ached to reinvent herself.

“When I turned 50, I just wanted a whole new me,” Tracy explains. “I was tired of being a people-pleaser. I had a successful career as a sign-language interpreter at big conventions like Comic-Con, but COVID-19 killed that. I took the opportunity to retire and figure out what made me happy; I was tired of working for everyone else.”

So, Tracy found herself at 50 in a new business venture, as an antique dealer for a shop she called Paddy Whacks Antiques…and with her first tattoo. “I think it is pretty funny that my first tattoo was an entire sleeve. My kids talked me into it and I thought, I’m just gonna do it.”

Tracy’s second daughter collaborated with her tattoo artist, Travis King, to compose a piece that encompassed all of Tracy’s progeny’s birth flowers. The floral cornucopia consists of two lilies for her grandfather and youngest son who passed away, the birth flowers of her children and grandchildren, hummingbirds that nod to her parents and childhood home, and a couple of lilacs that represent a familial inside joke: When Tracy moved to Kentucky, she kept it a secret from her friends in Illinois, so whenever times got hard, she would try to “just smell the lilacs” that she saw in bloom in Louisville, a heady reminder of hope for the future.

All in all, Tracy is very happy with her decision to join the tattooed brigade. “The funny thing is, people always compliment my artwork, but older people tend to ask me if I regretted getting a tattoo so young. I laugh and say, ‘This is new! I got it at 50!” 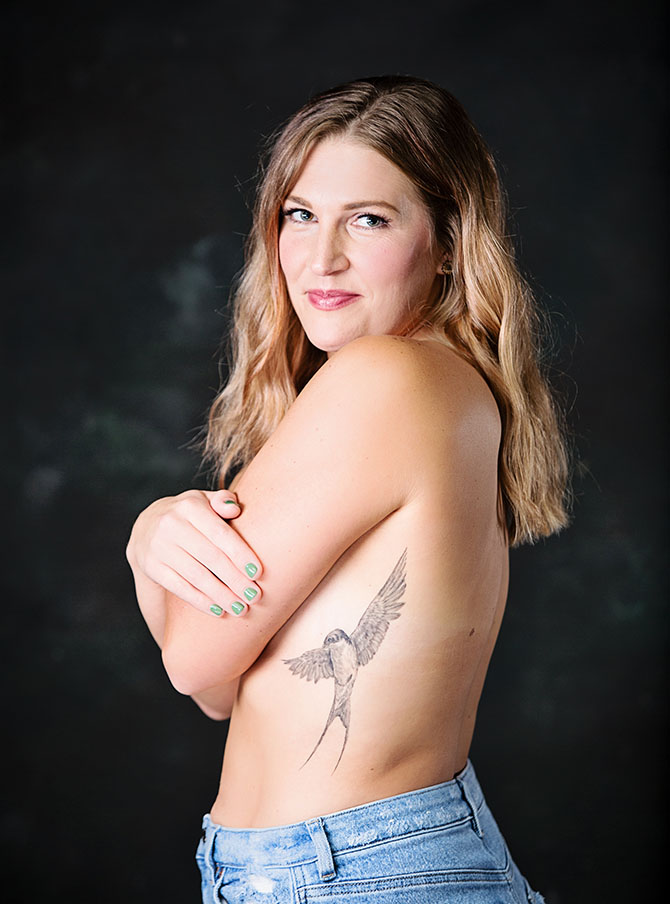 “I am much more aware of other people’s pain,” says Lauren Thomas after she experienced her own tragedy. Artist: Travis King @ Prophesy Ink; Time invested: 2.5 hours

Tragedy has an uncanny way of opening our eyes. Everything we once held true seems to enter the realm of uncertainty once grief rocks us to the core. Lauren Thomas, 32, experienced such an event last year. At 20 weeks pregnant, she received a devastating diagnosis: her fetus was not “compatible to life.”

“My doctor said the baby would probably not live to term, and on the chance that she did, she would more than likely make me sick and not live beyond the first few days after birth.”

Lauren had always considered herself pro-life, so against her physician’s advice, she decided to carry the pregnancy to term. On Father’s Day, in a hospital room during the peak of quarantine, and due to COVID-19 policies, Lauren was forced to give birth alone to a baby girl that would never breathe her first breath of air outside the womb.

“I felt like I was prepared for the outcome; I knew the diagnosis,” Lauren says, “but it was the worst day of my life.” The whole experience humbled Lauren [in a profound way] and now, she says, her heart goes out to anyone who suffers. “I know how I felt last summer, so now I am much more aware of other people’s pain. It opened my eyes to the sadness in the world, and I think differently now.” Lauren says she has developed a deep sense of empathy for others experiencing similar grief and is more open-minded and sensitive to people’s deeply personal decisions that happen as a consequence of traumatic life events.

Shortly after this devastating experience, Lauren heard the lines “Because I’m as free as a bird now” from Lynard Skynard’s song Free Bird and they spoke to her. “You wouldn’t think that a Lynard Skynard song would have such an impact on me, but it did.” Lauren wanted to feel free from the pain, so she decided to use those lyrics as inspiration for a tattoo that memorialized the spirit of her daughter. She told her artist that she wanted a soft bird, so he designed a swallow whose wings span across Lauren’s abdomen as a palpable reminder of the beauty and terror of life and death. With dark wings stretching toward the sky.