Wearing Your Story on Your Sleeve: Sopenny Chan

Wearing Your Story on Your Sleeve: Sopenny Chan 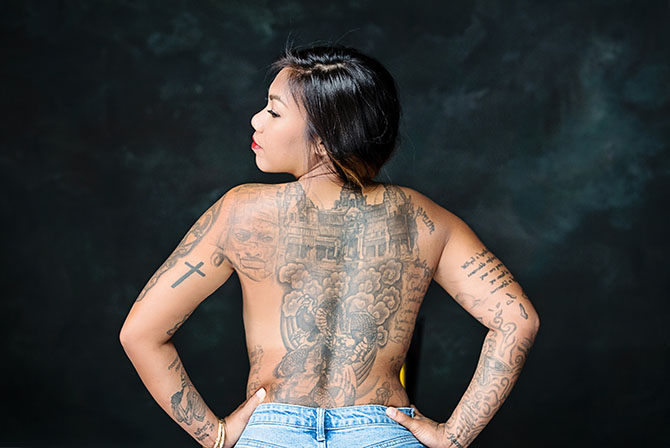 The Mark of Fortitude — Sopenny Chan

Like many immigrants who fled Cambodia during the late 1970’s Khmer Rouge genocide, Sopenny Chan’s parents left behind everything they knew and loved in order to survive. The Khmer Rouge regime was responsible for mass famine and murder of its people resulting in the executions of an estimated 1.5-2 million people — around 25% of the country’s population. Sopenny’s parents, who refused to join the government’s totalitarian and xenophobic regime, were held hostage by the government and eventually joined forces with the American army. As a reward for their assistance, they were able to seek sanctuary in Louisville by a group of Christian missionaries.

In the midst of their hasty asylum, however, Sopenny’s father, along with his pregnant wife, were forced to leave behind two children from his first marriage. The government had separated its people in order to commit their atrocious killings, coined “The Killing Fields,” therefore Sopenny’s father had no way of locating his family upon their exodus. Once in Louisville, the Chan’s worked to learn English, heal from their trauma, and assimilate to American culture.

When Sopenny became a mother herself, in 2017, she found herself reflecting deeply on the struggles her first-generation refugee parents endured. A couple of years prior, her family reconnected with the long-lost siblings they left behind — family they assumed to be dead. So, while breastfeeding a new baby and nurturing her new identity as a mother, Sopenny decided to honor her heritage by tattooing the Angkor Wat across her back. Despite the destruction of the Khmer Rouge, the Angkor Wat temple, the largest religious temple complex in the world, symbolizes the strength and splendor of her parents’ homeland. Alongside the temple, Sopenny also chose to include an Apsara Dancer, the iconic Hindu symbol of femininity and grace sewn into traditional Cambodian dress, which represents the sister Sopenny found a few summers prior.

“I wanted to show my pride and honor my parents, as well as the grandparents, aunts, and uncles that I never got to meet, and the ones who were killed in The Killing Fields by the Khmer Rouge. I’ve never been to Cambodia, but I plan to make it one of my next trips and pay homage to my family.”