Wearing Your Story on Your Sleeve: Mindi Wetzel

Wearing Your Story on Your Sleeve: Mindi Wetzel 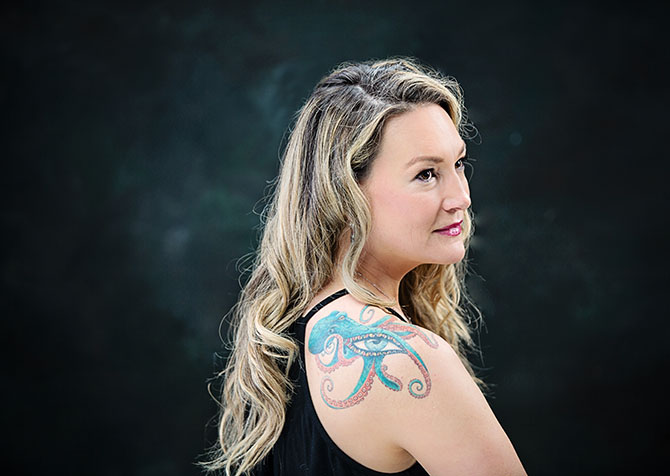 Giving Life to What Was Lost

For many years, before the discovery of the well-preserved and perfectly-tattooed “Iceman,” ancient female Egyptians were believed to display our origins of body art. Excavated tombs that date back to 2000 B.C. were found full of female remains, from notorious and royal strata, covered in tattoos along their abdomens and the tops of their thighs. Tiny black dots were found atop mummified stomachs, stomachs that expanded with pregnancy to spread out like a net and protect what was inside. Therefore, many archaeologists believe this ink work was used as a symbolic charm to protect the sanctity of life and to ward off sexual disease.

After the death of archaeologist Mindi Wetzel’s husband, she also decided to adorn her body with an amulet of protection and memorialize her late husband. Inspired by her archaeological work in Egypt and her husband’s gorgeous eyes, she decided on a Wadjet Eye inside a colorful octopus. Also known as the Eye of Horus, the Wadjet Eye is a religious symbol of protection that adorned many Egyptian tombs.

“My husband was always very supportive of my work, which would take me away from our family for two to three months a year. He would stay with our daughter while I traveled to Egypt, so I wanted a symbol of his support. The tattoo artist used a picture of his real eye, so his eye is literally on my shoulder watching over me, reminding me he has my back,” Mindi says.

As for the octopus, Mindi has been fascinated with their intelligent and adaptable natures since she was a child and saw them for the first time on a trip to Florida. Perched on her shoulder is the marriage of this brilliant creature, whose skin works as its “third eye” to sense trepidation and shape-shift as a means of survival, and her husband’s protective eye — a tribute to his life and spirit and to the resilience that allowed her to move forward without him.