Wearing Your Story on Your Sleeve: Aliyah Gray

Wearing Your Story on Your Sleeve: Aliyah Gray 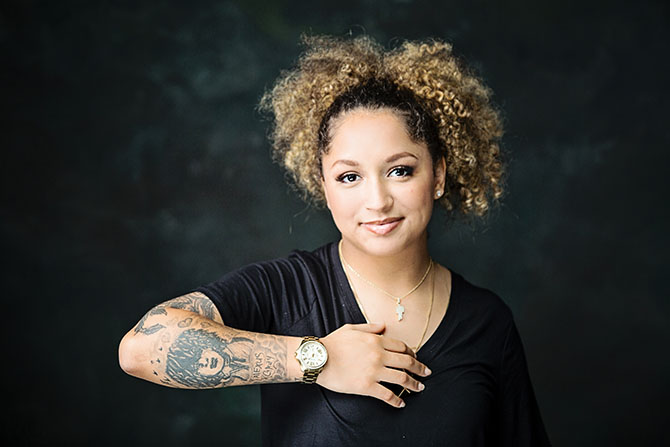 Part of Aliyah’s tattoo also includes a dreamcatcher inspired by her sister’s love for them. “She had a five-layered dreamcatcher she slept under every night.” Artist: Lamar, Ink by Unk; time invested: 2 hours (for the first part of her tattoo).

Aliyah Gray has found healing through paying homage to her sister Alexus who – along with her boyfriend Isaiah – died in a car accident in July of 2017. She was 16 years old.

Shortly after Alexus’ death, Aliyah decided to get a tattoo sleeve reflective of her sister’s character and interests. The first part of her sleeve, located on the inside of her right arm, shows a rose, feather, bird and butterfly with a banner that includes the name of her sister and Alexus’ boyfriend. “My sister was into butterflies and the way he has the feathers and the bird looks just like the [design of] the urn she is in,” she says.

Aliyah had no misgivings about going through the process – even after fainting. “I passed out in the first 15 minutes, because it hit one of my nerves…but I hung in there and knew it was for my sister…I just wanted to hang in there so that I could get it done and see what it would like when it was finished.”

After the completion of this tattoo, Aliyah says she “realized she had to make it a full sleeve.” The inspiration for the next part of her sleeve came from a self-portrait Alexus created in high school. Using a technique called lino carving, Alexus carved an image of her face onto a clay board. Aliyah had the same image tattooed onto her arm. “It is a beautiful way to memorialize my sister. It is right there. I can look at it any day and any time,” she says.

For the last section of the sleeve, she will have “333 Blessed” placed on the inside of her arm which signifies a shared connection between Alexus and her boyfriend. “My sister and her boyfriend were into the numbers 333, and they happened to die at the same time…I look at it in a spiritual way,” she says. Being able to look at these tattoos gives Aliyah comfort, because it allows her to celebrate Alexus’ life every day. “She was very sassy, but very funny as well. She was different, and she didn’t care what anyone else thought of her…very one-of-a-kind.”