The Right Way to Go to London

The Right Way to Go to London

Denise Manecke’s London vacation might inspire you to head across the pond. She has ways to save money and time.
By Torie Temple

The Royal Family, afternoon tea, and Harry Potter might be a few thoughts that come to mind when London, England, is mentioned. But you might also think of how expensive a proper English vacation must be. Luckily, Denise Manecke discovered a way to see all of London’s sites that saved money and time.

“I arrived at roughly 7am, which I believe was 1am in Kentucky, and I wanted to take a nap,” says Denise, recalling her first moments after landing in London in October 2015. “The (friends that traveled with me) that were with me told me it’s best to just get out and about as soon as possible and then head to bed early to get adjusted to the time change. We checked into the hotel, they stowed our luggage, and I freshened up with my carry-on items, then we hit the city. Once evening came, I was exhausted and got a good night’s sleep for the next few days of sightseeing.” 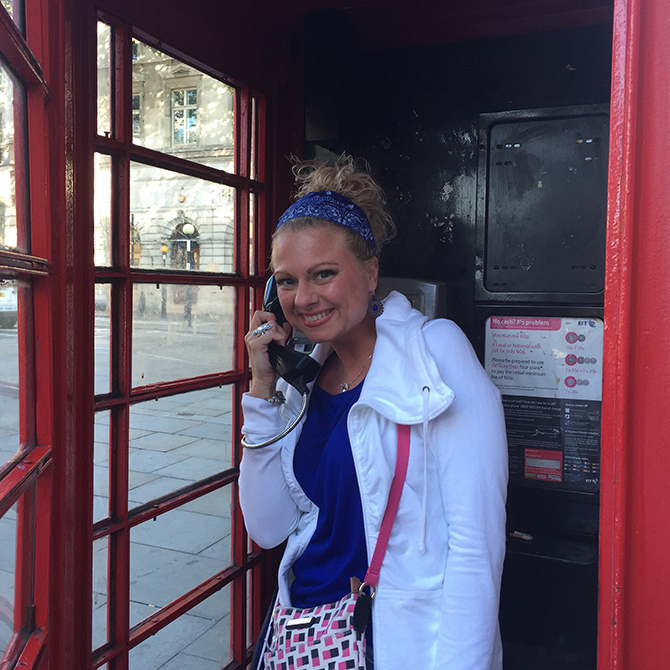 Denise knew exactly where she wanted to visit during her trip, as she had researched sites on her computer before her journey began. That’s how she found a pass that had big advantages. “I am a crazy internet research person when I am about to take a trip, and I wanted to see all the normal tourist sites,” she says. “So I got the London Pass that allowed me to see all of the sites.”

Purchasing a London Pass gives sightseers a choice of more than 60 attractions, museums, and tours at a discount with the privilege of not having to wait in lines. The entry fees to the sites and transportation costs are included in the price of the pass. “With the pass, you can use the double-decker bus that you can catch right outside the hotel,” Denise says. “The pass also helped out with the lines because you get to go in a separate line. When we went to the Windsor Castle, there was a line around the building, but we got to skip all that and walked right in.

What I also liked about the pass was that it allowed you to do things you may not have had on your list. We got to go on a river cruise on the Thames and go under all the bridges. There was also a cruise where you could see all the places the Harry Potter movies were filmed. The pass also paid for my train ride back to the airport.”

Even without the London Pass, transportation is never a problem when you stay where Denise did. “I really liked staying at the Hilton at Paddington Station,” she says. “I stayed with two other people, and we had a suite that was separated so that you had your own entrance and bathrooms. The hotel is right off the train station — it is actually a train stop. You can take a direct route from the airport to the hotel. When you get off the train, you go through the station, and you are in the hotel.”

With the London Pass in hand and transportation at your fingertips, you’re set to see all the sites that make up London’s history. Big Ben, the Tower of London, and the London Eye are always at the top of the list, but Denise wanted to make sure she saw everything royal. “I love the Royal family,” she says. “We went to Kensington Palace and tried to sneak a picture at Westminster Abbey, where there were tons of graves and memorials for the Royal family and priests whose headstones were sometimes under our feet.” As the royal coronation church, Westminster Abbey encompasses the history of the United Kingdom behind its stained glass and is the final resting place for several significant people in history.

Also on Denise’s list of royal stops was Windsor Castle, where she had the best meal of her trip during afternoon tea. “We went for the day and enjoyed the countryside and the Windsor Castle as well as afternoon tea at The Harte and Garter Hotel and Spa,” she says. “I wasn’t a fan of the food in London because it was so different from what I am used to. The meat is different, and it is just a whole different palate, but afternoon tea at Windsor was very good.”

Windsor Castle is the oldest and largest inhabited castle in the world and has been a home for kings and queens for hundreds of years. It is a residence for Queen Elizabeth, who spends most of her weekends there. It takes about three hours to tour this castle on the hill, so comfortable walking shoes are recommended.

After immersing herself in all that is royal, Denise had one more stop. “I had to go to Abbey Road where the picture for the Beatles’ album was taken,” she says. “I had my heart set on taking my picture crossing Abbey Road. I also wanted a picture of Abbey Road Studios because I am a big music person and so many people have played there. Recently, it was Lady Gaga.”

The famous Abbey Road photograph of the Beatles was taken by Iain Macmillan and graced the cover of the group’s last album. It has since sparked a phenomenon of tourists quickly posing as they cross Abbey Road. (You don’t have to go to London to watch a gaggle of tourists try to get the perfect picture. The Abbey Road Crossing Cam streams a live feed of this active crosswalk.)

It’s easy to romanticize London with its well-preserved history, surrounding rolling countryside, and sophisticated royalty. It would be hard not to feel like a princess while walking through the rooms of an old castle or like a beloved rock star as you plant your feet where legends once did. All you need to get there is a ticket to ride.

Need ideas on a nice weekend trip you can take before summer ends? Think about visiting this place.