While most of us watched Houston wade through the massive flooding of Hurricane Harvey, Helen and John Faith braced themselves for the next storm. Far out at sea, the warming Atlantic Ocean was fueling a budding Irma to become the next potential Category 5 hurricane of the season. Since January, the Faiths had spent all but five weeks on the Caribbean island of St. John, building their ideal vacation property and potential retirement home. The couple, who typically reside in their lakefront and landlocked home of Borden, Indiana, were no strangers to vacation property or to the temperament of hurricanes, however. They’d built —and rebuilt — after Ivan in 2004 on the Gulf Coast and had most recently sold their property in Costa Rica. Real estate and coastal vacation property had been part of their lives for decades; buying and selling property with a bit of a risk is what allowed them to retire early from each of their respective careers.

So, when news of the intensifying hurricane spread across the island, Helen began her task of hunkering down and preparing for the worst. While many of the locals watching the weather agreed the storm would head north and miss their precious island, praying for the best, Helen kicked into survival mode. Here’s the story of how this Midwestern retiree rode out the massive hurricane.

Tuesday, September 5th
Since the Faiths had a lot of experience and a little luck in real estate, they decided to build their dream home in St. John. Through trial and errors, they had realized just what they needed out of a vacation property and decided to build more of a minimalist space. They first built a one bedroom wooden cottage in the corner of the lot, where they reside while they oversee the construction of the vacation rental in another area of the lot.

With Irma approaching, the Faith’s boarded up the doors and fastened the shutters on the cottage. They secured all the building materials at the construction site. Finally, Helen began packaging a weeks’ worth of food and water inside suitcases so that, should their possessions be strewn all over the place, the food would remain intact inside the luggage. (Brilliant, I would have never thought of that.) Because sheltering in the wooden cottage was too much of a risk, they made arrangements to weather the storm at a neighbor’s vacation home. The owners were not on the island at the time, so they agreed that enduring the storm in the home with its concrete foundation would be ideal. The weather channels were still hopeful that Irma would either miss the island or not advance its tropical storm status. They downloaded an app that works as a two-way radio in case they were to lose power. And then, they slept. 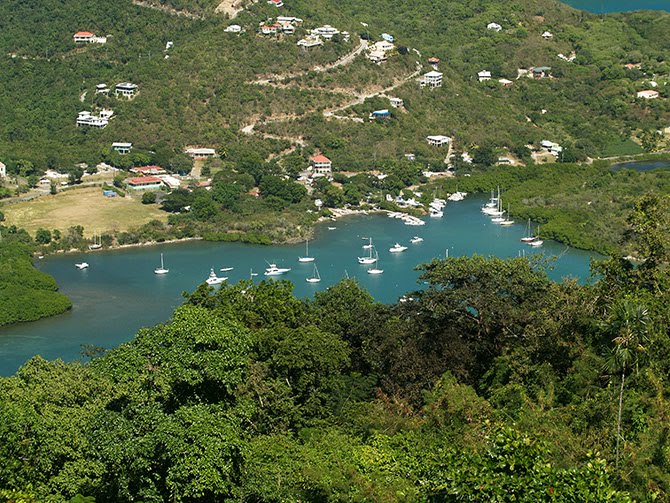 Wednesday, September 6th
In the morning, Irma was still at tropical storm status, so John and Helen fixed a hearty breakfast. “I wasn’t sure if we’d eat again that day, so I made sure we ate a giant breakfast,” Helen recalls.

The couple then made their way to the nearby property where they prepared it for the storm by boarding the windows and securing the storm shelter area. “Before the storm hit, we were so careful with the neighbors’ house. It has these beautiful, thick mahogany doors, and I told John not to bolt them closed or damage them with screws. It’s funny how fast you change your mind.” They cased the house for the best location to ride out the storm and decided to hunker down in a lower bedroom. It was tucked in a hillside and surrounded by a retaining wall that would protect them from flying debris. As the storm hit, Helen described the sound as “deafening.” They played cards in order to stay calm but saw the bedroom door bowing and decided to take cover in the adjacent bathroom. In order to drown out the noise and assuage their fears, the couple barricaded themselves in the bathroom and blared a portable radio to drown out the destruction raging outside. 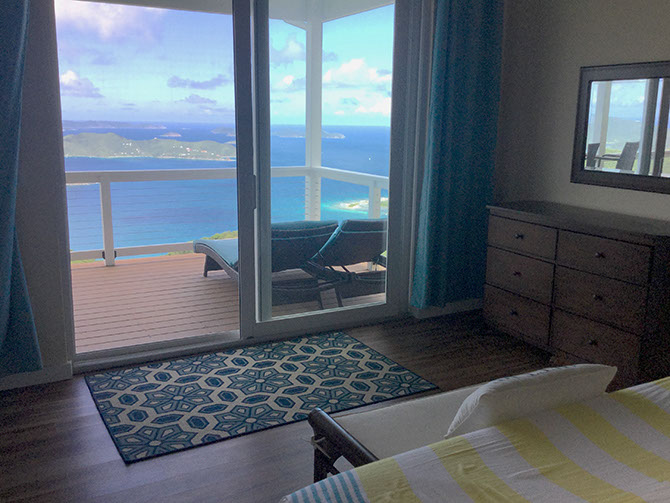 “When the storm hits,” Helen says, “your brain is so clear. You don’t even think, you just fly into action and problem solve. The adrenaline makes your mind as sharp as it’s ever been. We went from questioning whether to screw the doors shut to getting two-by-fours and getting it done.”
John and Helen took all the pillows and blankets from the bed and made a barrier between their bodies and the bathroom door. At this point, the storm was actually inside the house, and the pressure was so great that the massive doors were bowing in, windows were shattering, the water was sucked from the toilet bowl, and their ears were in agony from the pressure. Helen kept asking John if her ears were bleeding. The couple sat on the floor and pushed up against the door to make sure it held. “I looked up and noticed the mirror over the vanity shaking and told John we needed to get it out of here. He unbolted the door, opened it just enough for me to slide it out, and when I did, the mirror levitated from the pressure and wind inside the house.”

As the storm died down, John and Helen were afraid to come out of their shelter. They thought they may be in the eye of the storm and wouldn’t be able to make it back to safety when the storm picked back up. They waited in the hot, tiny bathroom for several hours before mustering up the courage to take a look around. When they finally emerged from the bathroom, they were shocked at the devastation. “We were stunned. All the trees were gone. St. John is a forest, and you could see the entire island because no leaves remained on the trees.” Helen explains that Irma had sucked off the entire office of the house, the interior windows and doors were gone, and as far as the eye could see the land was littered with downed power lines, debris, downed trees, and building materials. “It was apocalyptic. I’ve used that word a lot since then, but it is the only way to describe it.” Because all the power and cell phone service was down on the island, the Faiths didn’t want to venture far. It was about 5pm so they decided to wait until the next day to assess the damage on their own property.

Thursday, September 7th
The next morning, John and Helen walked to their property and were shocked to see that not a single bit was damaged. Besides four feet of gutter missing, the entire cottage and construction site was intact. “We even had leaves on the trees,” Helen says. “It was truly a miracle. It was either prayer or the fact that we kept our structure air-tight; I’m not sure but it was a small miracle. Our neighbor’s house was strewn down the hillside —their whole lives just tossed down the hill.” 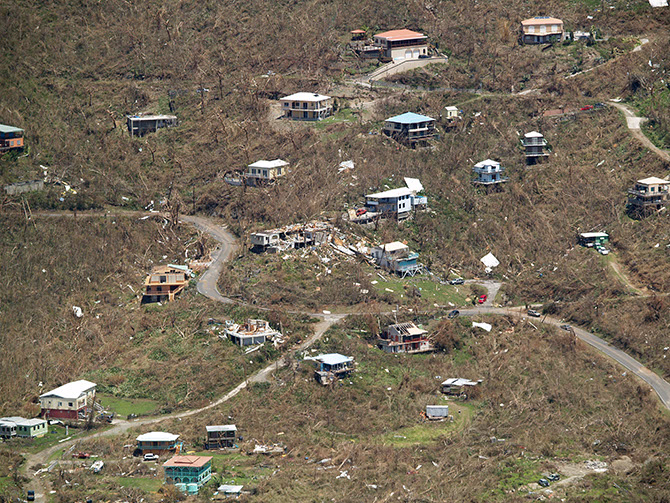 The Aftermath
For a week John and Helen helped their friends and neighbors dig themselves out of Irma’s wrath. It took three days to clear the road, and because of the absence of trees, birds had no place to perch. “Hummingbirds were trying to drink from taillights. I had to put out buckets of sugar water for the birds to survive.”
Since the island had no cell phone service, Helen explains that the aftermath of being cut off from communication was worse than surviving the storm itself.
Soon, they received word that the fire station had a satellite phone that locals could use in the morning. Helen got up bright and early, packed her backpack full of waters, and hiked to the station. She thought she was getting there early to stake her place in line, but she was number 69 out of 300 hoping to reach loved ones that day. She waited six hours to make her one-minute phone call. “It is a lot of pressure, who to call. I wanted to let my dad know I was OK, but I thought I’d get too emotional, and I only had one minute. So, I called my very military-esque neighbor in Indiana. I knew he’d take down the facts and follow through with anything I needed him to do. I had him call our families and post on Facebook that we were OK.” 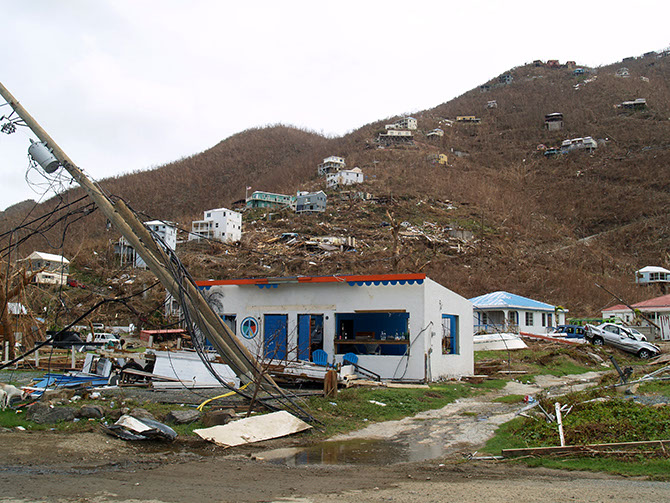 Days after the hurricane, Helen was experiencing signs of PTSD. Every time there was a mild noise, she would jump, and her nerves were shot. She and John decided she needed to evacuate, but John felt he could stay and provide the island with more help (he had a generator and a battery-powered chainsaw).
“I felt so lucky to be alive,” Helen says “We didn’t have jobs or families to run to. And, the look in everyone’s eyes…we were like zombies in backpacks, filling up water jugs and hugging each other among downed power lines and trees. There was a real sense of desperation and everyone had a different story — their boats or homes were destroyed, they hadn’t been able to reach anyone — it was too much for me. Then, we learned that Hurricane Jose was headed our way… When I got the call about the ferry to Puerto Rico, I felt like I had won the lottery.” 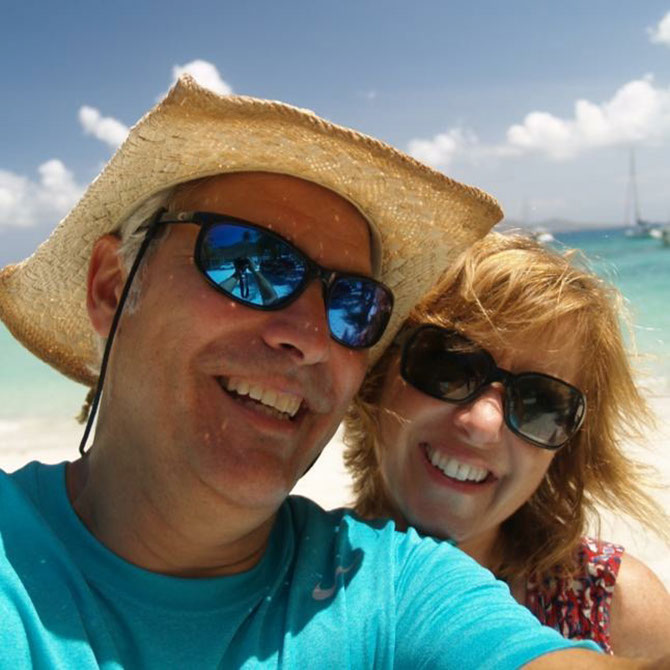 Evacuation
Helen was able to evacuate to Puerto Rico via a ferry days before Hurricane Maria hit. She immediately took a hot shower at a hotel and began working to get back to Indiana. Since Maria was on its way, flights were booked up, but she was able to make it home. There were only two weeks, to the day, between Irma and Maria.

To those who desire to assist these desperate islands, Helen recommends to continue to visit these places. “The economies of most of these islands exist on tourism. Tourism is the only income most of these islanders have. They need you to come back. They’ll never be able to rebuild if you don’t.”