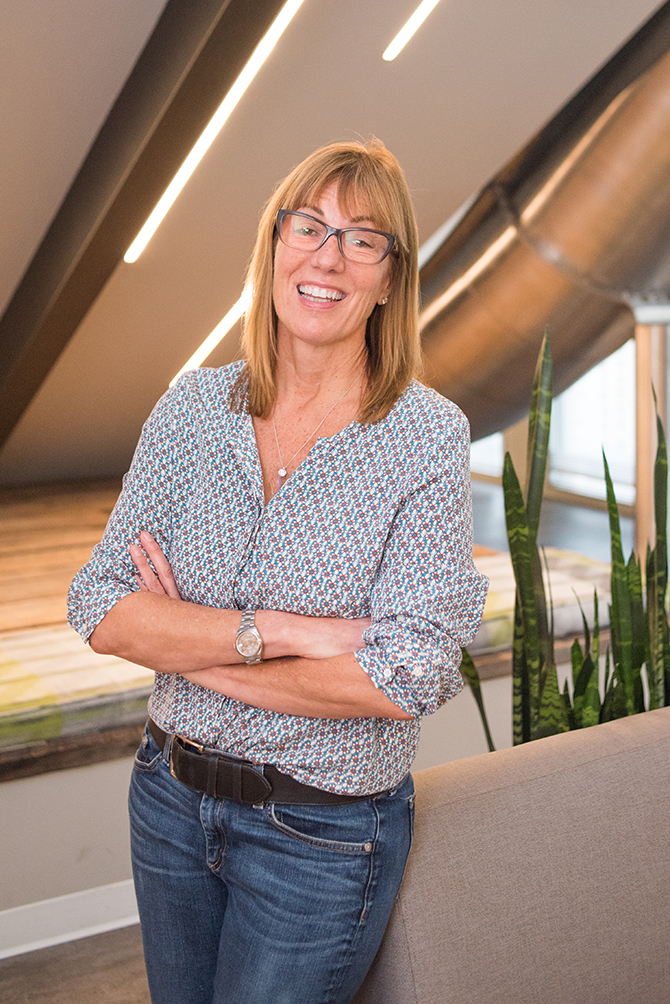 Toni Clem, president of Scoppechio, an award-winning advertising agency in Louisville, didn’t always know that she wanted a career in advertising. A graduate of Ohio State University with a degree in teaching, Toni found her vocation by telling her boss she was bored. “In some cases, that might get you fired,” Toni says, “but in my case, he put me in charge of marketing.”

A Career That Fit
That position led to another one at one of the larger ad agencies in Lexington, where Toni later became the vice president of media. It was then that a chance encounter with a woman who would become an icon in the Louisville advertising industry changed her path.

“I thought I knew what trajectory my career would take,” Toni says. “My goal was that if I stayed in advertising, I planned to go to Chicago or New York and make my way back to my hometown of Columbus, Ohio,” she says.

But when her Lexington company competed against what was then Creative Alliance for a client pitch, Toni’s career path veered in a new direction. “This was right when they were coming on full bore and everyone was talking about this blond bombshell running an agency in Louisville,” Toni says. That “blond bombshell” turned out to be Debbie Scoppechio, a key figure in Louisville’s advertising community for more than three decades.

Toni says she loved Debbie immediately when they met, and four months later, Toni moved to Louisville to take the position of senior vice president of media for Creative Alliance. Her early journey at Creative Alliance in the 1990s was intense. “There was no down time, it was 24-7, I was always on, always had to be ready, on point, and focused.” But Toni says that pace complemented her work style. “I am certainly a Type A personality. I’m never comfortable doing one thing for a long period of time. I always want to be moving forward, and I knew I would have to make sacrifices to be in the position I eventually wanted to be in,” Toni says.

Exploring New Avenues
After 10 years at the agency, Toni was hired by a client and worked on the corporate side of the business, and not long after launched her own consultancy business, Tonic Marketing, in 2000. Opening her own business wasn’t something Toni had planned on.
“I don’t know that I necessarily wanted to do a consultancy, but I fell in love with it,” she says. “I liked the challenge of answering questions and solving clients’ problems and also diving deeper into other disciplines. I believe with a little bit of luck, a little bit of talent, and a lot of faith you can do some really great things.” Toni added that it was at that point in her career she realized “the next time I did anything at all, it would be to have a seat at the table.”

Toni was invited to that table in 2006, and returned to the agency, now called Scoppechio, as president, a position she still holds 12 years later.

She says the role gives her a chance to make a difference in people’s lives. “In advertising, you work really, really hard, and I wanted to make sure those employees that were working hard reaped the benefits of that. I wanted to be able to change lives, to be in a situation where I could help with salaries or career path or personal growth.”

The executive says one challenge of her role is to stay ahead of the rapid changes in the industry. “It’s not just a little bit; it’s staying 20 paces ahead of any trends or changes about to happen.” Toni gave an example of how change happens. “We recommended a client use digital, right when it was coming out 18 years ago. They said it was the stupidest idea they ever heard, but we urged them to at least test it. This company still exists now, and their budget is almost 90 percent digital.”

Learning from the Master
Another critical component of success in the advertising world is tenacity, a trait Toni says was one of the many things she learned from her friend and mentor Debbie Scoppechio, who passed away in 2016. “It was that doggedness; she never gave up, not once — not professionally and not personally. I certainly hope that becomes part of my DNA. Part of the reason I am where I am today is because we were strong together. I watched her and learned. I’m my own person, and she let me be that. It’s not that we didn’t go back and forth. We did, but that’s what strong women do, right?” she says.

Toni says Debbie’s legacy in the advertising industry was huge as a woman CEO who had to break through some glass ceilings. “She pushed forward past the naysayers. If there was a man in the room, she was equal to him, and she learned from him. She said to embrace it. Embrace the things that make men strong, and the things that make women strong and put them together.”