Letter from the Publisher: Sometimes You Have to Show Up in Spite of Your Fears and Trust the Process

Letter from the Publisher: Sometimes You Have to Show Up in Spite of Your Fears and Trust the Process 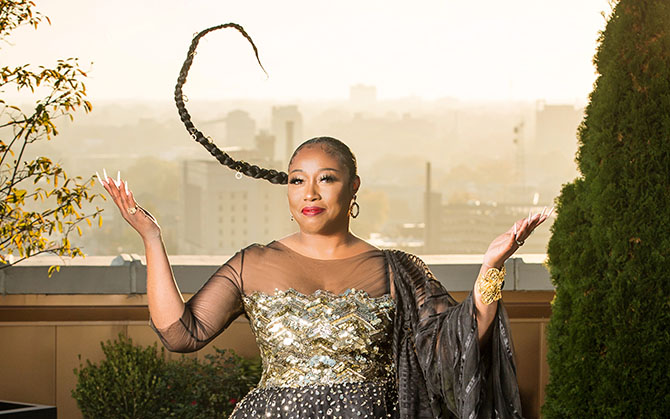 The new Todays Woman is not just about sisterhood, but also about elevating, empowering, inspiring and challenging women to see our sisters in ways we never have before. We will accomplish this by seeing all of our sisters. No exclusions. No exceptions. No excuses.

And speaking of excuses, l must share how much the hater in my head who we’ll nickname “HIMH” pronounced “him” (sorry fellas!), came up with way too many excuses for why I should not be on this cover.

• You’ve gained like a gazillion pounds and will look ridiculous in every outfit chosen for you.

• You have corn rolls on top of a slicked-back pony tail. Your face will look chubby and your photographer won’t be able to help you.

• Girl, press on nails as a substitute for getting your nails done at the salon is tacky.

• You’ll never be prepared for a 6am shoot after just returning from travel the day before.

• Why not use the group shot of the team to be on the cover instead?

HIMH had a lot to say but I’m glad I chose not to listen! Yes, I’ve gained some weight. Yes, I had a slicked-back pony tail with last-minute corn rolls pinned on top. Yes, after no luck finding a nail tech to take on a new client with a request for super-long nails, Amazon came to the rescue! Yes, I just spent the previous few days in Colorado with my team planning for 2022 and enjoying some of the best food Boulder had to offer and- yes, I’m no model, but just because something is true doesn’t mean it’s right to give in to your fear. I was so afraid that I did not want to view the photos of the cover shoot and cringed when the email from our photographer landed in my inbox. I was certain I’d drive my team mad by asking for the most unrealistic things from an editing perspective.

While all of the yeses I feared were true, it was also true that despite the weight gain and despite the fact that I had never tried on the custom dress that was intended for someone else, it fit like it was made for me. Why did I want to hide because of a few extra pounds? And while I was not able to get into the nail salon as I hoped two days before, even with the crazy supply chain issues happening globally, my super-long press on nails arrived in under 24 hours just in time for the shoot. Why did I think press-on nails were tacky? There was a time in my life when I couldn’t afford to get my nails professionally done. There was nothing tacky about press-on nails then and nothing tacky about them now. The two hair dressers on the shoot had an aha moment to improve the slicked-back pony tail in the nick of time just before the end of the shoot. I felt like a queen. I am no model, but as I stare at the radiant woman on the cover of this issue, I am proud to say that I’d follow her anywhere.

So here we are sisters launching into our next chapter, seeing our sisters in ways we never have before, helping each of us to shed our fears and launch — even if the fears are legitimate! Yes, our team shot, which highlights our diversity is cover worthy, but I’m celebrating the team of amazing sisters I’ve surrounded myself with who SAW me. They drowned out the HIMH when they pushed me out of hiding and magnified the voice in my head — helping embrace radiance — we’ll nickname this voice “HER.” That’s what we do when we have each other’s backs, we drown out the haters and show each other how to embrace what makes us unique. I am blessed with so many new sisters that I’m truly beginning to lose count. To my team, thank you for proving me wrong and returning back the love I give by using my platform designed to highlight others as a way to give me a much-needed nod and let me know — #weseeyousis #todayssisterhood.

P.S. Don’t forget to RSVP for our free anniversary relaunch event on December 12!