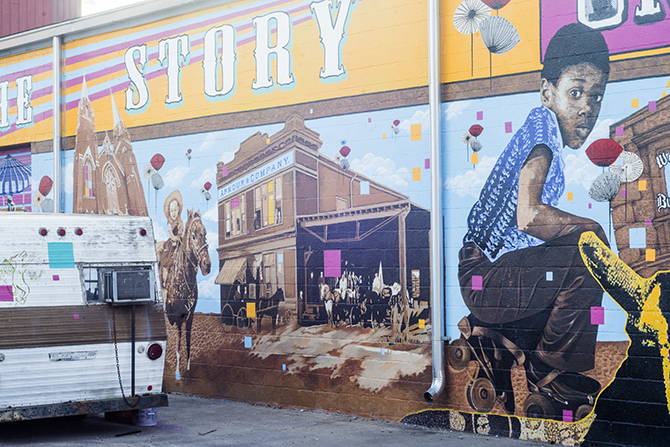 One drive through Butchertown will remind you how it earned its name. There is the unmistakable odor, for one, and the endless flux of steel-toe booted men traversing crosswalks to the pork processing plant, for another.

But look a little closer.

There’s a new element to this tapestry of industry. Perched outside the plant on Story Avenue, in a tiny vintage camper, sits an artist. Armed with photographs, projectors, some paint, brushes, and a few very tall ladders, Tara Remington (known to her friends as Remi) works to tell The Story on Story: a giant mural in the heart of the JBS Swift meatpacking plant.

The mural tells the story of Butchertown. Beginning with the flood of 1937, the mural images start in black and white and increasingly become more whimsical as they progress through history. Along two facades, you will see images of Beargrass Creek (the artist’s nod to environmentalism) and historical images of Butchertown: Swift’s original slaughterhouse, an image of a carousel from a bygone era, St. Joseph Children’s Home, livestock, and a 12-foot-tall African American boy reflecting the neighborhood’s diversity. As the mural nears the corner, the colors become more vibrant and the themes shift to images of contemporary Butchertown. 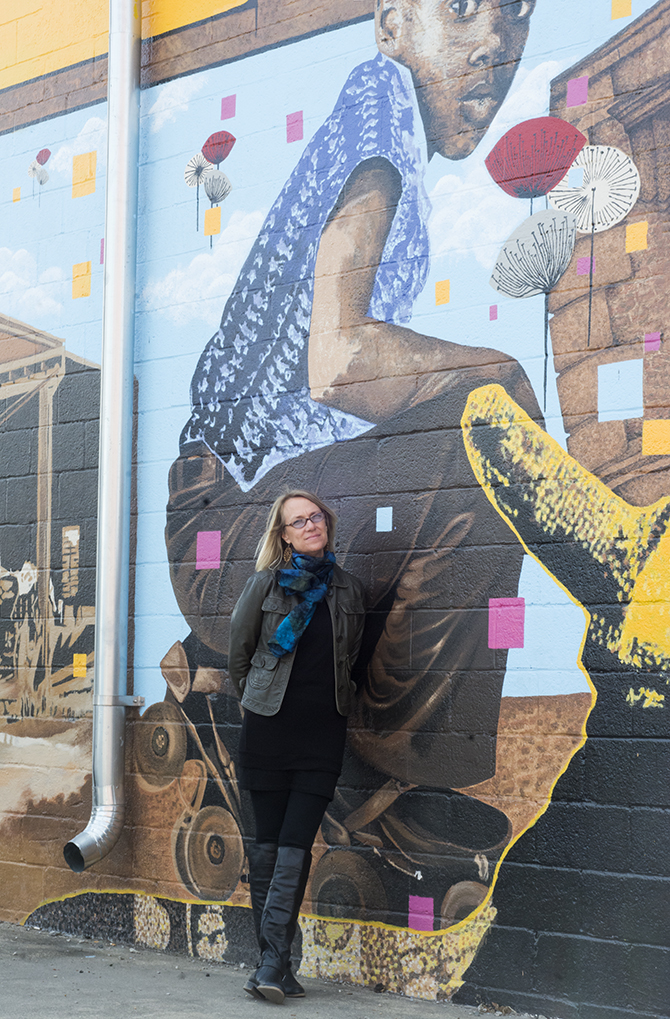 Remi, a mixed-media artist for more than 30 years, has been working on the mural “The Story on Story” with her partner Aron Conaway since June and hopes to be finished by Thanksgiving. “This project has consumed my life for more than two years,” Remi explains. Between negotiations with Swift and designing the mural with her partner, which was inspired by photographs from “Images of America: Louisville’s Butchertown,” the project has been a labor of love. “It is physically grueling; three hours of painting is about all I can do. We project the photos at night and paint in the day, so the project literally takes all damn day. I’ve broken my glasses and my pinky,” she says with a laugh, “but, I love pioneering things.”

This muralist also works with 2D and 3D materials such as wood, plaster, and printmaking; is a self-proclaimed “research nerd” who loves the science behind her various artistic mediums; is working to open her new studio on East Main; teaches art at Montessori of Louisville and at the Volunteers of America shelter through the Arts in Healing Program; is a part-time caregiver for the elderly; and a full-time human rights advocate. Remi’s work with women and children at the shelter is helping to inspire her next piece, a project that will work to create a dialogue of compassion for the homeless population.

“Above all, I am most passionate about public art, that is, art for the people. But it doesn’t always pay the bills. I’ve made it work over the years,” explains the single mother of two college-aged girls. “I always tried to follow my dreams of being an artist in the midst of being a single mom. It’s good for the soul and the heart.”

What She’s Watching
Remi doesn’t have much time to watch TV, but she recently slowed down enough to stumble upon Netflix’s Chef’s Table and fell in love.

“I don’t watch much TV, but I stay very connected to social media. I read and watch a lot of what is on social media and try to stay connected as an artist.”

What She’s Listening to
At the time of the interview, before the election and after the reveal of Donald Trump’s hot mic scandal, Remi said she mostly listens to the news centered around the election. “As a woman, I’ve been exhausted by the news, but feel it’s important to be a model for other women — to be part of the march that we’re not up for grabs.”

She also listens to Zero 7, a British duo, and the Indie station on Pandora when she paints to keep her motivated and calm.