One of Erica Lee Williams’s Obsessions

One of Erica Lee Williams’s Obsessions 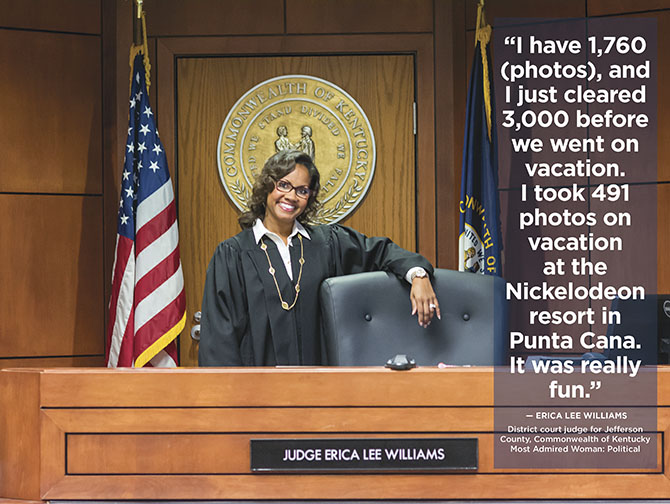 From age 7 when she announced she was going to be ‘a tourney’ when she grew up, Erica Lee Williams never had a Plan B.She graduated from the University of Kentucky College of Law in 2002. In 2009 she was appointed district court judge and then successfully ran for the seat twice and is on next year’s ballot. Away from the courtroom, she enjoys relaxing with her husband Jason Williams and 5-year-old daughter Jacqueline. Her challenge that doesn’t involve a gavel? Getting a garden to grow. Photos by Melissa Donald.


What types of cases do you see in your courtroom?
Both civil and criminal. Misdemeanors, felonies, probate, disability, juvenile, and mental inquest hearings. I am one of 17 District Court Judges.

How did you get here?
In 2009, I was a lawyer at Dinsmore & Shohl working in labor and employment law, worker’s compensation, and general litigation. I was appointed by Governor Beshear to an open seat on the bench. I ran for the seat in 2010, in 2014, and I’m on the 2018 ballot.

When did you know you wanted to be an attorney?
I was 7. I was in a pageant and was asked, ‘What do you want to be?’ I said I wanted to be a tourney.’ The emcee said, ‘Oh, you want to be an attorney’ and I kept saying ‘no, I want to be a tourney.’ Afterwards my parents told me, ‘First thing you’re going to have to do is learn how to say it.’ I don’t really know where that came from. I didn’t know any attorneys, and there were none in my family.

I never had a Plan B. College was an annoyance for me because it was keeping me from law school. But I had to major in something so I got a degree in corporate and organizational communication.

That early assertion has worked out for you.
Yes. I stuck with it and never looked back. I enjoy the approach of thinking two steps ahead. I like the strategy of law and helping people. People are my energy. As I’ve become older I know that I like to advocate.

How was making the change from attorney to judge?
It was a big transition. I see hundreds of cases, and I develop a relationship with some of the people that I have sent away. I had one young woman before me, and we worked on a plan for her. She has a criminal history but went on to college and is now working for a large corporation. She listed me as her reference.

Hard lessons?
My first campaign. I didn’t know anything about what to do. It was a hard-fought election. I won by 600 votes. Jefferson County is huge, and I had to campaign the whole county. I was the new kid on the block, and we learned so much. The second time was easier than the first time.

How do you relax?
Hanging out with family is my happy place. And, going on vacations. We play a lot as a family.

On your mind?
The future for my daughter because of social media — people saying and doing anything and hiding behind a screen name. What is that going to do to us as a society? We see so many things, so many tragedies on the news and on the internet that we’ve become desensitized and disengaged. It used to be there was a school shooting; now it’s another school shooting. The good things don’t get the attention that they should.

Can’t get the knack of?
Being a good gardener. I’ll try every year, but I can’t get anything to grow. I want beautiful flowers and vegetables, and I keep trying, but they don’t come for me.

Listens to in the car?
It depends. If I’m taking Jacqueline to or from school we have Kidz Bop and Radio Disney. If I’m alone I’ll listen to country, R&B, or classical. Jason says getting into my car, he never knows what will be playing. It’s like the Russian roulette of music.

I have too many?
Photos on my phone right now, I have 1,760, and I just cleared 3,000 before we went on vacation. I took 491 photos on vacation. We went to the Nickelodeon resort in Punta Cana. It was really fun.

Words to live by?
‘Why fit in when you were born to stand out?’ That’s from Dr. Seuss.

Parting words:
Judges are painted as robots, but we’re humans interacting with other humans. Everyone is shocked when a judge shows compassion. It makes the news. Here in Jefferson County, we care. I encourage people to come and sit in district court. What you see will amaze you.