Modern Family: Back in the Saddle

Modern Family: Back in the Saddle 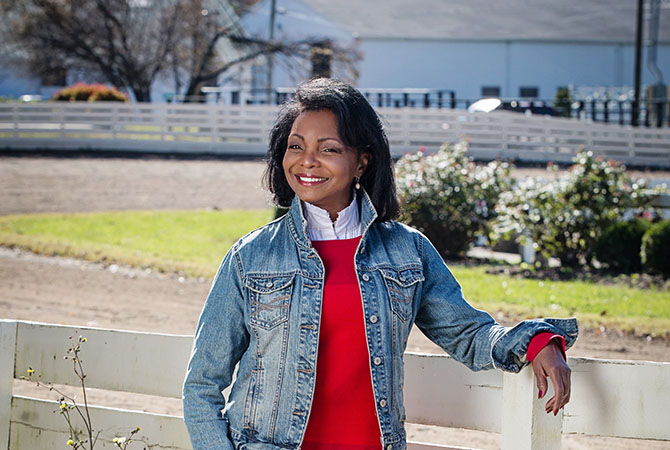 While encouraging her boys to take up polo, busy mom of three/anchorwoman Jean West decided to saddle up herself. Here, in her debut column, she shares the value of getting off the sidelines as a parent.

Introducing our new monthly columnist writing about family issues, Jean West! Jean is an Emmy-award-winning journalist and former WHAS and WAVE anchor and is president of The Rotary Club of Louisville. Read along as Jean tackles important issues in the family and shares about her own experiences raising three boys, who are now grown and happily settled in New York, Florida, and Virginia.

It all began at a dinner party we hosted to welcome our new news director Nick Simonette and his wife Suzanne. During a conversation about horse racing, Suzanne’s cousin, who also attended the party, mentioned that she was part of a local polo league. The trainer and captain were trying to start a youth league.

Immediately, my mom antenna went up. I loved the idea of getting our three boys involved in a sport that has deep, historical ties to their hometown. It also enabled them to acquire a skill that would benefit them for life.

They were equally excited, so I quickly signed them up for lessons. One week later, we went to meet the team at the polo fields off Rose Island Road. What glory! We saw a majestic site of beautiful polo ponies, trainers and riders in polo regalia and a sweeping field with stables in the distance.

My sons took to it right away. Their teachings began with learning to ride, cantor, gallop and stay on the horse. But there’s more to polo than riding a horse. They had to learn strategy lessons with a big chalk board diagramming offense and defense positions. Finally, they had to master the skill of guiding their horse to hold those positions for an entire chukka — the seven-minute periods that make up a match.

Getting into the game of polo is a process that requires discipline and patience. As I watched my boys rise to the challenge, I discovered we had found a sport that would help them build character, confidence and a work ethic. Then I thought to myself, “I might as well get up on a horse and ride too!”

And so, I did. It was daunting at first. I was almost 40 years old — more than twice the age of most first-time riders. I’d done trail-riding in parks, but this was nothing like that. These magnificent beasts were fast and powerful. My horse, Manolo, was a sweet filly, who knew how to play the game, but always wanted to go back into the stall. Much of my time was spent learning to direct her back to the field. No one was going to come lead her out of her shady stable. I had to gain the confidence to lead in the saddle.

Manolo threw me off once, but I got back on the horse. Figuratively, it was one of the life lessons my sons and I learned from participating in polo.

Learning with them brought us closer and created a new way for us to connect with each other. Owning and riding a horse was a childhood dream of mine, but it was out of reach. My experience with riding later in life showed them it is never too late to learn something new and make your dreams come true.

Many years later, when the boys were teenagers, they accompanied their father on a business trip to Egypt. They planned to see the pyramids, but thought they would miss their chance because the tourist buses were full — until they spotted tour guides on horses. My sons didn’t hesitate to ride on horseback to see the pyramids.

It was another magical family moment that would not have happened if I had not trusted my mom instincts and galloped into the unknown.