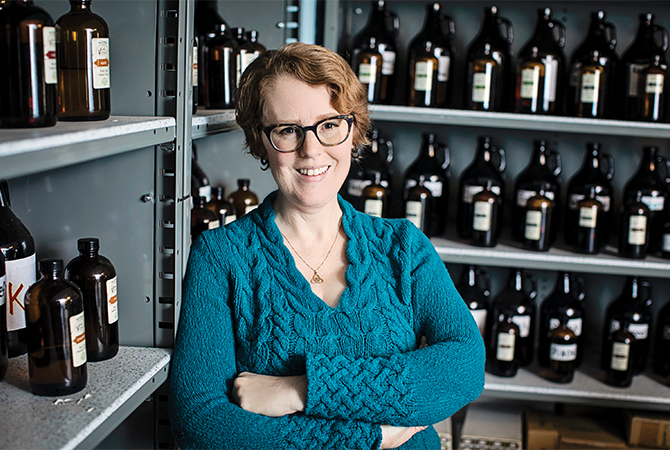 Making Dollars Out of Scents: Angie Andriot’s interest in making perfume became the formula for launching a successful business.

When Angie Andriot started making her own perfume at home more than 10 years ago, she never expected her hobby to turn into a full-fledged small business that offers services all around Kentuckiana and ships products across the country. “It really started with me experimenting with making my own perfume,” she explains.

Eventually, Angie started selling some of her own creations. In the vibrant local shopping community of downtown New Albany, Angie found it easy to find stores that would carry her custom creations.

“But even then,” she recalls, “it was still a hobby. I wasn’t making a ton of them or selling a ton of them.” About a year into it, however, Angie’s venture started to grow. She began throwing perfume-making home parties, and before she knew it, she had more supplies than she could manage. Not only did Angie have an abundance of goods at her disposal, but she also realized that she had amassed a whole lot of knowledge about ingredients, suppliers, and perfuming in general.

“As an industry, it can be kind of difficult to get into,” Angie says. “The materials can get very scientific very fast, with aromas, chemicals, isolates, molecules, and ingredients that aren’t liquid to start with.” She considered the supplies she had on hand and decided to use them to create an easier way for hobbyists to blend their own perfumes at home.

Today, Vetiver Aromatics offers perfume-making kits and bars, as well as standalone ingredients for sale online. The company name, Angie says, came to her in a dream. Vetiver is also one of her favorite scents; she loves its grassy, earthy, rich quality. “And at the time, I was a really huge Harry Potter fan,” she says, “and it sounded slightly like a Harry Potter spell.”

Angie shares that Vetiver offers two ways for interested hobbyists to delve into the world of creating their own scents. Their kits include more concentrated fragrance bases that are blended, which provides more of a traditional perfumer experience. The perfume bars, which have been much more popular, includes single-note perfumes that are easily blended to create new mixtures. 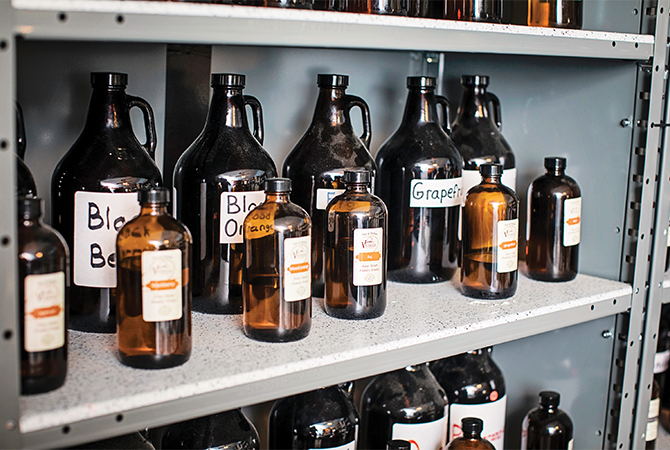 Angie says all of the kits and bars she has can be ordered online and shipped anywhere in the U.S.. She also makes every effort to ensure the products are cruelty-free. She refrains from using any phthalates and avoids purchasing items  from companies who experiment on animals. In fact, all the ingredients are vegan. “We do sell something that’s called musk,” Angie says, “but it’s completely synthetic.”

Local customers can also take advantage of Vetiver’s bartending services. “People who would like to purchase a perfume bar … can have somebody come and bartend for them,” Angie says. “It’s set up just like a bar, but instead of alcohol, it’s fragrances, [and people] can mix their own. You’ll be guided in the experience of mixing your own scent.”

Implementing the perfume bar option was a way for Angie to get back to her creative core. After accepting a position as a research analyst for the Presbyterian Church USA eight years ago, she had to pass most of her Vetiver duties onto a business manager — and the company’s primary focus became selling supplies. Creating new scents and helping others to do so, Angie says, helps her stay in touch with the creative side of the business.

Since perfumery is such a creatively inspired industry, Angie urges newbies to give new scents a try and to not feel intimidated by blending. “Perfumery is part science, but it is a lot of art,” she says. “If you like the scent that you end up with, it’s not wrong — no matter how many of the perfume rules you broke. [If] you like the product, you did not do it wrong.”

After being in the perfume business for more than a decade, Angie does, of course, have a custom-created, preferred scent of her own. The combination of vetiver, oak moss, white musk, bergamot, and a tiny touch of fresh grass is her signature blend. Though the mix remains unnamed, it is Angie’s favorite — and creating each bottle speaks to her creative side.

After all, owning a small business is great, but it’s really the creativity — the mixing, blending, and designing — that Angie loves. “It makes me feel like an alchemist or a magician or something,” she says with a laugh.