After Christine Beshara-Repp’s divorce, she found herself short on funds but full of big dreams. All of a sudden, a life stretched out in front of her. Where she was to steer it, was no one’s decision but her own. But like most transitions, it took time; like most divorces, it was complicated. Christine, 42, and her ex-husband were still friends. For a while after the divorce, they actually shared their home together — a simple, temporary solution to a complex family web. Even after her ex-husband moved from the home they shared, Christine thirsted for more independence. She needed adventure, to be in the driver’s seat after so many years of idling. She needed to know she could do it, all on her own.
And so, a road trip was born.

In June 2016, Christine had taken a road trip to Colorado with a girlfriend, the first trip after her separation. As a wife and mother, she was used to vacationing at a friend’s beach house in Hilton Head; she was used to living the easy, annual week of beach life or Disney resort with her brood. But this trip was full of adventure — she and her friend packed into an old Jeep and headed to the Rocky Mountains, camping along the way. “It was amazing. We lived a dirty, earthy, hippie life for a week. It was the first time in two decades I had seen Colorado. I really wanted my boys to see the terrain, to experience the sense of adventure I had with my friend.”

So, Christine, a middle school teacher, had a plan: She would take the boys on an epic road trip to Colorado. This would be her first attempt at single-mom travel. She worked Saturday school sessions and saved her extra money for the trip, but still, she had a tight budget. “I told the boys that we can only spend $250 a day. No eating out on the road — this was going to be very different than when I was married. We were going to pack a cooler and make sandwiches,” Christine recalls.

At first, the boys balked. “They wanted Wendy’s, but I kept driving the point home about our budget. That first time we pulled over and ate our little lunches by the river, I felt so proud. It was really nice, all of us there together by the river. I had so much enthusiasm about the trip, I think it rubbed off on them.”

Not only was Christine on a shoestring budget, she also could only carve out a week to take her big adventure due to her boys’ busy athletic schedules. “We had one week, June 11-17, to make it from Louisville to Colorado and back. I clocked over 2,000 miles.” In order to make it there, she drove all through the night. Her oldest son, Dominic, had just turned 16, so he wasn’t driving yet, but stayed up all night to keep Christine awake at the wheel. “We talked and bonded through the night,” Christine says.

But it wasn’t all magical mystery tour. “There were moments when I thought hysterically, ‘I’m the only adult here,’” she says with a laugh. She prepped for the road trip by ‘psyching’ herself up and loading up on coffee, but there was no one to hand over the wheel to. Not to mention, she was traveling with 16-, 13-, and 10-year-old brothers — a recipe for road trip mayhem. “I was mentally prepared for fighting in the car, but everyone did great. I bought Josh a fidget spinner and that kept him occupied most of the trip.”

Josh, her youngest son, has autism, speech, and vision impairments, and a cognitive delay. Christine worried that if he got lost, he wouldn’t be able to articulate his way back to camp. “I got him a GPS watch just in case, but nothing held him back,” Christine says. “He handled everything like a champ.”

None of the boys had been campers, but once they made it to their first campsite in Colorado, just outside Rocky Mountain National Park, they proved to be naturals. Christine kept the schedule loose because she wanted buy-in from the boys as to where to go. The crew decided on Estes Park and Aspen, where the film Dumb and Dumber was filmed. The whole trip they chanted, “Where the beer flows like wine!” and retraced the journey of the idiotic duo. They also decided on a horseback riding excursion (Josh’s choice), hiking at the Garden of the Gods (Christine’s pick), and a visit to both the Denver Broncos Stadium and the Olympic training center in Colorado Springs (Dominic’s and Sam’s choice). 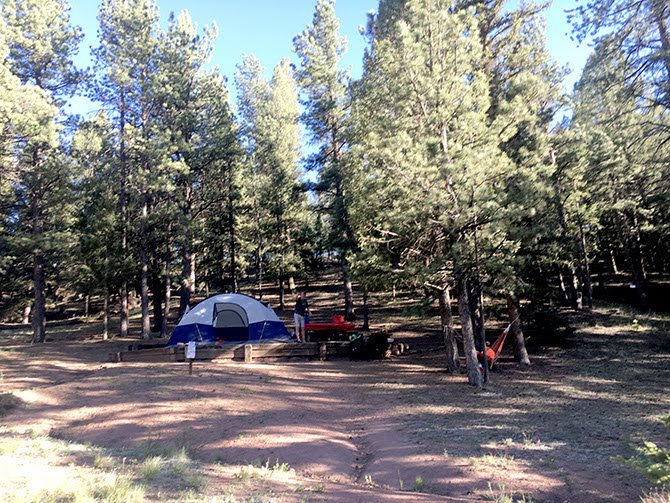 “The trip was not relaxing, but it was a lot of fun and meant so much to me. Not only was it the first big thing I did, start to finish on my own, but I can look back at all the moments of happiness we had together. Everyone was engaged with nature, without it being a chore. I remember one campsite, where I sat back and looked at Dom and Josh swimming in the lake below, laughing and having the best time. Sam [13], who I can never get away from technology, was tying things up in the trees and completely fascinated with all the gadgetry of camping. My campfire dinners were often disasters — I tried to make grilled cheese pressed sandwiches that turned out like charred hockey pucks — and we froze to death some nights, but we had so much fun together.” 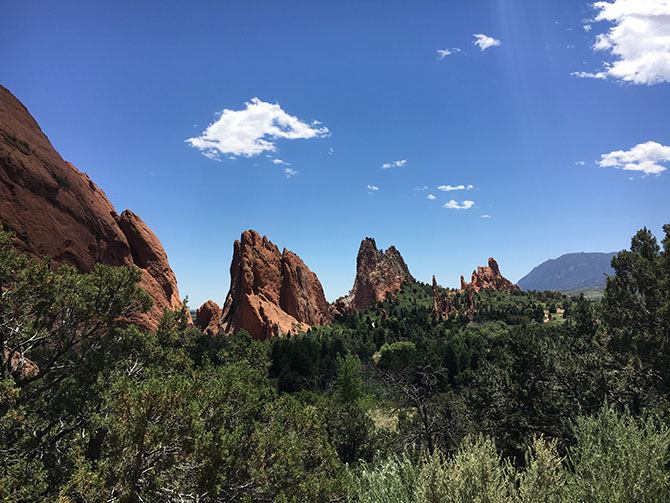 Not to Miss
Christine loved the Eleven Mile Canyon campsite as it was remote and magical. The website describes it as “an unexpected paradise” full of hiking trails and a twisting canyon below.
Although she was pressed for time, Christine wishes she would have stayed two nights in each location to get a better feel for the place and to avoid being rushed.