“I’m not a perfectionist.” And, Why That Helps Jane Termini Be Successful

“I’m not a perfectionist.” And, Why That Helps Jane Termini Be Successful 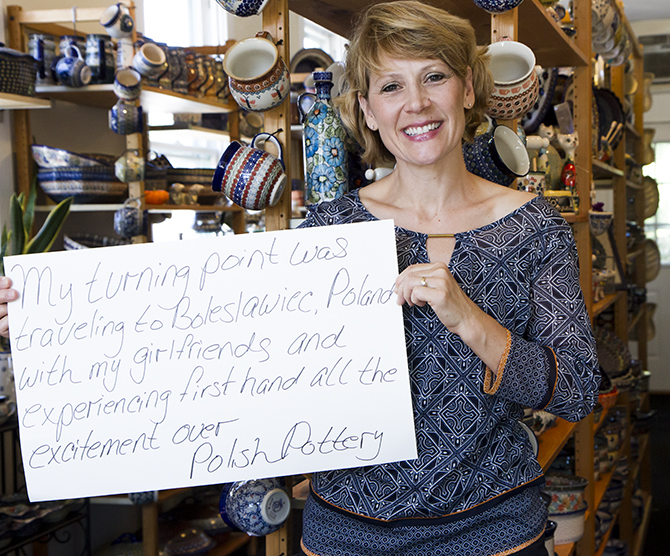 When Jane Termini and her husband Paul were living in Düsseldorf, Germany, in 2002, for his job with GE, she went on a weekend getaway to visit several pottery factories with other members of the American Women’s Club. That ladies-only shopping trip became her Turning Point.

“There is a section of Poland called Bolesławiec, and I was told the pottery factories there were something I just had to see. The first time I went it was a jaw-dropping experience. I was attracted to all the color and shapes of the pottery. The quality is amazing. The clay used in making the stoneware is a natural resource of the area. Every time we would go back we would take fewer people and bigger cars so that we could buy more and more. I couldn’t get enough of it.

“Before we even left Germany, I had it in my mind that I wanted to bring this lovely handmade stoneware back to America and share it with people.”

The family returned home to Louisville in 2005, but Jane’s dream was deferred for a while. She was a stay-at-home mom and had three boys to raise, and her husband was working long hours.

It wasn’t until 2014 that she started selling the Polish pottery online only. Then in November 2015 she opened the bricks and mortar store, Color Palette Polish Pottery, on Main Street in Middletown.

To say that Jane is enthusiastic about the pottery is an understatement.

“The pottery is so easy for me to sell because I love it so much. When the skids that hold my order are delivered it’s like Christmas. I love opening up the boxes and unwrapping all the pieces.

“When people walk in the store and have never seen Polish pottery before they are absolutely taken aback with its beauty. Or, if they have been stationed in or lived in Germany or that area of Europe and are familiar with the pottery, they are so excited to see that it is available here.”

Jane says she didn’t have any previous business experience, but she admits she does have a habit of starting something and seeing it through.

“When my kids were at St. Patrick’s school, I started and ran the chess club. When I lived in Düsseldorf, I served as vice president of the American Women’s Club and was in charge one year of its big gala and silent auction fundraising event.”

What’s her secret to accomplishing what she sets out to do?

“I’m not a perfectionist. I couldn’t move forward or take the next step if I were. I’m more of a 90 percenter. As problems or challenges come up, I just figure I’ll work them out somehow. I don’t have to know how to do everything ahead of time or have the whole plan laid out perfectly for me.”

Although some very kind and well-meaning people have offered ideas and suggestions for the business, Jane is happy going at her own speed. “I feel like it’s moving fast enough for me. I’m enjoying the ride. I have time to figure out what I need to figure out. It’s going well. People are finding me, but it’s not overwhelming. 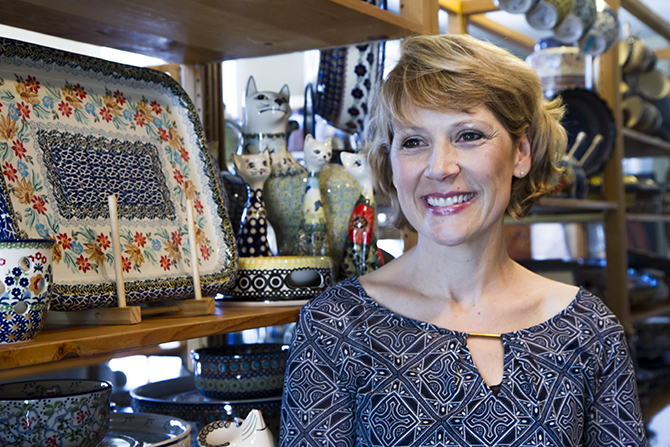 “In my mind, the only failure in life is not trying. I was excited about the Polish pottery and wanted to bring it over here. The timing was perfect.”