I Escaped the Sex Industry — After 35 Years

I Escaped the Sex Industry — After 35 Years

When Mary Frances was 15, her neighbor “Dirty” recruited her into the sex and adult entertainment industry. He bought her ice cream and promised to marry her one day. He did come back but not for marriage. Dirty pulled Mary into the sex trade where she remained for the next 35 years. “It all began with a milkshake,” Mary says. “I was a hungry kid with alcoholic parents. He told me what I wanted to hear, and I followed him.” After surviving decades of abuse and exploitation, Mary escaped the sex trade at the age of 50. Now, seven years later, Mary Frances shares her story in the hopes of shedding light on the growing problem of human trafficking.

Mary tried many times to break away. She sought therapy, counseling, education, and even got a “real” job, but each time she went back. “I hated myself and what I was doing. I felt worthless and couldn’t quite function in society with all those secrets. I didn’t feel right anywhere,” Mary says. She vividly remembers when she began to feel hopeful that things could change for her. “I was living in a shack in someone’s back yard. I stayed beyond my shift in the strip club hoping to earn enough money for some food. I was at the end of my rope. But then the ‘church ladies’ came in,” Mary says. These women were volunteers with Scarlet Hope, a ministry in Louisville offering support to women in the adult entertainment industry. For Mary, Scarlet Hope proved to be the answer she was seeking. “I remember asking them for a prayer. They gave me food; they fed all of us. I decided to trust them and trust in Jesus. I found community and fellowship and began to let go of some of the shame I’d felt for so long,” Mary says.

In her efforts to raise awareness and help others to escape sex work, Mary works to dispel some of the myths around the adult entertainment industry and human trafficking. She speaks about what a difference it would have made if someone would have stepped forward to protect her when she was a teenager, if someone would have noticed she wasn’t going to school. Mary says, “There are red flags, but someone has to see them and do something. I’d like to do my small part to help by educating the public.” Mary discussed some common myths about women in the sex industry, and she offered the insights she’d gained after so many years.

Myth: Women do sex work by choice.
“Young girls don’t choose this life. They are usually introduced by a pimp or a perpetrator. The girls are starved for attention and he does nice things, makes them feel special. They call what we do in sex work a ‘trick,’ but in reality, we’re the ones being tricked.”

Myth: Those women just want to party every night.
“A stripper’s life is anything but a party. When I wasn’t in the club, I couldn’t even listen to music because it rattled me so much. We are continuously groped and insulted.”

Myth: Women just do the work to pay for college.
Mary says that maybe one in 100 women are stripping in order to pay for school, Christmas gifts, or things their kids need. “I’ve never seen anyone thrive from the sex industry. If a pimp or perp isn’t taking the money from them, it’s squandered away. We don’t make the money that people think. I rarely had enough for food or a taxi.”

Myth: Strippers are beautiful, young, and glamourous women.
“I’ve worked with women who are nearly 70, and a girl as young as 12. We come from all walks of life.These women tend to have drinking or drug problems, or someone is pounding on them. Many don’t make it. I feel like a war survivor.” A point of pride that Mary mentioned is that she still has all her teeth; that’s very unusual.

Myth: She can just walk away when she’s tired of it.
“I guess we all tell ourselves we will get out, but you get stuck. It’s a dark secret that you can’t tell anyone. You are numb inside, carrying the shame of what’s become of you. I was once sold to 30 people in one day. You’re no longer the person you once knew and simply can’t see yourself anywhere else.” 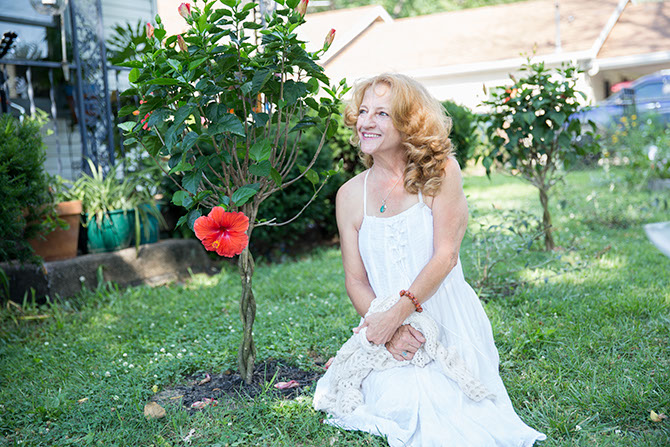 Myths such as these keep human trafficking in the dark, a secret that society barely acknowledges. Too often, people enter the sex industry as a way to survive. They don’t have a place to live, eat, or sleep. “That was my case,” Mary says. “I was looking for someone to take care of me.” Mary suggests society needs to do more for young people who look hungry and anemic, who don’t go to school, and won’t make eye contact. Human trafficking is far more pervasive than imagined. It is wrapped up in domestic violence, alcohol and drug abuse, poverty, depression, and mental illness. “We need educate our society about it,” Mary says.

Mary feels blessed to no longer feel shame. On the day we met, she had worked in her garden, fed the birds, and played with her dog. “I no longer live in the dark. I have a place to stay and the support to handle all that comes,” Mary says. To learn more about Mary’s brave story, you can check out her book A Harlot’s Cry: One Woman’s Thirty-Five Year Journey through the Sex Industry. A book launch party will be August 26, 1-5pm at Hikes Point Christian Church and the book will be available everywhere on August 29.