How Creating Something Beautiful Can Restore the Soul

How Creating Something Beautiful Can Restore the Soul

When Deanne Moore’s husband passed away from cancer in 2009, she cried at the mention of his name. “I was having a hard time,” Deanne says. In the midst of her grief, though, Deanne found a house built in the 1800s and began a journey of restoration.

The house, located on Main Street in Charlestown, Indiana, was up for auction but had no buyers. Deanne’s best friend urged her to check out the home. “I took one look at the house from the back, and I said, ‘I’m going to buy this house,'” Deanne says. “‘I’m going to fix this house up.’” 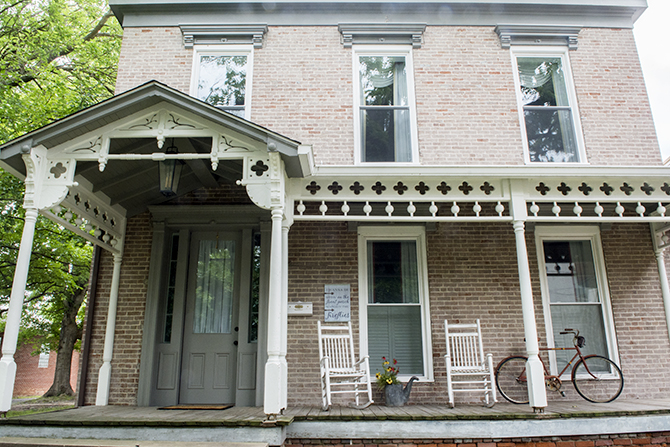 Deanne made an offer, the sellers accepted, and the work began. “No one had lived in it for a few years,” says Deanne, and it was in pretty bad condition. She hired a local remodeler, Willard Nolan, and that’s where her dance with grief took a turn for the better. “I liked the guy right off the bat, and he gave me a ballpark figure for the job. I could live with that,” Deanne says.

Beyond decisions about flooring and cabinetry, paint colors and furnaces, the renovation gave Deanne something more precious. “It gave me something to live for, something to get out of bed for,” Deanne says.

Deanne has long been interested in home renovations. “I’ve been remodeling houses in my mind since I was a kid,” Deanne says. When she played pretend, she swept leaves to designate the walls of her play kitchen and living room. That love of all things home stayed with her into adulthood. Deanne’s favorite network is HGTV, and her favorite show is Fixer Upper with Chip and Joanna Gaines.

When it came to this home built in 1865, Deanne didn’t try to keep much of the original look and feel. She opted to modernize it to suit her tastes. “This isn’t probably what a decorator would do, but it’s what I like,” she says. Deanne did keep a showstopper of a staircase, which she had sanded down to its original finish, an exposed brick wall upstairs, and a fireplace in the bedroom on the main floor.

“That staircase is one of the reasons I wanted this house,” Deanne says. “And that brick wall is cool.” She added three bathrooms (the home didn’t have any indoor bathrooms) as well as unit heaters and air conditioners to keep the home cozy. She tore out a side porch, sealed up a cellar, and created an open concept kitchen.

Though Deanne didn’t start this project with a public space in mind, it has had public gatherings and will evolve into more. With its facelift and additions, the house, now known as The Inn on Main, has been used for lots of different gatherings, including Christmas and Thanksgiving parties, a honeymoon getaway, wedding showers, and an art gallery for local artist Dixie Busby. But Deanne’s plans don’t stop there. Her daughter, Rebecca Putman, is moving to Charlestown from Lexington, Kentucky, and plans to manage the Inn.

Rebecca will offer piano lessons in the home and hopefully attract more guests. “I don’t want to get rich, I just want to make enough money to pay the water and utilities,” says Deanne, who is happy her daughter and son-in-law are moving home. “My husband always wanted the kids to come home, now I have to go to the cemetery to tell him they are,” says Deanne, whose other children also now reside in Charlestown.

Renovating this home was very therapeutic for Deanne. “My husband would love to see this,” she says. “Living beautifully means resurrecting something. It gave me a reason to get up in the morning and kept my mind off his death. It helped tremendously.”