Going Inside the West End School

Going Inside the West End School 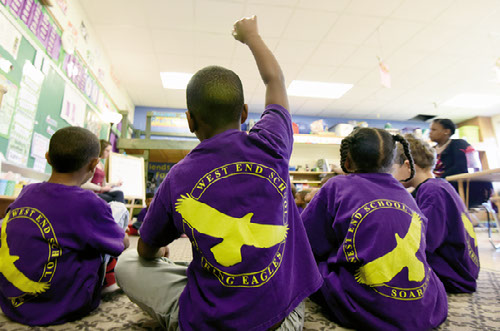 When I toured West End School, located at 36th and Virginia Avenue, it had been Debbie Blair’s third tour that day. Despite the typical end-of-the-school-year-chaos — boxes of binders ready for storage, loads of laundry needing a wash, and hundreds of partial paint cans poised in military precise formations waiting to be purged — and even despite her retirement being only six weeks away, Debbie’s enthusiasm did not wane. This space, a gift from the community, has been a labor of love, and her literal home, since 2005 when her husband Robert Blair, the former headmaster of Kentucky Country Day, made his big idea for a free boarding school for at-risk middle school boys come to fruition.

Spanning 4.5 acres of Louisville’s Chickasaw neighborhood, Debbie and Robert took the historical site of the Virginia Avenue Colored School, built in 1923 during segregation, and made a small miracle. The site (which most recently housed JCPS’s Carter Elementary) is now home to a projected 100 elementary-aged boys in the lower school, 25 boarding middle school boys, a state-of-the-art athletic center donated by Louisville’s own [former professional basketball player] Darrell Griffith, and a maker’s space complete with 3-D printers, table saws, and work tables, donated through the UofL Speed School.

“This school has been blessed,” Debbie says in the foyer, propped up against a grand piano, relishing in the generosity that made their humble beginnings a success. “It is so exciting to see people come and give. The place runs on volunteers. Thousands of volunteers give hours, teachers stay for years without pay, and the library was made through donations and volunteers who build shelves. [The Louisville Orchestra Music Director] Teddy Abrams came to play for a half an hour when this piano was donated to us from the Scottish Light Orchestra.”

They began with three students and one teacher, housed in a building on 17th and Chestnut streets. “We took all comers, whoever showed up at first. We had no idea…” Debbie laughs. Shortly after the school’s inception, the foundation on the boarding house collapsed. Debbie and Robert moved the students to their home in the East End and shuttled them back and forth to school each day. These humble beginnings are now only a memory.

The Blairs have since sold their East End home and live at the school among their students, five teachers, and a live-in counselor. The boarding school, complete with beautiful double-paned windows, oriental rugs in each room, and the Blair’s dog, is a whole 10-second walk to the classrooms. “No one has an excuse for being late!” Debbie says.

At West End School, boys are expected to live by the motto, coined by French author Antoine de Saint-Exupery, “To be a man is to be responsible.” This philosophy manifests itself in a highly-structured day focused around academics, athletics, and character-building. Students are expected to respect authority, perform at or above grade level, take core academic classes as well as foreign language, travel and study in the summer, and participate in all three sports teams: track, soccer, and basketball. Middle school boys board Sunday-Thursday and follow the schedule below:

On Fridays, students leave the school to go home and return on Sunday night for three hours of study hall in order to prepare for the next school day. “We teach kids that every action has a consequence, positive or negative. We give extra dessert for rewards and keep a record of when boys go above and beyond on our responsibility bulletin board. These boys and their families give up a lot to be here.

There is no TV (except for the Super Bowl and NCAA championship game), no video games or cell phones; they have to give up their friends and typical middle school stuff. They have to cut their hair. The mothers are heroes to turn over their sons and trust us each week. She trusts us to better him, to take care of him, to help give him a future. But our boys get full scholarships to KCD, to Collegiate, to all the top schools.”

Although Robert — who Debbie says is the brains behind the outfit and who painstakingly worked to build his vision — is retiring this summer, there are still several projects in the works. The former “gym” that had no working light and a leaking roof will now become an auditorium. The former basketball court, the only one in the city that had to be shoveled after a snow, is now becoming a courtyard with an ampitheater. There are plans for an outdoor science classroom, space for al fresco dining, and an auditorium lobby complete with one women’s restroom.

Who can attend?
Boys must come from at-risk environments: homelessness, incarcerated parents, poverty, and single-parent homes, for example.

The Blairs believe that parent buy-in is integral in the student’s success. Each day parents must enter the building to drop off or pick up the kids from lower school. At this time, parents exchange lunch boxes and touch base about anything that might be affecting the child from the night before. This constant communication is a required element of admission.

Each summer, middle school candidates must attend summer school to gauge whether or not they are a good fit for the boarding school. “We are more interested in their character than their grades. We have rules — living together requires rules — and we are looking for boys who can respect authority and possess a desire to better themselves,” Debbie says. “These young men are getting a $60,000 scholarship, so they need to be a good fit.”