Freezing The Warmth of a Winter Wonderland

Freezing The Warmth of a Winter Wonderland 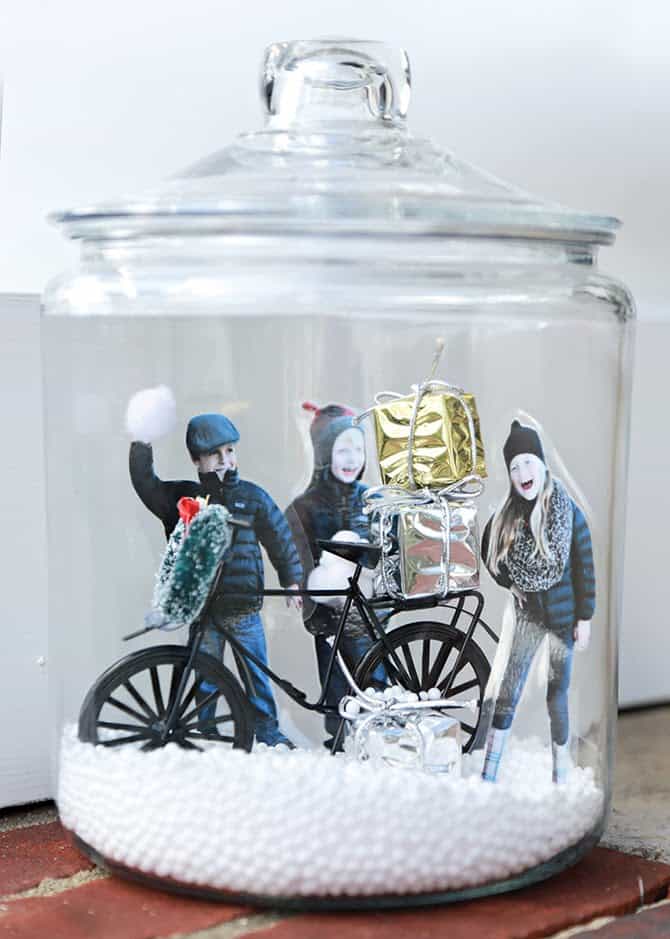 One particular December several years ago, I was watching through the front window as my children played in the snow. Their squeals of delight were muffled behind the panes of glass, but their joy was palpable. Their tiny red noses, their little bodies thick with layers, and the snowflakes falling from the sky like powdered sugar made my breath catch in my throat. A real-life snow globe scene was unfolding in front of me. As I pressed my face to the window to take it all in, an idea was born. I would recreate this scene and preserve it so that the moment would never be lost. After gathering a few supplies, I went to work creating a snowy setting using a photo of each child and copious amounts of faux snow. I was delighted with the outcome and the kids were mightily impressed to see themselves in the middle of a winter wonderland encased in a spaghetti sauce jar.

The following winter, as I pulled out boxes of decorations, I unpacked my jars and found that I loved them even more. The kids had grown and changed since then, but just as I had hoped, a moment of their childhood sat unchanged beneath the glass. I decided then and there to make it a yearly tradition and to share the idea with my closest mom friends.

I’ve been hosting a Snow Globe Soiree ever since. Friends show up at my door on the designated evening with their jars and other tiny accouterments. We gather in the kitchen to drink wine, munch on appetizers, and assemble our wintery scenes. Snow and accessories are swapped and shared, and we ooh and ahh at the cuteness of our children. Everyone steps back out into the cold night carrying with them a snow globe and a moment that they’ll forever cherish. 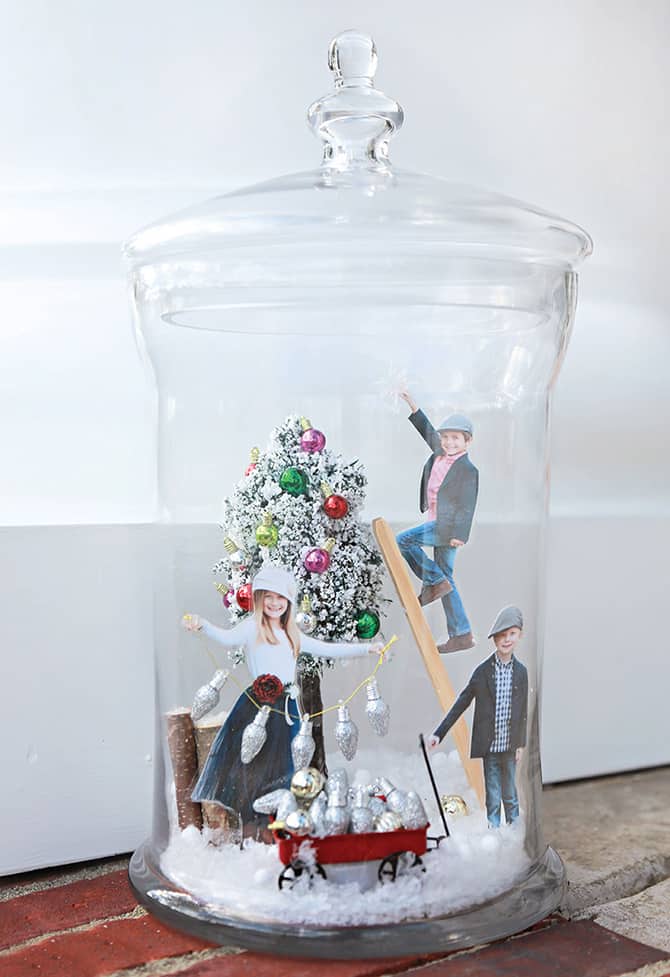 Interested in creating one for yourself or making a girls’ night of it?

1. Think about what you’d like your scene to look like and then snap a full body photo of each child. I usually have my children wear their coats and hats so that they look the part. When I first started making these, I just had each child pose as if they were standing out in the snow. Over the years, as the idea has evolved, I work hard to pose them for the scene I’m hoping to create. For instance, if I want the end result to be the three of them having a snowball fight, I might pose one child with his hand up as if he is throwing a baseball. The next child could be photographed ducking down or with hands positioned to catch the incoming snowball. The third child might be laughing or pointing or even positioned as if to hold a bucket of snowballs. The possibilities are endless and can be as simple or as detailed as you prefer.

2. Print the photos. A 4×6 size print usually works well. Closely cut the body out making sure to stay right on the lines of the clothing. No background should be included at all. The exception to this is leaving a small tab under the shoes so that you have something to glue down allowing your photo to stand up. Laminate the photo. This step is optional, but I feel like it protects the picture while also making it a bit sturdier.

3. Using your trimmed photos to guide you, choose a jar or glass container. We started out using actual food jars with the labels removed. Each year, our jars get fancier and more elaborate. Sauce jars work just fine for single children while bigger, lidded containers work best for snow globes that will contain more than one child. No matter what type you plan to use, it is important to make sure that your photos will fit comfortably. I suggest taking the photos with you while you shop so that you can easily tell whether or not they will fit. (Note that a nicer jar will be a better quality of glass and will provide a more clear, undistorted view of the contents.)

4. Purchase fake snow. There are many different types available at craft stores or through Amazon. While snow is the only thing you actually need, it is also fun to shop for other accessories to create your scene. Christmas trees, tiny light strands, and little wrapped gifts all add a pop of color and interest.

5. Use hot glue to adhere everything into place. Once the glue is dry, sprinkle in the snow.

6. Choose a special and safe place to display your snow globe(s).