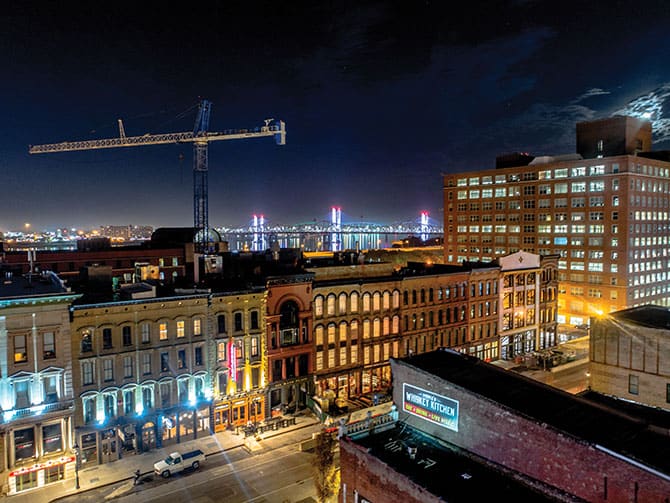 A Courier-Journal article in 2011 spurred Christy Brown to become involved in the Whiskey Row revitalization on Main Street. “These magnificent cast iron buildings were being threatened with demolition,” she says, and she felt she had to act. Phone calls led to meetings with city officials, investors, and other benefactors like herself.

Christy says it became clear early on that preserving the buildings required expanded types of partnerships. “There were lots of people who cared deeply about the cultural heritage of these buildings,” she says. Those unique partnerships ultimately led to the creation of Vital Sites, a nonprofit focused on adaptive reuse in development. Christy says one of the goals of Vital Sites is to prevent future demolitions of preservable buildings.

A fire in 2015 set the Whiskey Row project back, but most of the building’s shell is complete, and new tenants have moved in. Duluth Trading Company opened in November on the Main Street level. Other forthcoming businesses are a speakeasy and a German beer hall. This redevelopment gift is, of course, the preservation of these beautiful facades of historic buildings, but it is also the further revitalization of our downtown in the form of new businesses and increased foot traffic to the area. However, when we think about this gift, we cannot dismiss the spirit of perseverance in this project.

Insurance determined that the fire was a full loss and didn’t require that the project be rebuilt, but investors didn’t back away. “They doubled down by taking the insurance proceeds and putting them back into the building. It took every dime plus to get us back,” says Valle Jones, one of the co-developers of the project. Taking that risk and holding that vision of what Whiskey Row could be at completion are gifts to Louisville, too.

Read about how this community gift is giving aspiring chefs a foundation for starting a business.
Photo by Larry Vinson @kentucky_skywalker