China Opened the Eyes of this Puppet Master

China Opened the Eyes of this Puppet Master

Nora Christensen’s Turning Point may not have changed the direction of her life, but it certainly did change her.
By Lucy M. Pritchett 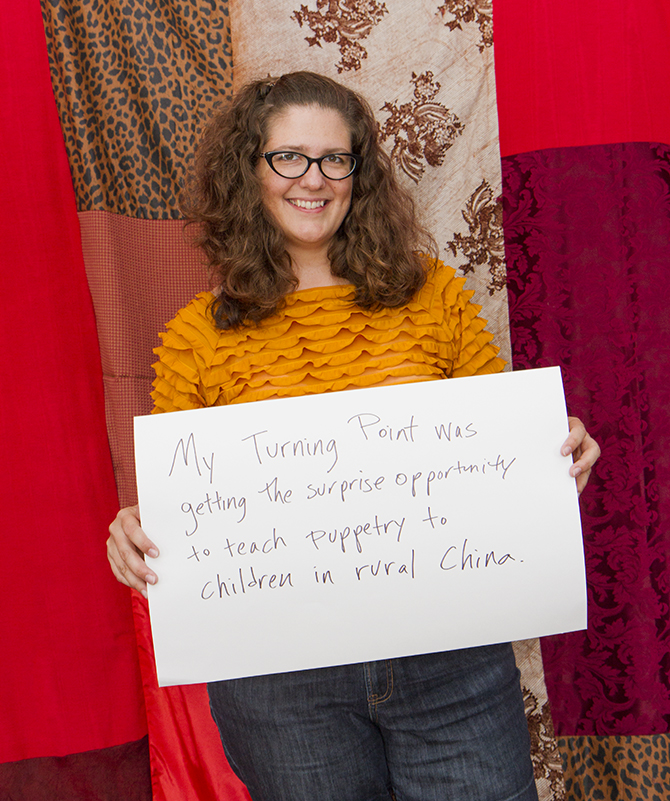 Nora is executive director and puppeteer (also known as The Puppet Lady) of Squallis Puppeteers in Louisville.

Last year she was invited to be part of an educational project in Xiang-E, China, a village in which hundreds of children died when poorly built school buildings collapsed during an earthquake in 2008. The project was established by University of Louisville math professor Wei-Bin Zeng.

“I was to join the music and language arts teachers from Kentucky Country Day School for the trip,” Nora says. “The idea being that we would help teach the children English in a creative way using music and the puppets. I had about three months to prepare. I had to raise $5,000, get my visa and passport, and shots.”

She had all her plans made, puppet supplies packed, and everything was in order. Or so she thought.

“From the beginning things did not go well. Due to a scheduling conflict, I was traveling on my own a few days behind the other people on the team. Every one of my flights was delayed, which meant I missed my last connection and had to sit in the San Francisco airport for 10 hours. I finally arrived in China at 4am after 22 hours of travel.”

To make matters worse, the airlines lost her luggage, including her carry-on bag that she was required to check. All she had was her purse, some money, and her passport.

On the second day of class her luggage finally arrived with the puppet-making materials she had packed. Originally there were to be 50 children in the weeklong workshop. They were selected from a group of applicants, but then 30 additional children, whose parents were in the government, were allowed to join as well.

“I fell in love with the children (ages 6-12),” she says as her face lights up in the retelling of her adventure. “I gained a respect for how hardworking and intense everyone was. At the end of the week the children performed a show in English for the parents and teachers. The kids made sock puppets on their own and put on a thank-you performance for us. Then all the sudden it was over and the children were gone.”

After the graduation, Nora spent four days by herself in the Sichuan capital city of Chengdu. “That was hard. I wasn’t surrounded by the bubble of love I felt in Xiang-E where I was part of a community. There, when we went outside of the school compound we were treated like rock stars. Women would come up to us and smile and hand us their babies to hold. In Chengdu I was just another tourist. I really had to force myself to get out and see things.”

The trip had a profound effect on Nora. She found things to be very different in a country that is 12,000 miles from Louisville. For one thing, she says, the government has a say in when airports are opened and when flights can take off and arrive. The water and electricity is turned off and on at whim.

“I couldn’t depend on being able to take a shower or even have lights on in my room. You can’t drink the water because it is so polluted. All the water has to come from bottles. Even when I could take a shower, I was warned not to open my mouth or to brush my teeth with water from a tap. Most of the immunizations I had before going were for waterborne diseases, mosquito, and avian-related illnesses. I had lots of moments where I thought ‘Wow. We have it pretty good in America.’”

She learned that things are going to happen that aren’t always according to plan and discovered that she could roll with that. “I saw that I could make do with what I had to work with. I also gained a greater appreciation for the life and things that I have here, but also I developed an absolute love of the Chinese culture. I have read 20 novels about China since I got back. I have it in my mind to develop a puppet show for kids here to teach them how awesome the Chinese culture is.

“I  have been so inspired to expand on what I saw and experienced there. The trip was definitely eye-opening.”