Changes Part 3: Knowing What to Keep and Toss Can be Tricky — But Not for Jill Rhoades

Changes Part 3: Knowing What to Keep and Toss Can be Tricky — But Not for Jill Rhoades 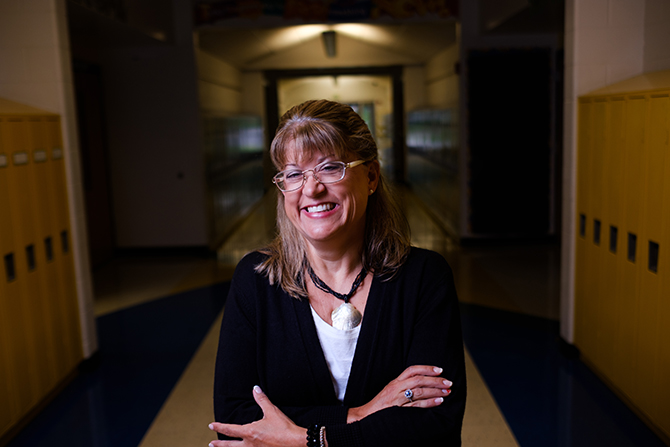 When Jill Rhoades’ last son went off to college, she and her husband were left with a big house full of stuff, but it felt empty. For years they had been threatening to downsize when husband Marty retired, but faced with their newly vacant home, they realized it was time.

“I had an ‘aha’ moment — we don’t have to wait. There was no sadness or regret, we just knew it was time for our home to be for someone else,” Jill says, reflecting about her decision to sell everything she owned and move from a suburban home at the foot of Paoli Pike in Floyd County to a condo in downtown Jeffersonville. Jill and Marty planned, purchased, and purged — trading their old life full of things and raising their three children to a new minimalist life full of time for leisure and getting to know each other.

The Rhoades family had acquired a menagerie of furniture over the years. Their 3,800-square-foot, four bedroom home could accommodate the furniture they had been gifted from family or purchased piece by piece, but their new condo was a fraction of the size at 1,350 square feet (including the balcony). So, they began the process of purging, beginning with offering items to their children.

“We warned them for two years that if you want it, you have to come get it,” Jill says. Her children, all in their 20s, weren’t interested in most of the sets, and at first she found their decisions to not claim certain pieces shortsighted, but she soon realized that making her children feel guilty about not taking the furniture was exactly what she wanted to avoid. “I realized that kids don’t want your stuff. It’s just stuff, and it was pretty easy to get rid of.”

Jill used a private Facebook group to sell the bulk of her furniture to locals in Southern Indiana. Although she was a bit rushed (her house sold in 20 days, so the move was a lot quicker than anticipated) and felt like she could have gotten more money for her furniture, she was able to sell six of her largest pieces in five minutes from her couch. Those that purchased her furniture (and attached memories) were sensitive to Jill’s situation and sent her pictures and stories of how they had been refinished and reused. “People listened to our stories and their kind messages made it a lot easier to part with our things.”

Jill also had to grapple with purging the plethora of childhood mementos she had saved over the years. She had amassed a whopping nine boxes for each of her three children and was faced with what to do as there wasn’t enough storage in her new place. “At first I had them all come over, but we just ended up taking trips down memory lane and not getting rid of anything, so I decided to invite them over one at a time.” Jill says it turned out to be a therapeutic experience. They would have lunch and go through the boxes, tossing what wasn’t important, taking pictures of or saving what was. Her children left with boxes of their childhoods and albums they put together, and most importantly, received closure.

Now, Jill’s new life is filled with a lot less stuff and a lot more time. Her fear of missing her garden and lion’s head fountain in her wooded backyard is no more. The condo’s gated community is filled with gardens she doesn’t have to attend to and the pools have five lion’s head fountains! While she used to spend the weekends cleaning and doing yard work, now she swims, works out in the fitness center, walks to the farmers market, and can ride her bike to work. Instead of being faced with an empty house and a laundry-list of chores, now her biggest concern is what she and her husband are going to do that evening. “We have a lot more leisure time and a lot more fun together. It’s fun to get to know each other again as a couple.”

Jill’s advice: Store memories each year. At the end of each school year, sit with your children and choose two important things to save. Instead, I saved everything and it was overwhelming to go through it all. I recommend taking photos of special projects, then tossing them. We had hundreds of CDs that we had collected over our whole lives. We listened to them all on our patio over an entire summer and burned them all to an MP3 player to save the memories. It’s like the soundtrack to our lives. Kids don’t want your stuff! Don’t make them feel guilty, and don’t feel guilty yourself, about not wanting your grandmother’s bedroom set. Detaching from your stuff is not as traumatic as you’d think.

Read parts one and two of this series for inspiration to make large or small changes in your life.