This season, take in the sights and sounds of all the great performances happening in our city. 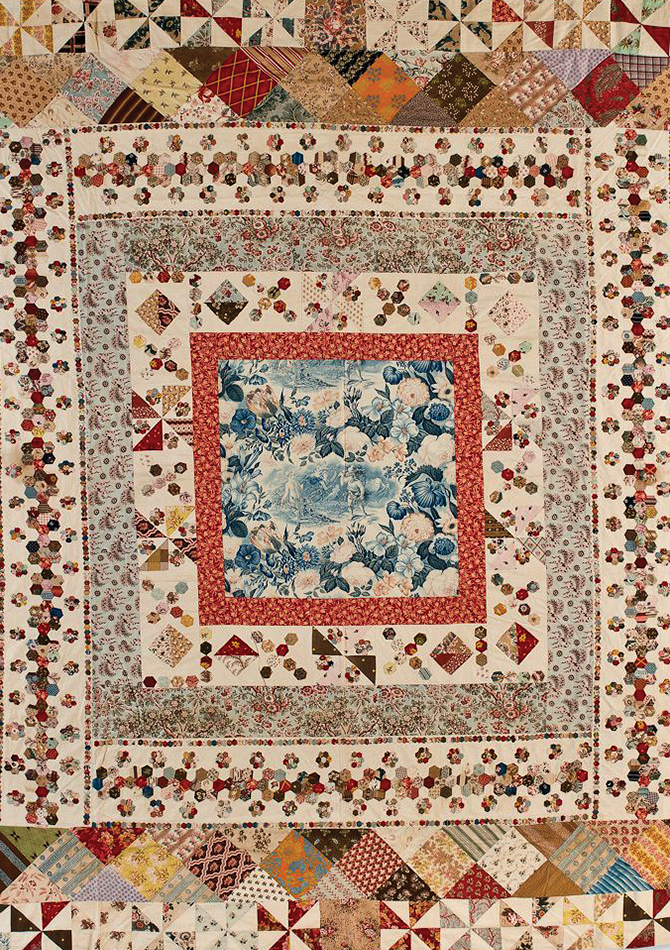 Pictures from Pieces celebrates the recent, generous gifts of 10 American quilts from Louisville’s Eleanor Bingham Miller. Eleanor began collecting quilts — particularly those made by Kentucky women — in the 1980s. The inspiration for this came from her work as one of the co-founders of the Kentucky Quilt Project, a landmark program devoted to documenting Kentucky quilts, their histories, and their makers.

The quilts, spanning over a century from the 1850s to the 1960s, are intricate testimonials to their makers’ diverse creative talents. Each artist possessed a unique eye for transforming pattern and color into works of art. Highlights include an exceptional, circa 1860 Kentucky quilt— one of seven Kentucky examples in the exhibition — attributed to Virginia Mason Ivey (American, born 1828) of Logan County. Her masterful composition echoes the state’s natural bounty with its imagery of cherry trees, flowers, and grapes. Another highlight: a dynamic, two-sided quilt created by Beatrice Pettway (American, 1928-1988) of Gee’s Bend, Alabama. 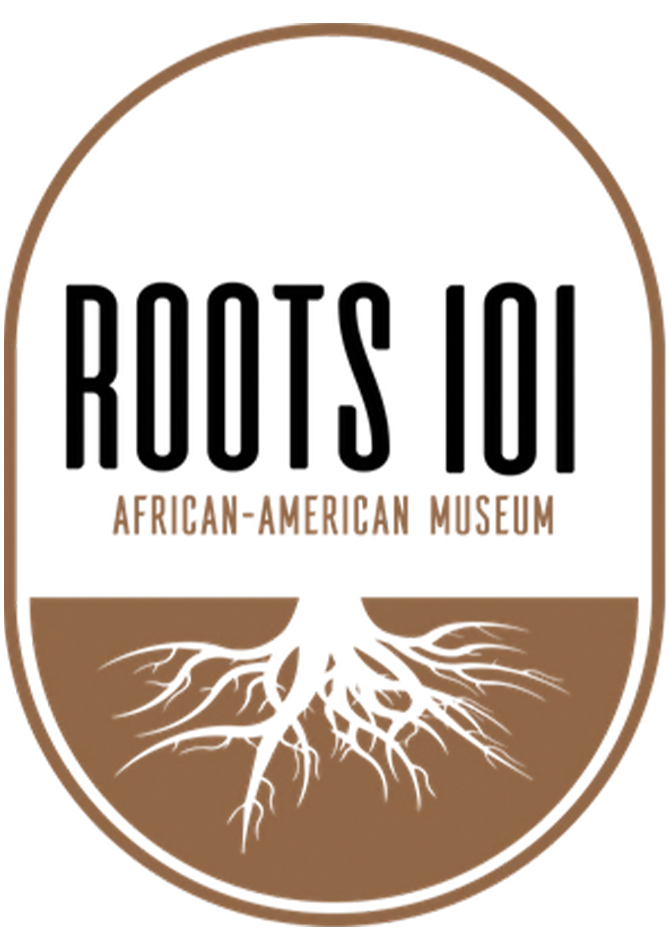 Included in the USA Today 10 Best list — ‘Best New Attraction’ category — is Roots 101: African American Museum, which singer/songwriter legend James Taylor made a point of raving about, not once…but twice, during his September concert in Louisville, which took place a few hours after Taylor had toured the museum.

In June 2021, the museum opened, with nearly 11,000-square-feet of space designed to host art and historical artifacts from Louisville and around the world. Its focus is to relate the African American journey “from Africa to all the ports between,” illustrating their history, culture, and art through exhibits and programs. 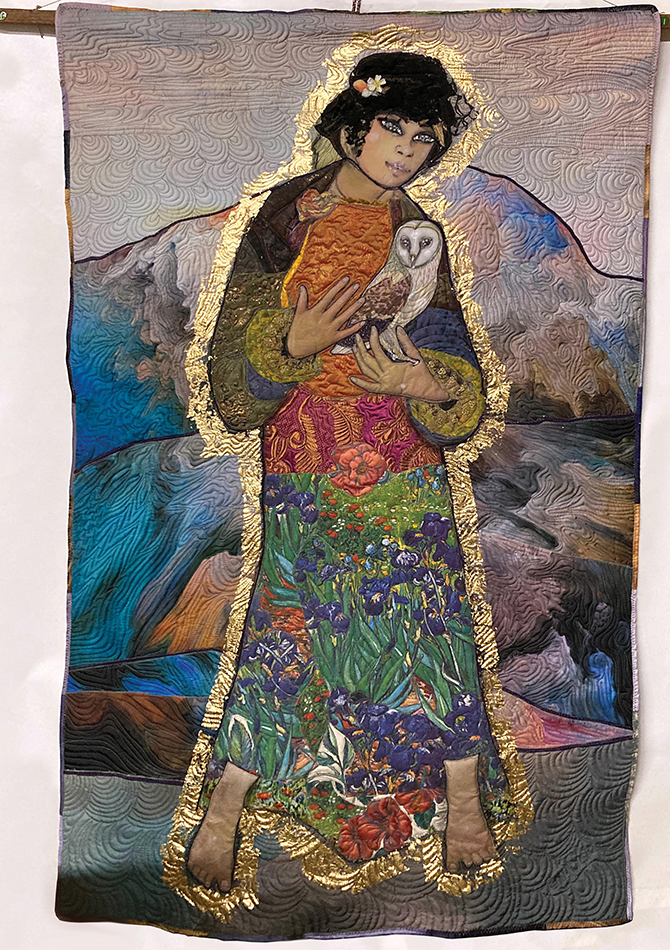 Penny Sisto at 80
The Carnegie Center for Art & History

This exhibition of recent works by the venerated New Albany fiber artist will be the 80-year-old Sisto’s eighth exhibition at the Carnegie Center. The exhibited works reveal a return of the artist’s focus to well-loved subjects from her decades-long career as an artist and midwife: powerful women, mothers with children, goddesses and other spiritual figures — all assembled from scraps of fabric and adorned with her signature diamond-like sewn details.

The Scottish-born Sisto has spent the past 33 years making expressive quilts (by some estimates about 200 per year) in a cabin in the woods that borders the Mount St. Francis Monastery in Floyds Knobs, Indiana. Recognizable in this most recent series are some of the artist’s favored motifs from over the decades, from humanoid creatures with antlers, women holding children, and the artist Frida Kahlo, to various religious icons — each figure appearing like a recurring dream or a memory from a past artistic exploration. 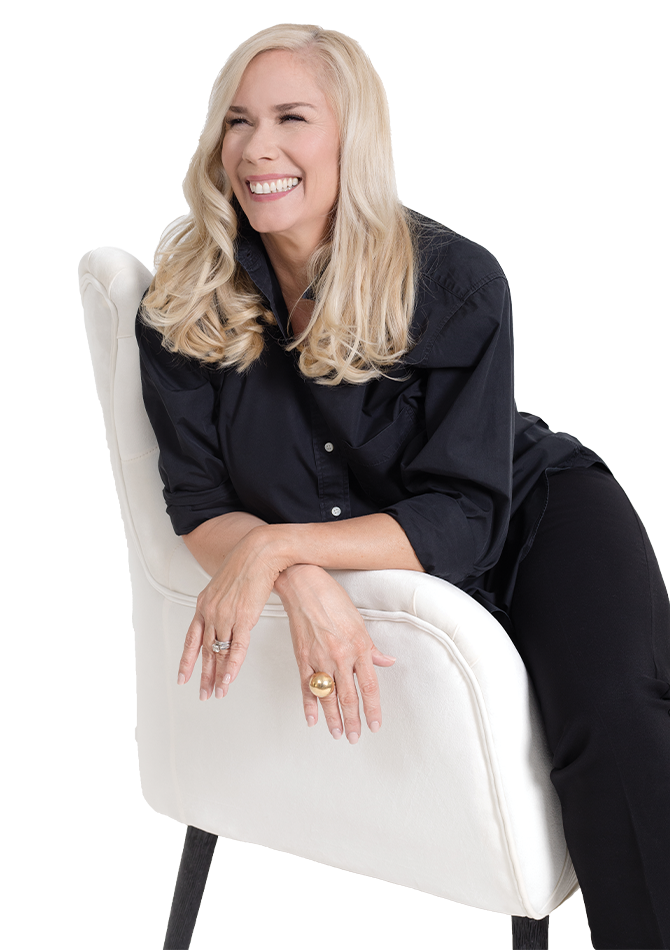 Leanne Morgan: You’ve Got a Friend in Me

When comedian Leanne Morgan was recently asked by the Arts Insider if her southern homespun PG-rated stand-up act plays well no matter where her tour dates are in the U.S., it never occurred to me that the Tennesse native’s answer would sound like an episode from an actual sitcom.

Speaking by phone, Leanne explains: “I figured this out about 10 years ago when doing a showcase in Los Angeles and being accidentally booked on ‘Syrian Night’…a fundraiser for a community intended to get ping pong tables for people in the Middle East. And here I am…a big white country woman about to do a set in front of Middle Eastern people, so I was scared to death. But after I got off stage my producer said, ‘Oh, my gosh, Leanne, you’re really not a southern comedian. It’s more universal than that!’

“And even though I have a heavy southern accent and am from the country, I talk about husbands, children…going to Weight Watchers, feeling fat, and menopause. So, what I talk about is universal, even though it’s with a big, heavy accent,” she concludes in her thick (think Dolly Parton) accent, then pauses until the Arts Insider can stop laughing.

Interviewed while driving from her Knoxville, Tennessee, home to an Atlanta tour date as part of her 100-city The Big Panty tour, Leanne says her audiences are mostly women. “Although there are more and more men coming with their wives, or with their moms. Yes, I will have precious young men who will bring their mammas. The average audience age is 35 to, honey, all the way up. I’ve met 85-year-olds who’ve never been to a comedy show before coming to mine. Something else I think is precious is to notice an 80-year-old mom, her 50-something age daughter, and her daughter.”

Leanne mentions that when the COVID-19 outbreak shut down theaters all over the country, which included the original launching of The Big Panty tour, she thought to herself, “Oh, my gosh…it’s over before it even started, and was the biggest thing to have happened to my career in my 22 years of doing stand-up!” Instead, during the pandemic her social media page grew to over one million people, who also talk to each other on her page.

“Like, if I shared a recipe that I was making for my mother (who’d suffered a stroke a few years before), and the type of foods she had to have, you wouldn’t believe the thousands of people who gave me recipes. And then they would talk to each other, [and say] ‘Hey Diane, I use cream of chicken instead of cream of mushroom, but I’m gonna try your recipe.’”

Something else Leanne’s fans often declare to her be it online or in person, is ‘I know we’d be best friends if we were neighbors!’

“And everywhere I go, when I look out into the audience, I think to myself ‘I would be their best friend. If I lived here… I know [that] I’d be hanging out with them!’” she enthuses, going so far as referring to her legion of fans as “like a big friendship.”

By way of example Leanne then proves her “friendship” remark by revealing what goes through her mind at the conclusion of every single concert, which is: “I wish I could go home with all of them and clean their house…make a casserole…or vacuum their car out. Because they are just so good to me.” 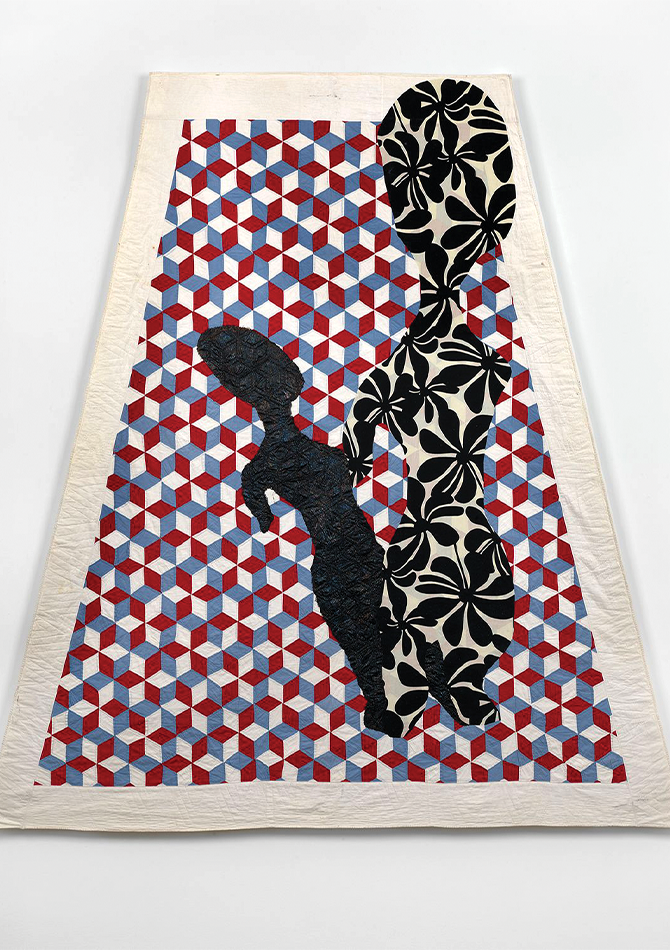 Sanford Biggers: Codeswitch is the first survey of quilt-based works — inspired, in part, by the rich creative legacies of African American quilters — produced by the American interdisciplinary artist Sanford Biggers (born 1970). The works, part of Biggers’ Codex series, consist of mixed-media paintings and sculptures done directly on or made from antique American quilts. Through this process, Biggers produces works that signal the original quilters’ creative intent and present new layers of meaning through his artistic interventions. Reflecting on the original quilts and his interventions, Biggers notes that, “Some have already been altered and re-contextualized by subsequent owners, and I see myself as a late collaborator, contributing to their history and function in this present moment.” The exhibition consists of 34 quilt-based works dating from 2012 to 2020 and two video works dating from 2000 and 2014. 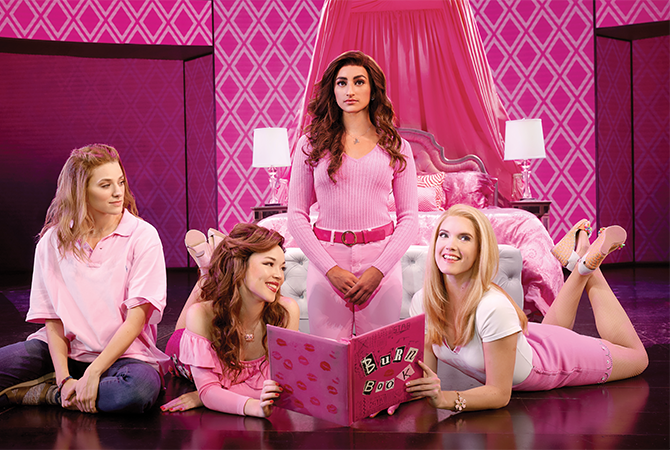 Based on the 2004 hit teen comedy/teen film, the musical Mean Girls features a book by nine-time Emmy Award winner Tina Fey, based on her screenplay for the film.

Cady Heron may have grown up on an African savanna, but nothing prepared her for the wild and vicious ways of her strange new home: suburban Illinois. How will this naïve newbie rise to the top of the popularity pecking order? By taking on The Plastics, a trio of lionized frenemies led by the charming but ruthless Regina George. But when Cady devises a plan to end Regina’s reign, she learns the hard way that you can’t cross a Queen Bee without getting stung. 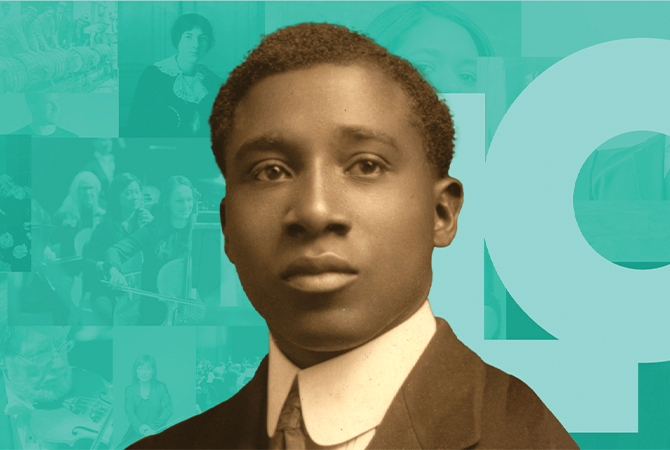 Conductor Teddy Abrams and the Louisville Orchestra will give a performance exploring the commonalities between Black and Jewish music, the first in a projected multi-season series. Featured in the concert is violinist Julia Noone, assistant concertmaster of the Louisville Orchestra, performing Korngold’s D-major Violin Concerto. Also on the program is the LO-commissioned Notturno by Ernst Toch, who like Korngold fled his native Austria after the rise of the Nazis but whose fame did not survive his transplantation to the U.S.

Crowning the program, the Louisville Chamber Choir will perform the spectacular oratorio The Ordering of Moses by R. Nathaniel Dett, one of the first conservatory-trained Black musicians in the U.S. The oratorio, considered the greatest work of the Canadian-born composer/organist/ pianist/choral director/music professor, was premiered by the Cincinnati Symphony during the May Festival in 1937 and broadcast nationwide, which may have marked the first network broadcast of a major work by a Black composer, although unfortunately, the broadcast was interrupted two-thirds of the way through for an unknown reason, speculated to be listener complaints.