Are There Any Good Men Out There?

Are There Any Good Men Out There? 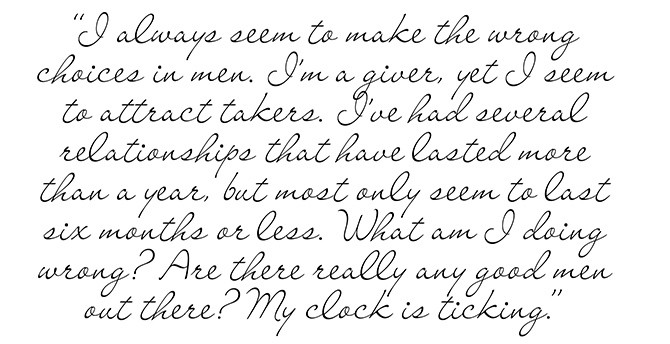 Q: “I always seem to make the wrong choices in men. I’m a giver, yet I seem to attract takers. I’ve had several relationships that have lasted more than a year, but most only seem to last six months or less. What am I doing wrong? Are there really any good men out there? My clock is ticking.”

Joyce: When making right choices, even wrong can turn out alright.

Yes, there are really good men out there. But even really good men will trample on a heart when given permission. It might not be what you’re doing wrong, rather that you are trying to do what’s right at the wrong time. Let’s evaluate a means for you to be more selective in your process.

Exercise discernment. It is a valuable tool in the selection process for developing relationships of a more intimate nature, whether romantic, familial, or just as close friends. Making good choices involves assessing more than physical attraction or interests you might have in common, especially in matters of romance. Some things you might consider are:

1. What sort of history does this person bring with him? Inquire about his jobs, his past relationships (how many and how long they lasted). Check out his demeanor on social media sites. Does he have long-time reputable friends in his circle? Does he have an excessive drinking and/or narcotic problem?
2. Does he treat his parents, friends, employer, and you with respect?
3. Does he honor your boundaries and take no for an answer?

Develop a set of standards. People often make the mistake of either limiting and/or comprising their ideas of a good choice for a partner. Some are guilty of having no criteria to begin with, which broadens the playing field considerably. The danger in this scenario is anyone would be acceptable as a candidate, even at the risk of damaging the heart. It’s not selfish to have standards. It’s protective. Make sure your measuring stick of principles includes more than the physical. I’ve known some really ugly handsome men!

Don’t ignore red flags. Having been through several rounds of relationships, you should have a really good sense of warning signs to look for. Emotional attachments have a way of blinding our logic. Love yourself enough to take a detour at those familiar warnings. If he’s the wrong one, waste no more time in the relationship. Hence, you’re not being dumped — he is.

Take a break from love. Eagerness to be in a relationship can make you desperate, and desperation only invites more pain. Give it a rest until you assess each of your past relationships. Look for patterns of things you might have done wrong versus the other person involved. Then, develop standards for which you’ll gauge your next attempt at love.

You desire companionship. We were designed for such. But your desire will never be met unless you find someone who will cherish and respect you, not use you and then be on his way. Stop giving permission to be hurt. If he isn’t willing to give 100 percent to the relationship, don’t be so inclined to give your 150 percent. My husband and I have enjoyed a fulfilling marriage. One of our secrets is that we can’t out-give each other. We serve. We meet needs. We respect. We forgive. We love. It is a formula that we began in our courtship and one which has served us well for more than four decades. I encourage you to find a man who will do those kinds of things for you because I believe you have those qualities already. Don’t settle. There’s a wonderful man longing to find a woman just like you!

Struggling with a relationship issue? Write Joyce Oglesby at justaskjoyce@gmail.com and find a solution for life. You can also watch the Just Ask Joyce Show on a local television station near you or view it here.

Here’s another compelling reason  not to settle for less than you deserve in a relationship. Have you been in a similar situation? Tell us about your experience?