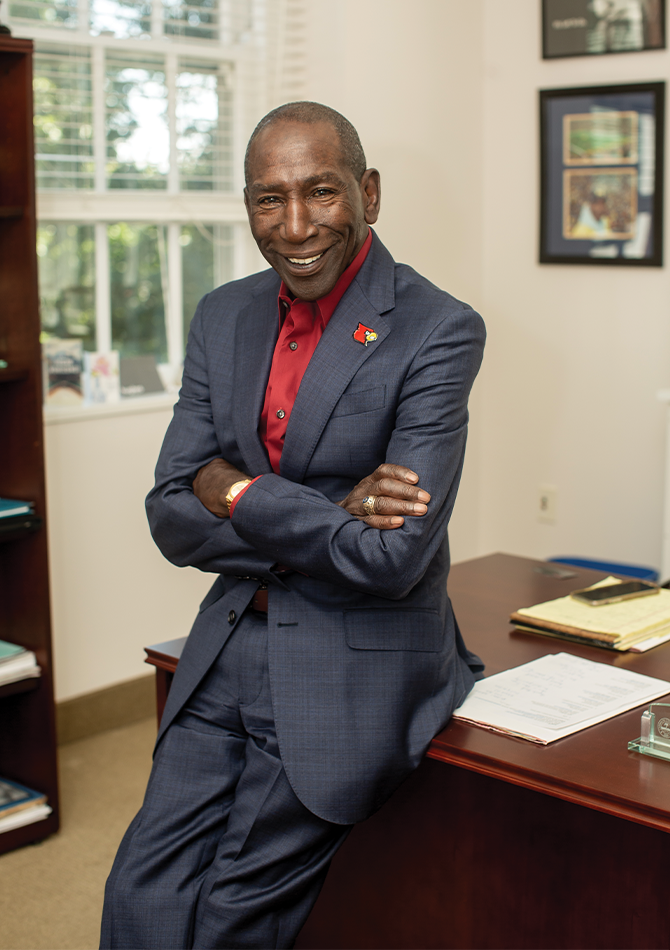 “We have to be strategic about listening to the voices of the community. It’s important for us to understand that change is going to take all of us.”

Since joining the leadership team in May 2022 as Vice President of Diversity, Equity & Inclusion at the University of Louisville, Lee Gill hasn’t sat still for a minute. His infectious enthusiasm for the UofL community and Louisville at large has played out in his constant cultivation of relationships on and off campus.

Picture him in these places: conferring in a meeting room in the Kosair Building on the Health Sciences Campus, ordering breakfast in a coffee shop on Bardstown Road, visiting the Muhammad Ali Center, walking on West Broadway… In each scenario, chances are high that Lee’s not speaking. He’s listening.

“We have to be strategic about listening to the voices of the community. It’s important for us to understand that change is going to take all of us,” Lee says. “That’s why we are restructuring and actually having community organizational leadership as part of our Diversity Council here on campus. We’re now calling it the Inclusion and Equity Council.”

Reorganizing the composition of the council is just one of the ways that listening and learning translate to action for him. Each move he makes is part of an integrated strategy to make a positive impact, with an eye toward pivotal changes that can spark the state economy.

“Making sure our Pell Grant eligible students who are 40% of our student body, and first-generation college students graduate is a major focus. We have a great opportunity to see that they succeed. Imagine if you are the number one university in the state of Kentucky when it comes to Pell-eligible students, and you’re graduating those students. Imagine the impact on the state economy.”

Lee speaks highly of his team, particularly Chief of Staff Diane Whitlock, who is a stalwart supporter of his mission. Whitlock is well aware of the complexities involved in Gill’s transition from Clemson University and has helped clear a path for him in his new city in every way possible.

“Lee’s vision involves impacting not only all of the units on campus but the city as a whole. And particularly with him just coming on board, there are so many demands on his time that there are a lot of things that I do that are routine to allow him the freedom to get to know the campus and city and engage in higher-level programs and initiatives,” Diane explains.

Lee is grateful to have such a supportive team and community members who have gotten behind him and his vision for UofL and Louisville in general. “I have been extremely pleased with the reception that I’ve had from community leaders, faculty and staff as well as students,” he says. “I love the tremendous assets that this community offers to be able to drive social change.”