A Mother-Daughter Bond: Stronger Than Cancer

A Mother-Daughter Bond: Stronger Than Cancer 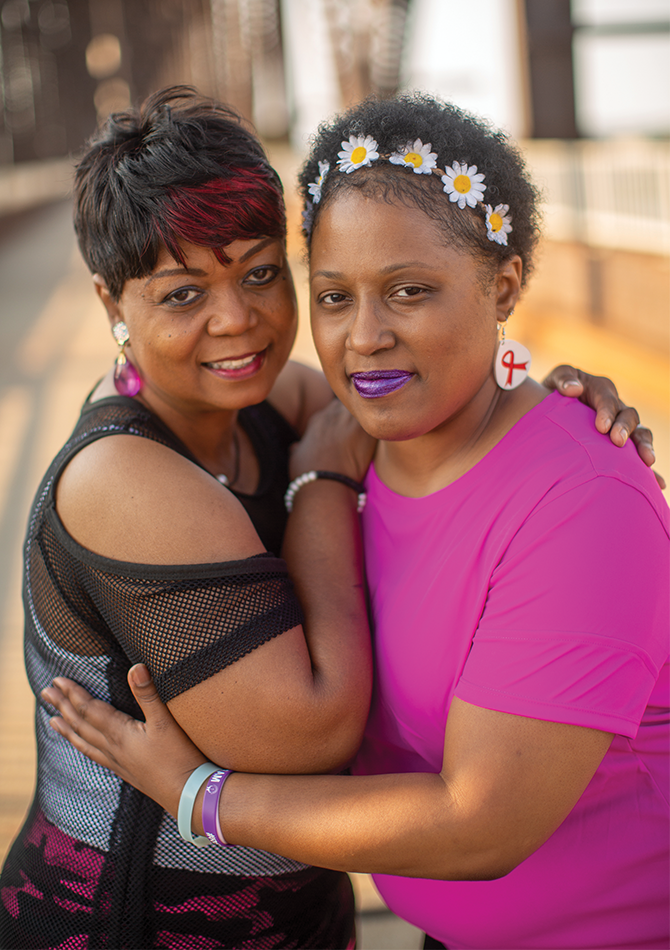 “My daughter was 26 at the time [of my diagnosis]. She was really afraid because automatically the possibility of death comes in. I love life and I wanted to be here for her and I knew I would do whatever I had to do.” – Wanda Anderson

Mother and daughter Wanda and Wynika Anderson like to go for long walks together. Trekking across the Big Four Bridge is a favorite pastime and a tradition they won’t give up any time soon.

“We really enjoy going across the bridge, over to Indiana. My grandson, if he’s with us, sometimes he wants to stop and get ice cream and we stop at all the other little vending shops, too,” says Wanda on describing an idyllic Saturday.

In March of 2008, things weren’t looking so bright. Wanda had just lost her job of 20 years, and she didn’t have health insurance.

“I had spoken with my mom, telling her I felt something in my breast. She told me Norton Healthcare has this program, and you are probably eligible for it. She gave me the number and I called. The mobile unit was on 3rd Street and I lived in that area at the time, so I went and had my mammogram done,” Wanda recalls.

Soon after she had a biopsy at Norton Cancer Institute on Broadway. She got the call on a Monday. She had stage 4 breast cancer.

Reflecting back on the diagnosis she received 14 years ago, Wanda’s emotions naturally well up. “I literally had to ask if I could call them back,” she says. I had to absorb those words.”

Once she accepted the news, she immediately determined she would fight for her life. “My daughter [Wynika] was 26 at the time [of my diagnosis]. She was really afraid because automatically the possibility of death comes in. I love life and I wanted to be here for her and I knew I would do whatever I had to do. If I had to get chemo, if I had to go through these changes, that’s what I would do.”

What followed was the best care and treatment Wanda could have asked for. Dr. Laila Agrawal, her oncologist, guided her through the journey with empathy and understanding, illuminating every possible side effect and outcome so there would be few surprises.

“She pays attention. She, the nurses, everyone, they were constantly checking in, regularly calling me. And when I walked in for an appointment, they always knew who I was,” Wanda says.

With the Norton Cancer Institute team behind her, Wanda battled her cancer and won. She would find out several years later that another fight was in store.

Last year, Wanda’s daughter Wynika felt lumps in her breasts. “I was on the phone with my cousin,” Wynika says, “and I felt something funny on my breast. I called my mom and was like something feels funny.”

Wanda gave her daughter the same advice that was given to her: “Go to Norton.”

Wynika was diagnosed quickly, and for the past year has been on her healing journey with staunch support from her mother.

“Nika had her surgery on my 60th birthday, which was September 30th,” says Wanda. “Her surgery was on a whole ‘nother level. I had one breast removed, but she had both removed.”

Wanda sees her daughter as a superstar. Even though she was undergoing radiation treatment, Wynika would still go to work the next day. She works in a retirement home where there was potential exposure to germs that could have penetrated her weakened immune system, but Wynika masked up and went anyway. There were times when her treatment would cause her to vomit in the morning, but Wynika still soldiered her way through her work day.

Now that both their health is restored, mother and daughter are back to their walks over the bridge. If it’s Saturday, Wynika’s son is accompanying them and they are stopping for ice cream. They’ll visit the boutiques in the area. The new normal is much like the old
normal, with something added: their shared survivor’s bond.