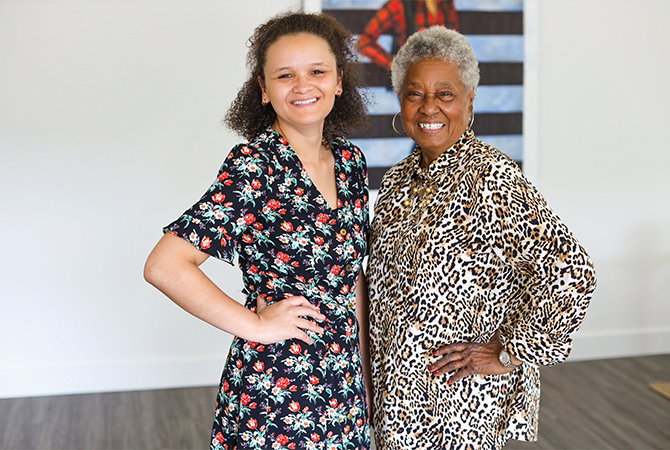 Keisha Combs (left) and Virginia Bradford. KAAAC focuses on closing the health gap within the Black community through providing education, empowerment and navigation to cancer screenings; and Gilda’s Club offers support to anyone who has been affected by cancer.

“We don’t want anyone to face cancer alone.” – Keisha Combs

Reducing health disparities in West Louisville is a huge undertaking, but the partnership between Kentucky African Americans Against Cancer (KAAAC) and Gilda’s Club, could be a game changer. In October 2021, Gilda’s Club opened Gilda’s West, a satellite office in the Republic Bank Y and shares the space with KAAAC. Together, they offer support groups, educational programs, social events, healthy lifestyle offerings, resource and referral, cancer screenings, cancer-specific short-term counseling, and more, and everything is free to participants.

“We don’t want anyone to face cancer alone and believe in helping people live their best lives while cancer is a part of it,” says Keisha Combs, Gilda’s West program manager. Keisha knows first-hand the isolation and fear people face when they or a loved one has been diagnosed with cancer. “Most people have had an experience with cancer. For me, it was my dad, who died when I was 18. We were in rural Meade County and resources were scarce. It would have been amazing to have had Gilda’s Club when my family was going through [this],” she says.

In 2019, Keisha interned with Gilda’s Club and learned how the organization’s work positively impacted the community – it became the motivating force behind her career choice. “When this job opened, I thought ‘I experienced that support isolation, and I know this community could really benefit from the free support at Gilda’s Club,’” she says. Keisha, who is also a mental health professional, says she is thrilled to be filling such a critical need through Gilda’s program of support.

Virginia Bradford, the community outreach coordinator for KAAAC and the Harriet B. Porter Cancer Education and Research Endowment, works alongside Keisha. She has been a registered nurse for 50 years and has been with KAAAC for 30 years. “My mission, vision, [and] passion has always been community health,” she says. Virginia became interested in this field after losing a friend to cancer. She also learned about the health disparities in the Black community and wanted to help change the situation. “We know African Americans have always had a fear of the word cancer, because they think if ‘I get cancer, I am going to die.’ It was important for us to give them the correct information to empower them, and mobilize other groups to help us get the word out about cancer treatment, diagnosis, early detection and prevention,” she says.

For Keisha and Virginia, educating West Louisville residents about all the available resources will be instrumental in changing the health outcomes for many, and they believe that together they can have greater influence. “With this partnership, we feel like we can have an extended reach in getting the word out that we are here to support, encourage, empower and be the resource that is needed in this community,” says Virginia.