Two Women to Watch in our Foodie Scene

Two Women to Watch in our Foodie Scene 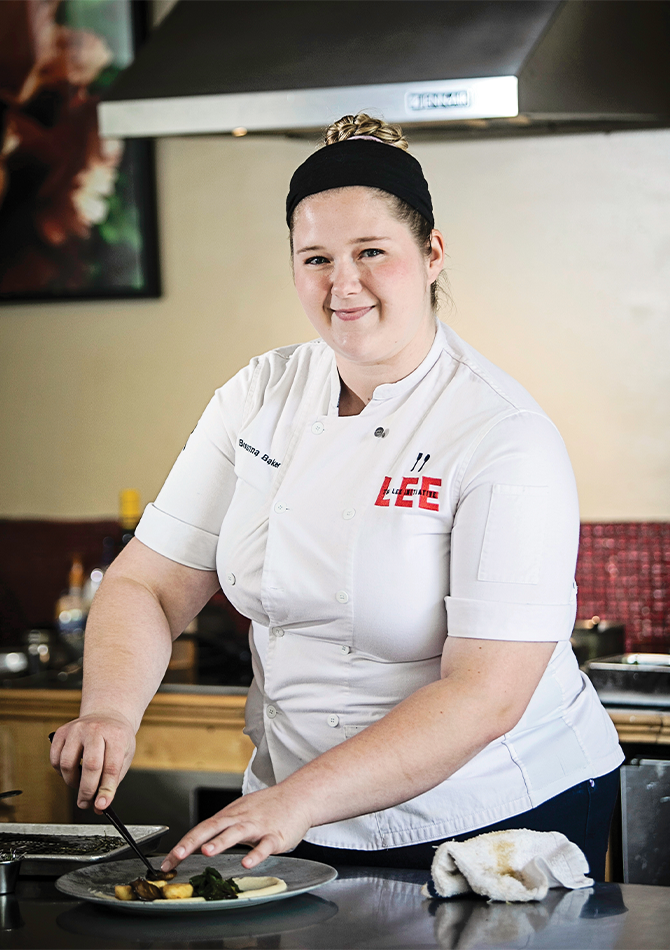 610 Magnolia sous chef Breanna Baker was accepted into the Lee Initiative program in 2020 and was mentored by Top Chef winner Brooke Williamson.

While the word “chef” may be genderless, the archetype is unquestionably male. Fortunately, our local restaurant scene is becoming an exception — thanks to the tireless work of talented women and, in part, to the opportunity provided by the Lee Initiative’s Women Culinary and Spirits program. Here are two recent Initiative grads and rising stars who are adding a new flavor to our foodie culture.

For women in the culinary world, gender discrimination is as expected an occupational hazard as occasional burns or cuts. The numbers are shocking. While women hold 56% of the jobs in the restaurant industry, they occupy less than 75% of the leadership roles. If that’s not discouraging, women in culinary careers make on average a third less than male counterparts in the same jobs and more than 70% of them are sexually harassed by managers and co-workers while earning their smaller pay checks.

Yet women persevere and, locally, they are starting to make inroads. “The first woman chef I worked for was through my Lee Initiative mentorship with Brooke Williamson,” says Breanna Baker, a former intern at 610 Magnolia who was accepted into the nationally renowned mentorship program and is now the sous chef at 610. “Every other restaurant I’ve worked in had a male chef.  It was empowering to see where my career could take me if I continued to work as hard as she did.”

Here’s what she and Red Hog Head Chef and fellow Lee Initiative grad Katie Smith have to say about being women on the rise in our city’s restaurant world and the edge that they gained from this female empowerment initiative started by Edward Lee and former 610 Magnolia GM Lindsey Ofcacek. 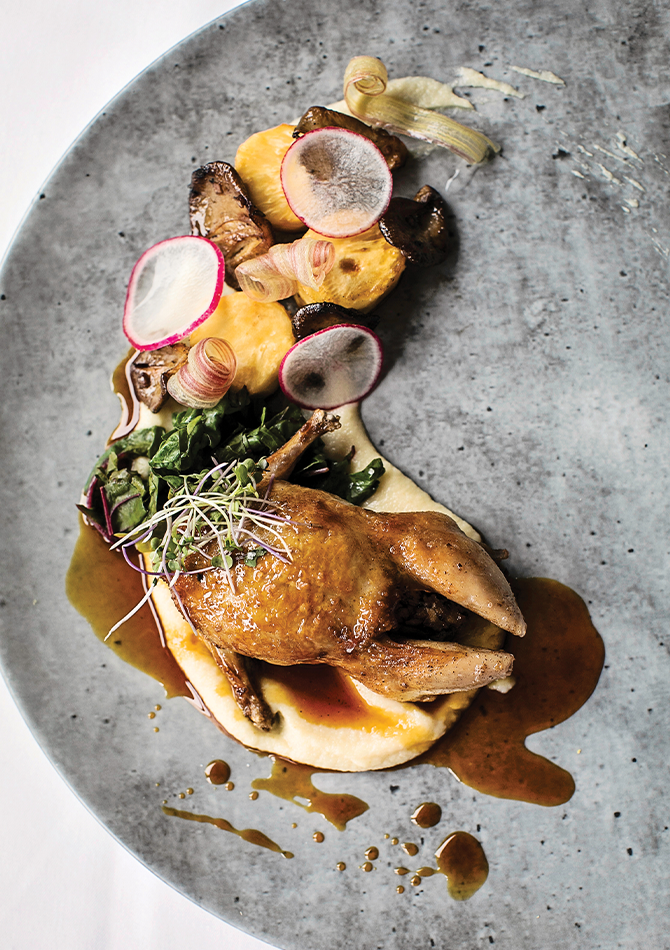 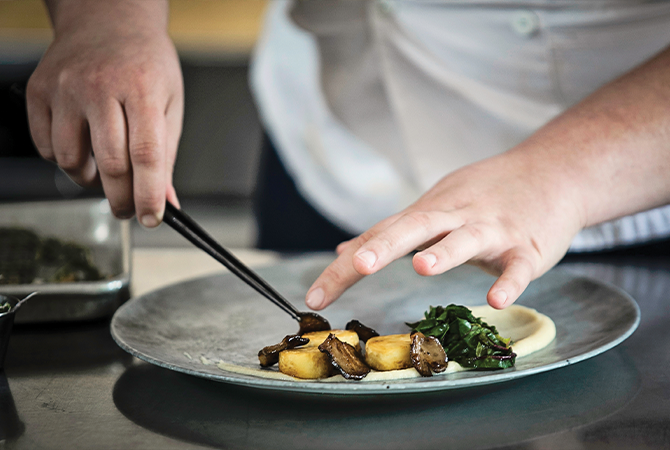 Above: Quail stuffed with mushrooms duxelles glazed with burned honey gastric. Below: Breanna works on the plating for the dish at 610 Magnolia.

Have you experienced discrimination in your culinary career?

“Not directly, but I also didn’t see a lot of women chefs in our state or city.”

How did you get involved in the Lee Initiative?

What was the biggest take-away?

It was definitely a lot more pressure than I thought it would be. While I was in the program, I was also going to school for my bachelors at Sullivan — even during my mentorship with Brooke.  I went to LA and cooked for her and rather than getting out and exploring, I was in a trailer taking my finals. It was all very intense and we had all of these experiences crammed into six months. It’s almost like you get even more out of it when you step away. It hit me that, hey, I’ve cooked at the James Beard House.”

What are your career goals?

“Working with Brooke really broadened my horizons. I worked at her main restaurant Playa Provisions. Playa was right on the beach front but it included a lot of different concepts from fancy to not. I saw everything she had done with Top Chef and being on Food Network shows and how she progressed in her career. She became more of a TV personality. She had to travel a lot and she hired people to run her restaurants. It was interesting to see the community that she built so she could go out and be in the public eye. It made me see that I had options.”

What excites you most about your work?

“The sense of community here. This is the first restaurant I have worked in where we have the same number of women and men in the back of the house. Every other place has been male-dominant. The community around you is as important as the food.”

How have your career goals evolved?

“I was originally of the mindset that I was super ambitious and wanted to move out to LA, but because of the shutdown that didn’t happen. It shifted my focus. My goal now is to cook good food that people will enjoy. We’ve headed in that direction at 610. Food is based on comfort– not on dehydrating ingredients because it’s a trend and because I can.”

What kind of food do you want to bring to the world?

My style has changed and the style at 610 has become a little homier. It’s still fancy and we plate it beautifully. But, a lot of the dishes on the current menu are inspired by foods from our past. I love strawberries and cream because it’s a flavor from my childhood and one of the desserts I’ve created is a chamomile flan with macerated strawberries, lemon curd, candied lemon zest and candied magnolia blossoms from a local partner. (They taste kind of like ginger.) How incredible is it to work in a place where we have partners that create magical flavors like this? I’m also mad about mushrooms and I’ve created a dish with honey meringue, goat cheese and mushrooms. Creating a new dish is so rewarding. You start with a rough idea. Once it progresses into a dish that goes onto a menu, this is what all of my stress pays off.”

What are your long term goals?

“To continue working in restaurants and advance to become an executive chef. It’s definitely a goal of mine to be in that leadership role and to support women below me.”

Have you seen change for women?

“I definitely do feel there are still a lot of inequalities that we face as women. But what the Lee Initiative is doing and how they’re supporting women chefs in their personal and professional lives, it gives me a lot of hope. It used to be that you could be a chef or you could be a mom. Now, there are more places where you have the support to be both.” 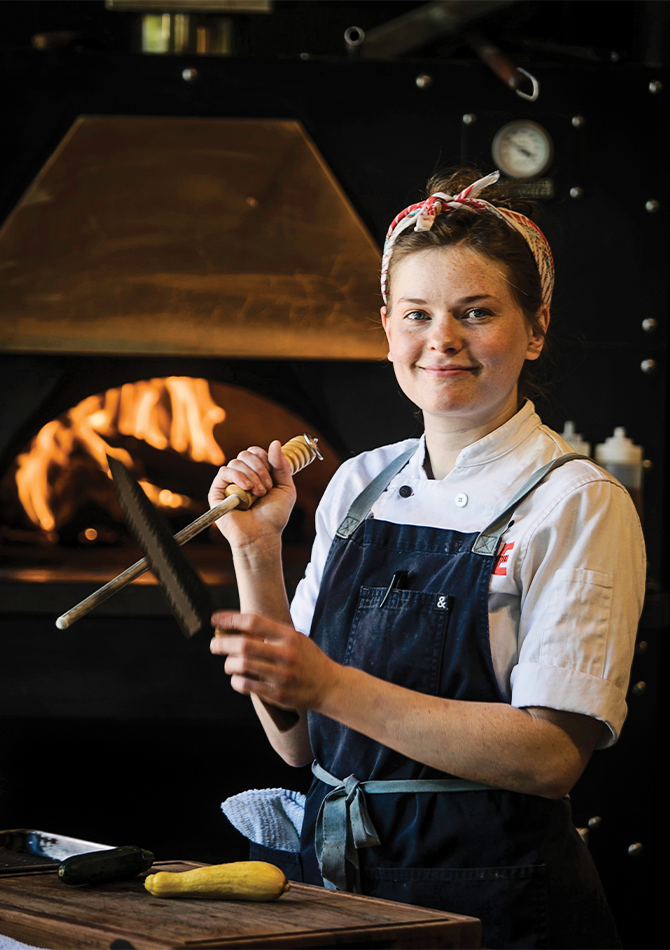 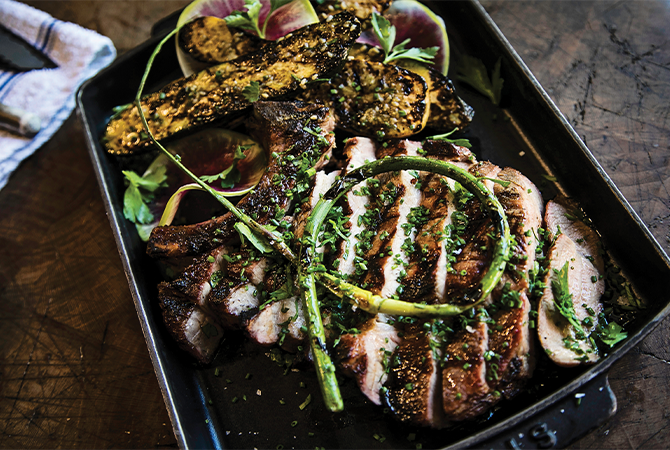 Above: Katie Smith, the head chef at Red Hog, was a part of the Lee Initiative in 2019. Below: 3D Valley Pork Chop with Grilled Summer Squash. “I am really dedicated to farm to table, to ethical sourcing of local produce and proteins,” Katie says.

How does it feel to have your first head chef gig?

“I started working at Red Hog about two and half years ago and recently took over as head chef about three months ago. It definitely came as a surprise. The chef at the time — Noam Bilitzer — was a really good and dedicated chef and it never crossed my mind that he would leave. I had gotten burned out in my last job as a sous chef and came to Red Hog as a line cook to chill out and take some time to think. I was promoted in six months to sous chef and now here I am.”

Can we see your influences on the menu yet?

“I’m taking my time making slow changes. There will be a lot of things that will never go away.

I would say that the cheeseburger is a staple. We may change the sauce, but we will always offer a cheese burger. The overall direction will remain the same. We will work with a butcher shop to offer really high quality proteins that are sourced locally and raised and harvested sustainably. We carry that vision out with produce as well.”

How did the Lee Initiative impact your career trajectory?

“I did the Lee Initiative in 2019 — all pre-pandemic — and I was 25. I made a lot of connections and had amazing experiences and came out with so much confidence and so many plans. I had tons of events lined up and so much excitement and momentum and it went straight into a brick wall. With the pandemic going down, I had just taken a job opening a new restaurant and was going to be the chef de cuisine. We weren’t able to open when we were supposed to and that started the long and painful process of relearning how to do this with all of these new rules. Then constantly getting shut down again. That first year was all twists and turns of opening and closing and it became really hard.

After a year of that, I decided I was going to reset. I found myself at Red Hog as a line cook. It was a good chance for me to reflect and process and to work for Noam who really was a hands-on and responsible and present chef. It was really refreshing for me. Being part of a strong team and working for a woman-owned business with an owner who cared as deeply about her staff as she did profitability. It reminded me why I love doing this and gave me the will to continue in this field.”

Had you experienced discrimination in the industry?

“I would say that I would have been where I am a lot sooner if people had been a little more willing to give me a chance when I was younger. Historically, people don’t think of young women as strong cooks in a professional setting. You get a lot of, “Don’t you think you’d be happier working the hostess stand? Or, we’re just going to start you on the pastry stations on desserts and salads and never teach you anything new.”

What made you apply for the Lee Initiative?

“I had a friend I worked with at Holy Grale who did the program and kept encouraging me, but I didn’t feel ready. The application process is extremely difficult. The first year, she applied and got in and I didn’t apply. Then she came back and told me how great it was and I decided to try the next year, but I barely even submitted my application in time. It was so painstaking for me to do — for me to try to convince someone to invest in me. But that’s exactly why I needed the program. And, now, when I encourage other women to apply and they say, ‘I just don’t think I’m good enough,’ I say, ‘You’re going to come out realizing that you ARE good enough.’”

What type of food do you want to bring to the world?

“I finally have this platform to really figure that out. I am really dedicated to farm to table, to ethical sourcing of local produce and proteins. I am also dedicated to letting the people on our staff besides the figureheads express who they are and showcase their skill sets.

My mentor was Ashley Christianson, a James Beard award-winning chef with four or five restaurants in North Carolina. I learned from her that it’s really important to have the confidence and humility to allow people to do what they’re good at and to not worry about whether they’re better at it than you. I always try to apply that thinking to my management approach. ‘Hey you’re really good at that and you should do it.’ And not try to say, ‘This is all my show.’”