The Ladies of Justice

The Ladies of Justice Justice may be blind, but in Louisville, justice is also female. Meet seven women jurists who are shattering the judicial glass ceiling and changing the face of the courts.

The women of Louisville’s Jefferson District Court have come a long way. When voters elected the first judges back in 1978, only two were women. Today, only one is a man. This female majority, however, isn’t the case nationwide. Only about one-third of judges in district courts across the country are women, which would suggest that Derby City might be ahead of a trend — and Today’s Woman is here for it. The seven judges we’ve featured are excited to be a part of the movement here in the Bluegrass, and each one is doing her part to pave the way for future women of the courts. 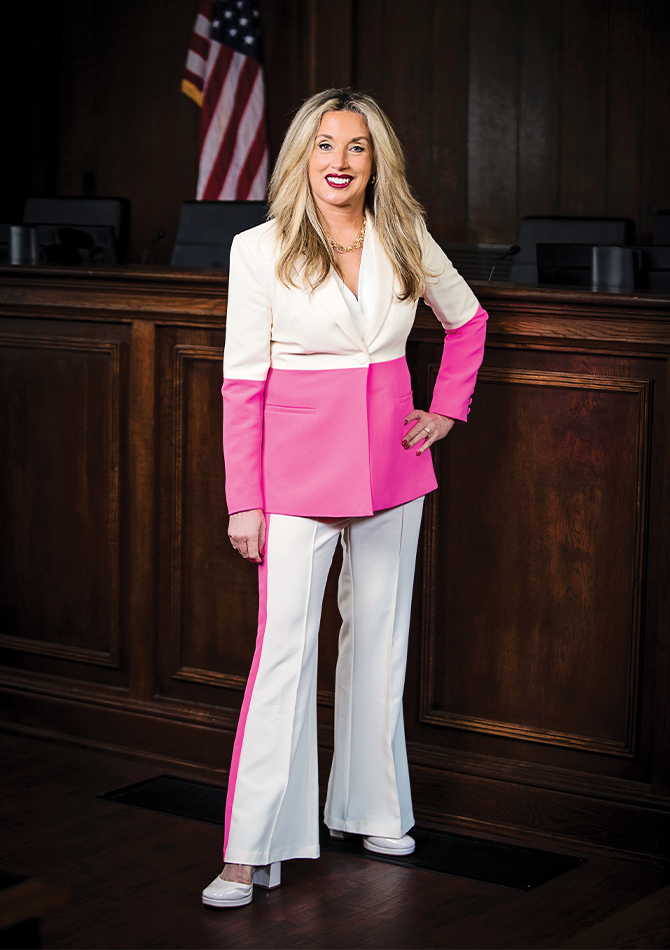 Government and policy were always of interest to Judge Angela McCormick Bisig. As a member of student government in high school and a political science major in college, she was primed for her current position. Learning about the Supreme Court and the Justices, as well as major cases, got her excited about becoming a part of the judicial system. The University of Louisville graduate eventually assumed office as a judge of the Kentucky 30th Circuit Court in 2013 and is now a judge of the Kentucky Supreme Court 4th District.

After being a lawyer for nearly 14 years and a judge for 20, she says one of the best parts of her job is being able to take all the skills she’s developed over the decades to try to improve the system and help people. “If I can feel like I’ve made the right thing happen and helped people when they need it, that can be rewarding,” she says. “I hope that if you ask people that have appeared in front of me over the years, they would say that I’m fair-minded and worked hard on their cases. That’s the most important thing about my career.”

She adds that though women are still woefully underrepresented in government positions throughout the country, she’s excited to see so many women stepping up and getting involved here in the Bluegrass — and she hopes it will lead to more balanced representation. “The best goal is [to] see everybody in our community represented in our government,” she says. 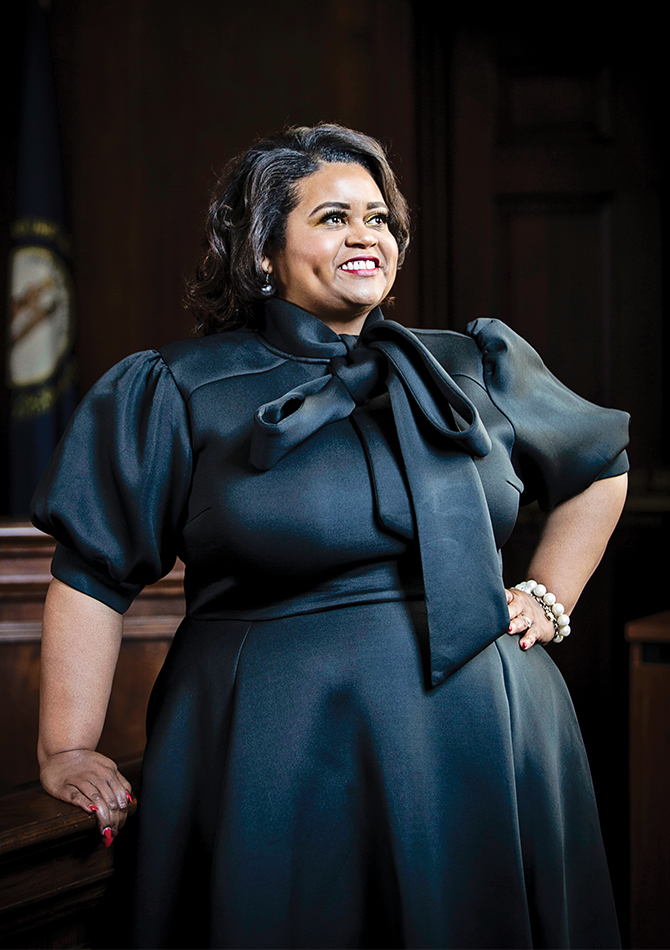 Pikeville High School alumna Josephine Buckner says it took her nearly a decade to realize she wanted to go into law. Though she’d joined a pre-law club while at the University of Louisville, the idea of being a lawyer didn’t quite take hold until she had earned her Bachelor of Arts degree in English literature and was working at a bank. It was there that she met a group of lawyers and decided to pursue her Juris Doctor from Northern Kentucky University Salmon P. Chase College of Law.

She has now been practicing law for 18 years; she says it was around year two that she began thinking she could one day excel at being a judge. About 16 years later, Judge Buckner made that dream a reality. She was appointed by Governor Andy Beshear in August 2021, won her first election in November 2022, and is a member of the Bar in both Kentucky and Georgia.

Judge Buckner says the best part of what she does is knowing the community trusts her to be a representative for Louisville, Jefferson County, and the Commonwealth of Kentucky. “For the community to have confidence that I can follow the law, make good and fair decisions, and be impartial means a lot to me,” she says.

Judge Buckner adds that national trends indicate it’s women who are deciding which way they want the country to go. “If women continue to pay attention and to use their voices — not only sharing on social media or with family and friends — but actually voting,” she says, “it will continue to trend.” 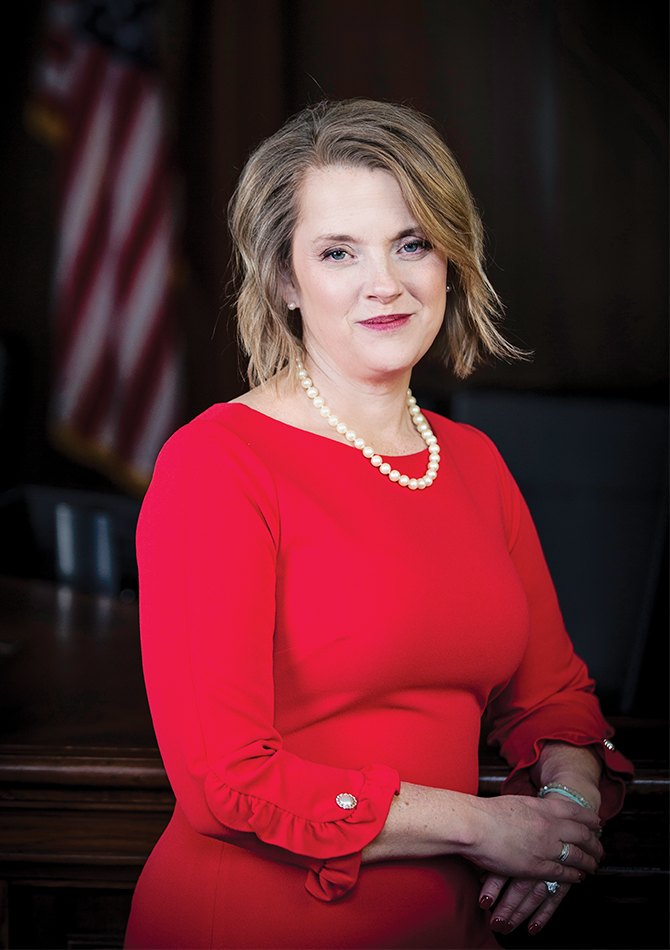 Growing up in rural Ohio, Stephanie Pearce Burke paid close attention to the things her mother did. “I always saw her doing lots of public service work and … being an advocate for everyone,” she recalls. “I knew that … something that served the public would be what I would do.”

Her mother’s influence and an appreciation for politics led to her involvement with mock trials while pursuing an undergraduate degree at Ohio Northern University. Despite a debilitating fear of public speaking, Judge Burke excelled — she earned her Juris Doctor and practiced law for 17 years before being elected to judge. In 2005, she was named one of Louisville’s Top Trial Attorneys Under 40 by Louisville Magazine, and Judge of the Year by Louisville Bar Association in 2018.

While running her practice, Judge Burke represented many people who were poor, mentally ill, or suffering from substance abuse disorders. “I wanted to be a judge,” she says, “because I felt like the deck was stacked against the people I was representing. Almost all of the judges on the bench were prosecutors and people who didn’t always act like they understood the plight of the people I represented.”

Judge Burke says the pinnacle of her career was being a key advocate for House Bill 127, which Governor Andy Beshear signed in June 2022. The bill allows courts to order outpatient care for individuals with several mental illnesses. “Changing how we treat a whole population on a such a grand level is … really important,” she says. Judge Tracy Davis knew she wanted to be a lawyer since she was five years old. Giving birth to her first child on the first day of her senior year at DuPont Manual High School changed her life — but it did not change her goals. Her parents instilled in her the importance of education; they stressed that knowledge is the one thing that can never be taken away from a person, and that anything is possible with an education.

After graduating from high school, Judge Davis went on to earn a Bachelor’s degree in finance and a Juris Doctor from Northern Kentucky University Salmon P. Chase College of Law.

“I had professors and mentors … that looked at me and my skillset, and [would say I was] made for the courtroom,” she recalls. She adds that as a minority and a woman, she was always mindful of legislation because it usually had a direct impact on her life. She found herself constantly arguing and fighting for fairness and realized that if she really wanted to do something to help people, she’d have to take the next step in her career. “So, I put my hat in,” she says. “I decided that I was made for this.”

Judge Davis defeated Mary Shaw in the race for Circuit Court Judge, District 30, 5th Division, in November 2022. The race was one community members were highly vested in as Judge Shaw is notably the judge who signed the falsified warrant which led to the raid of Breonna Taylor’s apartment and her subsequent death. After beating Shaw by 2,367 votes, Judge Davis steps into her position in the Circuit Court on January 2, 2023.

The influx of women judges, she says, indicates that the community trusts women. “It shows how far we’ve come as a nation [in regard to] equity,” she explains. “Whether you’re cisgender, female, trans, or whatever the case may be, I think it goes to show that we all have a voice.” Lexington native Karen Faulkner has always wanted to help people in the community. After earning her Bachelor’s degree in English language and literature from the University of Louisville and her Juris Doctor from the Louis D. Brandeis School of Law at the University of Louisville, she spent six and a half years working at the public defender’s office before starting a private practice with her best friend.

While working in law for 17 years, Judge Faulkner desired to be in a position where she could affect change. Now that she’s a judge, she says, she is finally able to make an impact in a significant way. “That’s why I decided it was very important for me to pursue this, and make sure that someone with my perspective and background was on the bench,” she says.

Judge Faulkner feels that being a judge is a huge responsibility and honor — and she doesn’t take it lightly. “The journey to become a judge has been a family affair,” she says, explaining that she wouldn’t be able to do what she does without the support and love of her husband and children.

She adds that after a long history of the bench being all white and all male, the influx of women and women of color is amazing. Having people of different backgrounds and sexual orientations is extremely important as well, she says, and the fact that there are now more women on the bench is a sign of a need for change within the system. 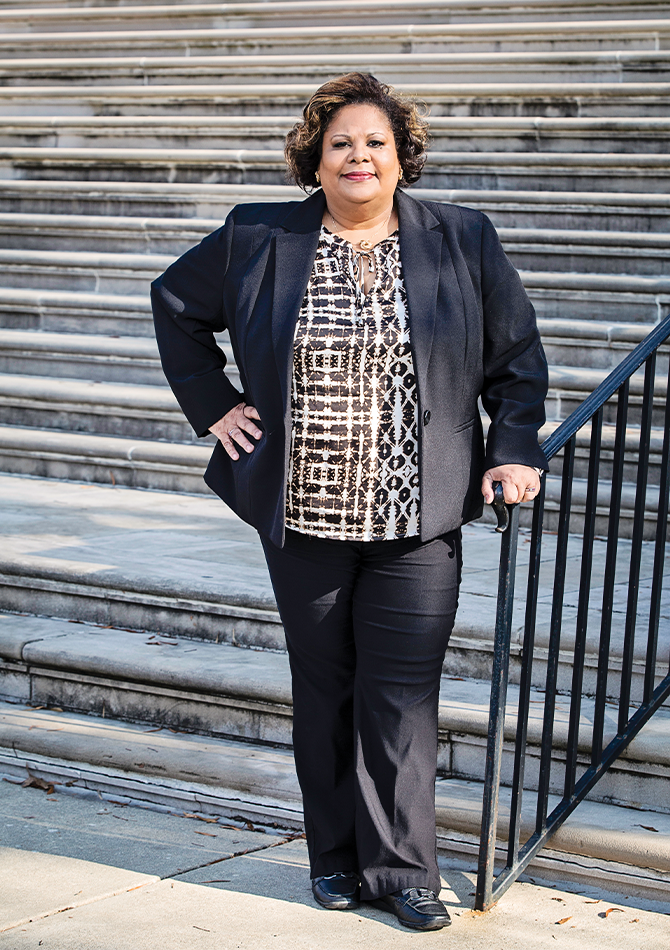 After obtaining an accounting degree, Lisa Langford moved to Indiana, auditing livestock yards and packing plants. A city girl at heart, she knew she’d eventually get back to Louisville. Three years later, Judge Langford gave birth to her first child and returned home to be with family. She and her aunt decided to attend law school together, and soon enough, she obtained her Juris Doctor from the Louis D. Brandeis School of Law at the University of Louisville. After working as a prosecutor for 14 years, she assumed office as a judge in 2019.

“I grew up in Prospect and was fortunate enough to have a very good life [and] educated parents,” she says, “but being a woman of color, I was kind of always the only one in the room that looked like me.” There were things that she wanted to change; things she wanted to do to help make the world a good and fair place for everyone. “It sounds cliché, but I always wanted to make a difference,” she says.

She appreciates the fact that her job allows her to help people — not just victims of crime, but also defendants who need help, as well as those who have been in a cycle of poverty, homelessness, mental illness, or domestic violence. “I am a very spiritual person, and I believe that this is a calling,” she says. 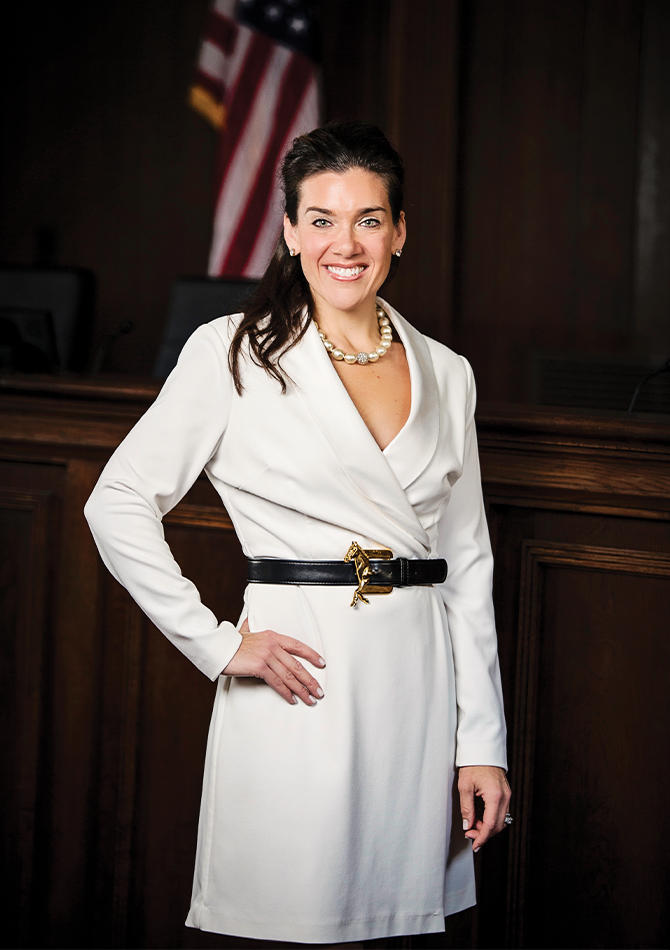 Judge Jessica Moore once had dreams of becoming a surgeon. “I took college-level chemistry, and that totally squashed that idea,” she says with a laugh. But Judge Moore knew she wanted to pursue an advanced degree, and her passion for reading, writing, and public speaking led her down the law school route.

She began working as a staff attorney in family court immediately upon graduating from the Louis D. Brandeis School of Law at the University of Louisville. Since then, the idea of one day becoming a judge was always in the back of her mind. Years later, she began the appointment process — while nine months pregnant. Three days before her scheduled interview with the judicial nomination commission, she went into labor. After a phone interview from the hospital — likely a first for everyone involved — Jessica was chosen as a finalist and eventually selected for the position. Since her appointment in 2017, she has been unopposed in every election cycle.

“I love my job,” she exclaims. “I [enjoy] every minute of every day. … I love being able to work with other people to be a problem solver, and [helping] explain the legal system to make sure people feel as if they are heard with respect when they come before the court.”

She adds that she has always had wonderful female mentors and feels lucky to have had women to look up to, both in the legal field as well as in other professions. “I’m definitely in support of women and women having a seat at the table in every profession,” she says, “[and] I think we give a good voice to law.”