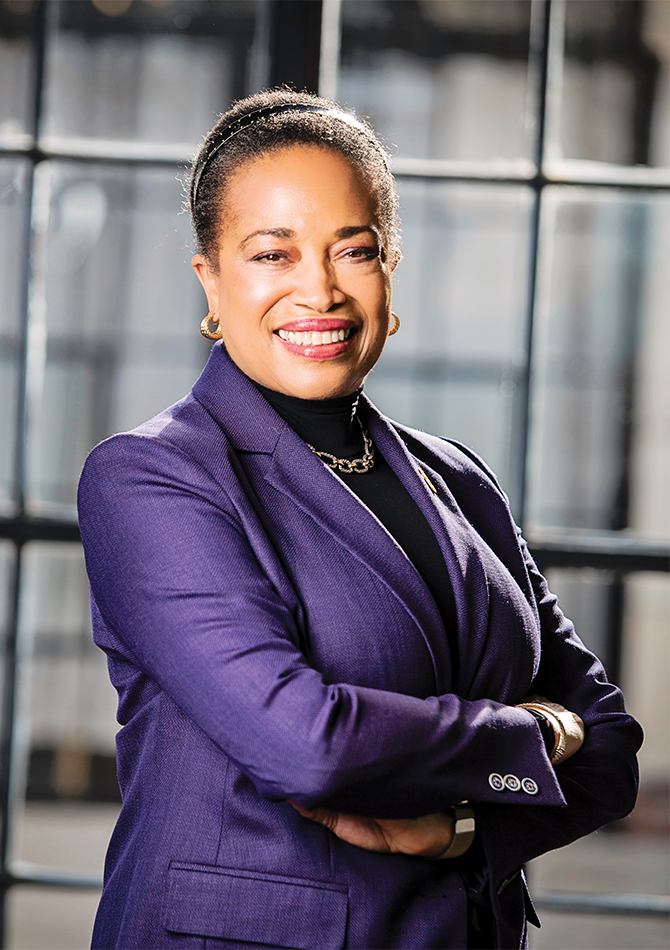 Joanne Harrell, incoming First Lady of Seattle and former Microsoft executive, visited Louisville last month as part of Microsoft’s recent New Future of Work initiative, which she helped to bring to our city. During her visit, she served as a special guest of the RockIt Women Conference, which brings women from every level in technology together to connect, educate, and inspire. There, Joanne caught up with Today’s Woman Publisher Tawana Bain for a candid conversation about maintaining the ever-elusive work/life balance and what love has to do with it.

A graduate of Columbia University, the Stanford Advanced Management College, and the Harvard Business School, Joanne earned her B.A. and M.B.A. from the University of Washington. In 2014, she completed the Corporate Citizenship Leadership Academy at the Boston College Carroll School of Management. Across a decades-long career, she earned and held major titles at AT&T and Microsoft. She’s been officially recognized as a Woman of Influence by the Puget Sound Business Journal and as a Woman of Impact by the International Women’s Forum. She also received the MLK “Vision of the Mountaintop” Award presented by a coalition of Seattle business, civic, and spiritual leaders. Her insights on how to pursue a powerhouse career, contribute to your community and still be there for your family formed the framework for a fascinating conversation with Tawana Bain.

TB: You started with the Bell Company, also known as AT&T. What was that journey like, and where did you land after being there for a while?

JH: I worked for the Bell system for about 19 years. I started right after college. My first job was as a statistician. When I left, I was their President of the state of Nebraska, requiring my husband and me to relocate there from Seattle. We were there for a couple of years when he told me there were some things he wanted to do back home, but he also wanted to stay there with me as long as I needed to figure it all out. And so I decided to go back home. I went into the nonprofit world and became President and CEO of United Way of King County in Seattle. From there, I was recruited into Microsoft, where I was for 20 years.

TB: That is so impressive. Ladies, find a man that will follow you somewhere. That’s when you know he’s a keeper. I love that he gave you the opportunity to build your brand. Let’s talk about where you landed with Microsoft because it is pretty impressive.

JH: So my last job was that was senior director for AI, Sustainability, and Market Development for the United States.

TB: Technology is a space where there need to be more women in general. And not only being the only female, I also have to believe that there were times in your career, especially in tech at Microsoft, when you were the only Black woman in the room.

JH: Oh, my goodness, yes. At the level that I was at when I left, according to Forbes magazine, women were 6.67% of the total number of people in that field. And so when you think about Black women, we were probably under 1%. We all knew each other. And after being there for so long, you fortunately and unfortunately get used to it. But then, on the flip side, when we come into the space as women and women of color, there’s a natural bond that we all worked to nurture.

‘‘It is hard to have it all. And it’s even harder to have it all at the same time. And the beautiful thing is that life is long if we’re lucky. And there may be things you can do at one point that you can’t do at another and vice versa. We have to think about how we want to design our lives.’’

TB: I love that. Because sometimes, women are not forming those bonds, and they’re not nurturing each other, and so we love to celebrate the women that do. Reading your bio, I was so so very inspired. You’ve been married to this amazing husband for over 30 years. You have each other’s backs, and you’ve raised exceptional children who are doing amazing things and making you proud. Some say we can never have it all, but you’ve been very blessed. How were you able to navigate being a mom, a wife, and have this remarkable career?

JH: Well, that’s a good question. And it is hard to have it all. And it’s even harder to have it all at the same time. And the beautiful thing is that life is long if we’re lucky. And there may be things you can do at one point that you can’t do at another and vice versa. We have to think about how we want to design our lives.

My husband is biracial. He’s half Japanese and half African American. My mother-in-law was this tiny Japanese woman who was the revenue director for the city of Seattle library system, and she retired to help us with our children. When we moved for the Bell system, she came with us. She was there, giving us the support that we needed.

TB: Women oftentimes don’t say yes to help. I think a big part of your story is saying yes to your mother-in-law. Ladies, let’s be honest; we don’t always want the mother-in-law in our home. But you needed her. She helped. She was an anchor. It is so important that we accept the help when it is there.

JH: That’s a good point about daughters-in-law and mothers-in-law. Mine, she’s gone now, but she loved her baby. And I could see that and intentionally said, well, that’s fine. I love him, too. Those kinds of loves don’t have to interfere with each other. And so it was easy for me to give her what she wanted while getting what I wanted. And it worked out.

My family– my sister, my brothers, that whole extended community was also there. And so, as women, we have to think about what the support systems look like, especially if we’re also working. There were some times when there were things that I couldn’t do. There were some birthdays that I missed.

But you find that people, even with children, if they understand that you’re not here today, but you will be here tomorrow, it’s alright. And if they know that you love them over a lifetime and are committed and very focused on what’s important to them, it comes together. I’m very close to all of my children now.

My husband and I have a good partnership. It takes a lot of intentionality and a lot of planning. My kids learned very early that if you want your mother to do something, you must put it on the calendar.

When my daughter was in college, she told me there were times when she was growing up that she was mad at me because I had to work or this or that. But she told me that she understands it now, and it’s all good.

TB: For us to help make the world go round, we have to balance. You’ve had a fantastic run with your career and still doing some amazing things in the community. Speak to the women reading who may have a husband who is some high-ranking executive in a corporation or maybe even a politician. How does she ensure she doesn’t get lost in his shadow?

JH: So there’s a lot in that, and my story is unique. As I said, my husband moved with me. There was never a question. I’m a tit-for-tat kind of person. You do me good. And I will do you good. And I’ve always remembered that, and it affects everything. Through the years, there were times when he was the trailing spouse. So now I look at him, and I’m glad he’s living his best life. Not just for him but for our community. He’s the best person to be mayor. All the polls showed that before he decided to run.

I’ve had a great career. I have a great name, right? I can do whatever I want to do. In my community, I have very good access to everyone. I ride for the brand. I’m just proud of him. I’m happy for him. I love him. I’m truly happy, and it’s the same for our children. Whatever they do is solid and creative. It comes together.

So I don’t even think about being overshadowed, I don’t see the world that way, but I understand that women might feel that. Each of us loves differently. To me, love looks like supporting me, helping me having compassion for me. And that’s what I tried to give back. What love looks like to me is wanting your partner to live their best life. Just like we want to live our best lives.

TB: I love it. So good. And I also love the fact that you brought two cultures together. And you can only really do that when you have proximity to the other’s culture. And so kudos to you, two, for not just being able to support one another but still accomplishing things on your own and being supported.

So what’s next for you?

JH: Well, the most important thing to me is that Seattle itself thrives. I’m joined in a consortium of folks who are very focused on the Seattle brand across a number of elements. Stay tuned; you’ll hear good things from our city. And I am also glad to be here in Louisville. It’s a completely different community, but similar in that there’s a focus on compassion and love here. I think it is just incredibly unique. Thank you!

TB: Thank you so much.

This transcript has been edited for clarity and length.