Queens Of The Derby

Queens Of The Derby 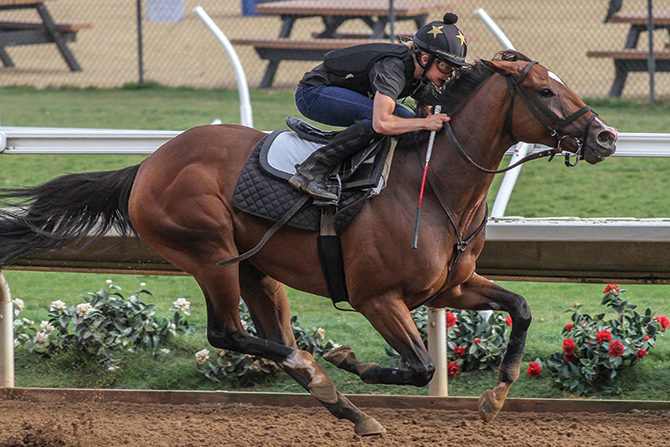 Meet three women who are claiming their rightful place in the horse racing industry. They are breaking barriers and rewriting the history of this sport.

Horse racing is a challenging and arduous industry to make a living, let alone find success. Each day starts before the sun rises and is heavy with physical labor. It takes a strong arm and a strong mind to navigate the business and keep proving yourself one race at a time. Without a level of commitment and passion, few can endure it day-in and day-out seven days a week. The fairy tale dreams of a horse-crazed girl can be quickly dashed in this male-dominated sport, but much like any other industry, women are proving that success is not just what you’ve done, but what you can overcome.

Ferrin Peterson is proof that no dream is unattainable so long as you are willing to work for it. The 29-year-old California native who recently made Lexington, Kentucky her home, is a professional jockey and a practicing veterinarian. On days she rides, she works horses in the morning and races in the afternoon at Turfway Park in Florence, Kentucky. On days she doesn’t, she assists in surgery at one of Lexington’s equine hospitals or visits her horse patients at nearby farms.

“Why do I have to choose,” Ferrin questioned when doubters challenged her ability to juggle two demanding careers. “I have two passions and luckily they both go together.”

Ferrin grew up riding horses and dreamed of one day becoming a jockey. She decided to pursue veterinary school to get closer to the racehorses she loved. While attending the UC Davis Veterinary Medicine program, she worked on a nearby Thoroughbred farm, caring for the babies, helping prepare them to be ridden and later galloping them. She took out her riding license while in her second year of veterinary school and skipped in-person class lectures to gallop horses in the morning at Golden Gate Fields. She attended labs in the afternoon and finished her long day listening to recordings of the class lectures she had missed. By the time she graduated vet school, Peterson was working as a professional jockey.

“I had really supportive parents that always made me confident at a young age, and I think having that confidence gives you the backbone that when someone much older than you, in authority, tells you that you can’t do something, it doesn’t make you quit,” Ferrin says.

Since she began riding professionally in 2018, she has amassed earnings of nearly $3 million and ridden in over 880 races. She recently obtained a license to practice veterinary medicine in Kentucky and plans to take her jockey skills to the Kentucky racing circuit where she’ll ride with some of the country’s top jockeys during the Keeneland and Churchill Downs racing meets. Whether she’s on the track or off, you can bet Ferrin will make the most of every opportunity.

“We’re not limited to what people tell us we’re capable of doing.” 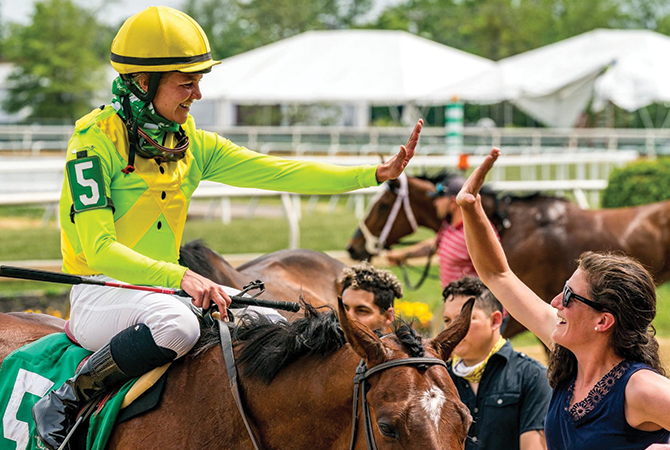 Ferrin Peterson grew up riding horses and dreamed of one day becoming a jockey. “I had really supportive parents that always made me confident at a young age, and I think having that confidence gives you the backbone that when someone much older than you, in authority, tells you that you can’t do something, it doesn’t make you quit,” she says.

Trainer Michelle Lovell has dipped her toe in nearly every aspect of horse racing: from breaking babies at Dogwood Stable in Georgia right out of high school, to competing as a jockey in Miami for six years, to a nearly 20-year career as a trainer. In addition to managing a barn of 20 horses, the Florida native turned Louisville resident also breeds and owns racehorses, proving that there is nothing in the industry she can’t do.

“Doors always open and I just go through them if it’s something I want to do,” she says.

The racing industry requires more than talent and a passion for horses, particularly if you’re a woman. During her time as a jockey in the 1990’s, an incident with a male rider forced Michelle to leave the sport. She pursued an opportunity as a minority owner in an Oregon coffee shop and spent the next five years pouring coffee and dabbling in photography before returning to horses.

“The love of horses brought me back to racing,” she says, but it was some owners she rode for in Texas that started her toward a future as a trainer when injury ended her riding career for good.

Using her skills as a rider and early experiences with horses on the farm, Michelle found success quickly as a trainer. In a business that tends to give men more opportunities to excel, Michelle’s patience to put the horse first and her persistence to get the most from the chances she’s been given has resulted in 525 wins in more than 3,100 career starts and $13.1 million in career earnings.

“Every woman in the business has to make her own way,” she says. “You can’t rest on your laurels and you can’t depend on someone else breaking down the doors for you.” 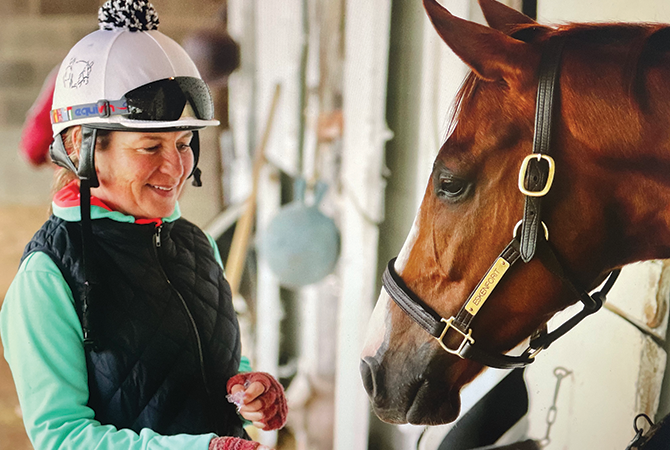 In addition to managing a barn of 20 horses, Michelle Lovell also breeds and owns racehorses. Photo by Mary Gant

You can often find Cristina Bahena at the barn of trainer Dale Romans, caring for and grooming some of the Louisville-based trainer’s best horses. It’s a 34-year friendship that began when the two were young and she took a job with Romans’ father, trainer Jerry Romans. It was 1988 and she was a single mother of two determined to make a better life for herself and her young daughters in the United States, even if it meant leaving them behind with family in their poor Mexican village.

Within months of first landing in Chicago and making her way to Kentucky, she was hotwalking horses for Jerry Romans. Her hard work and persistence convinced him to promote her to groom. She became the first woman in his barn to hold the job. Despite his stern reputation, Dale was good to her and the steady work allowed Cristina to eventually reunite with her children. She continued to work for the family as the barn transitioned from Jerry to his son Dale.

Cristina, now the barn foreman, is married to Baldemar Bahena, Romans’ assistant trainer, and is working to put the pair’s two youngest children through college. She’s lived the American Dream with the Romans barn and has seen its great successes with horses like Preakness winner Shackleford and Keen Ice, who beat Triple Crown winner American Pharoah in the Travers Stakes. She even inspired one of Dale’s owners to name a horse in her honor, Cristina’s Journey, that won the Pocahontas Stakes in 2014.

“Everything turned out different for me,” she says. “I had more chances for my family.” 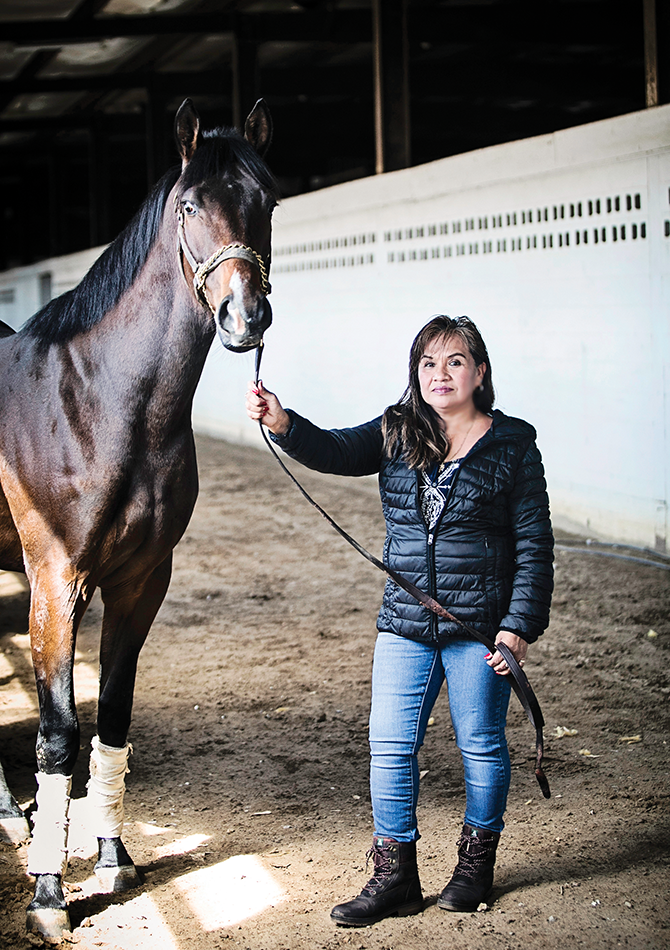 Within months of making her way to Kentucky, Cristina Bahena was hotwalking horses for Jerry Romans. Photo by Kylene White