Local Rapper Dave.Will.Chris Reflects on His Journey as an Artist

Local Rapper Dave.Will.Chris Reflects on His Journey as an Artist 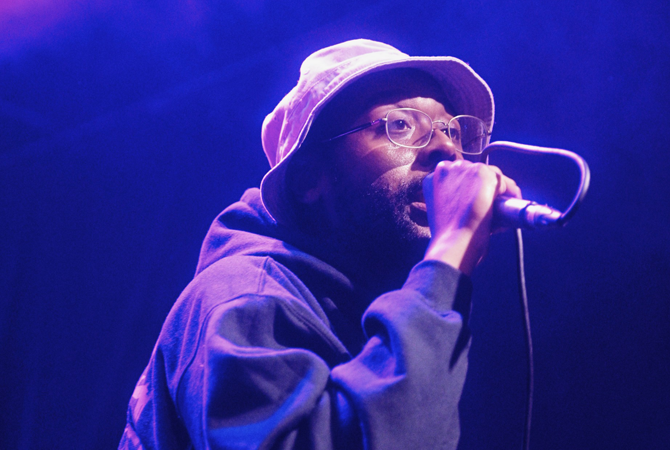 Written by Jasmine Christopher, Contributor | Photographed by Malcolm A. Taylor

White lights, smoke fog, and roaring guitar intensify the feeling in the room. Silence falls over the crowd as they take the music in, watching in awe.

Out The Plastic was held at Headliners Music Hall on Oct. 8 at 7 pm. The show featured Kuana Evans, Axel Roley, Allen Vice, Q Mekhi, BP The GassGuy, that’s crazy inc., and the headliner of the night, Dave.Will.Chris.

Born in Kokomo, Ind., Dave.Will.Chris, formally known as Dave Christopher Jr., was raised in Gary, Ind., until moving to Louisville, Ky., with his father at age 11. Despite not being born in Louisville, he believes the city made him the man he is today.

Dave can recall his early days as a rap fan. He thought MC Hammer was the coolest rapper ever, and he was even a fan of Billy Ray Cyrus. “Achy Breaky Heart” that was my jam right there.”

As time went on, he grew into his musical taste, and he really appreciated the famous rappers from the late 80s and 90s.

But when he made his way through middle school and high school, his taste in music shifted again. He began to look for more underground rappers.

“It started as me like kinda just writing poetry, and then that kind of evolved into me really rapping.” Many people believe that Rap

“Holding a rhythm and finding beats, and you know, making a beat or whatever it might be. Around 12 or 13 was when I really started rapping for real.” He shared his dream of becoming a rapper, and shortly after, he had his mini studio built into the basement of his home.

In his early days, he took inspiration from rappers like Tupac, Snoop Dogg, Eminem, and Jay-Z. He covered the walls of his bedroom with all these rappers, making it known who he listened to and who he was a fan of.

He began to listen to artists in Louisville by connecting with a friend from school named Jordan Saffel. “He’s probably the person that put me on to a lot of stuff. Dave credits Saffel with helping him find his taste and musical style.

Saffel knew local artists at that time, such as GoodBar, and Skyscraper Stereo, Chaotic D, and Brix the Franchise. Dave then went off the college and discovered James Lindsey, formerly Jalen Rose, on a popular blog called 2DopeBoyz.com.

Dave watched and admired people like D Fresh, B Simz, HurraSeason, and more. Seeing these Louisville artists thrive encouraged him to take rapping seriously.  He remembers seeing these people perform at Headliners and thinking, “Oh my God, how can I get up there?”

Performing with several up & coming artists at Headliners this past month was truly a full-circle moment. He knew that having the ability to get up on a stage that he had dreamed of being on was so much bigger than himself, which is why he chose to highlight the current rap scene.

“My generation of rappers had a better opportunity to do some stuff,” Dave said. He stands in between two influential groups, those that had to build their table and those that have to pull up a seat. “They’re [younger artists on the scene] the next ones up, I’m not saying it’s over for cats my age, but like, dudes like shy!!!, Allen Vice, AD Kindle, Nise the Nymph, all them? They’re set.”

“I really see that community with them,” Dave said.

Dave says one of the most notable differences between the generations is that the newer artists are genuinely friends who have built a relationship outside of just the music.

“They’re actually friends; they’ve been knowing each other.”

LouiEvolve featured artists such as Jack Harlow, The Homies, and Marz. It created a space for locals to experience the talent that lived in their hometown that they hadn’t even known existed.

LouiEvolve even allowed students from AMPED in 2015, a community center and music academy located in West Louisville, to perform. For many of them, it was a chance to perform and showcase their talent for the first time.

Now, Dave serves as the program director of AMPED, which gives him a platform to show his love of supporting other musicians doesn’t stop with setting up shows.

“I do teach music, I do teach classes, but really I’m here for them,” he said. Dave is also an instructor at the program and views himself, loosely, as a youth advocate. “The biggest thing for me has been building those relationships and really getting to know them and realizing they need somebody to talk to.”

The goal at AMPED is not just to teach kids music but to use music as an “unconventional setting” for personal growth.

“It’s so lonely as a kid, I mean elementary, middle, and high school, up until you’re 20, that’s a lonely space to be in,” he said. Many students at AMPED have entered the program to learn an instrument, but they left with a whole new set of skills and a support system stronger than they’ve had before.

“It’s something that worked for me in terms of dealing with my emotions and who I am,” Dave said. Music is what gets the kids in the door, and Dave shares his passion for it with the kids because he knows it will work. “I try to make that message known in my music like ‘just be you.’”

“This latest project… it’s about love on the surface, but it’s about ‘yo, I’m choosing to feel different’ it’s still some darker things, but I’m trying to be positive. I’m trying to find a new angle.”

Dave.Will.Chris released his second album, “U Almost Grew On Me,” on Apr 15. His music can be found on all streaming platforms.