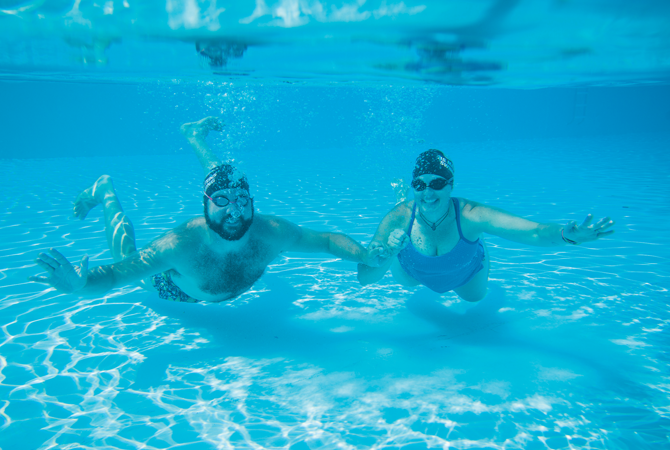 William Kolb and Amy Benton and the co-founders of Central Adult Learn-to-Swim, Inc.

Does the idea of taking swim lessons make your palms drip with sweat? William Kolb and Amy Benton, the co-founders of Central Adult Learn-to-Swim, Inc. are ready to calm your fears and debunk the misperceptions.

I thought swimming would be the death of me — literally.

As a child, I struggled with getting into a pool without wincing from anxiety, but my cousin Marlana couldn’t wait to take a dive. I marveled at her ability to swim well and wished I could do the same, but I couldn’t get past the fear — and I wasn’t willing to learn how. Whenever I spent a weekend with her, we would go to the pool located in the apartment complex where she lived. I remember drowning in anxiety (pun intended!) every time she suggested I venture into the deeper end. Instead, I stayed on the shallow end feeling safer but secretly wishing I could swim.

At the age of 25, I signed up for a swim class at the YMCA, but I didn’t want to put my head in the water and — though I know it sounds vain and unreasonable — I didn’t want to mess up my hair. So, after the first class, I didn’t return. I needed cheerleaders like William and Amy, the co-founders of Central Adult Learn-to-Swim, Inc. They are turning people like me into great swimmers.

Their nonprofit organization, which opened in April 2018, provides free swimming lessons for adults. They offer classes at Central High School, the Academy at Shawnee and they have partnered with Louisville Metro Parks to use their pool located in Algonquin Park. Learning to swim as an adult can be an intimidating experience, and most swimming curriculums are tailored to kids. However, Central Adult Learn-to-Swim, Inc., uses a curriculum created by U.S. Masters Swimming which is specifically designed for adults. “It is designed to focus on the fear and past trauma that has kept an adult from learning to swim,” William says. 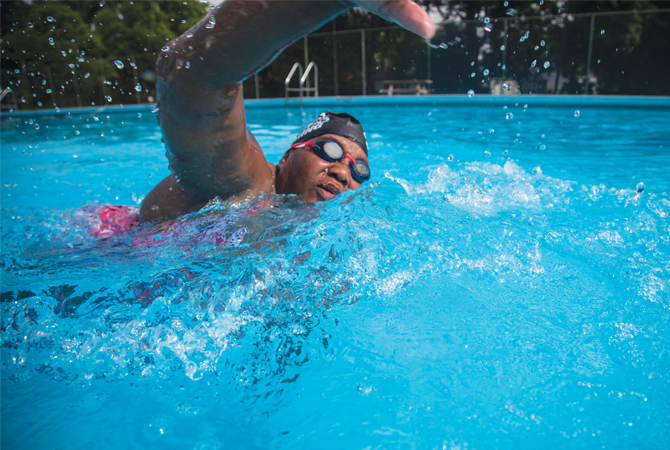 Venice Jones is a graduate of the program and participates in the Aqua Zumba classes.

Diving in to help

The idea for starting the nonprofit came from an encounter Amy had with an 18-year-old named Troy who wanted to learn swimming. Amy gave him lessons but was astonished to learn that no one in his family knew how to swim. Troy, who lived in West Louisville, had no access to pools and said he had never been near a body of water.

Amy and William wanted to change this narrative. Using a $1,000 grant, they created free swim classes at Central High School and recruited volunteers to be swim instructors for the students.

Initially, they planned on this being a one-time class but had no idea it would turn into something much bigger. For their first – and what they thought would be their only class – they taught 40 people how to swim in 16 hours. And this was just the beginning.  ”We were hearing from our graduates that their lives were changed in four hours, and they couldn’t believe that the pool we were using at Central High School would not be available for them to use in the future,” William says.

When the demand for their swim classes skyrocketed, and they realized they had a waiting list of eager adult students willing to take the plunge, they quickly began working on a plan for turning this grand idea into a year-round program. Through financial support from fellow swimmers in the community, they were able to continue the program. “There are a lot of people who grew up swimming and they recognize the privilege that comes with having access to a pool and being good at swimming and being able to swim and if they have the wherewithal to contribute to our effort they will, and they do which is how we are able to pay for everything which is wonderful,” Amy says. Even after a student has graduated from the program, they can return to continue practicing under the supervision of a certified instructor and lifeguard. 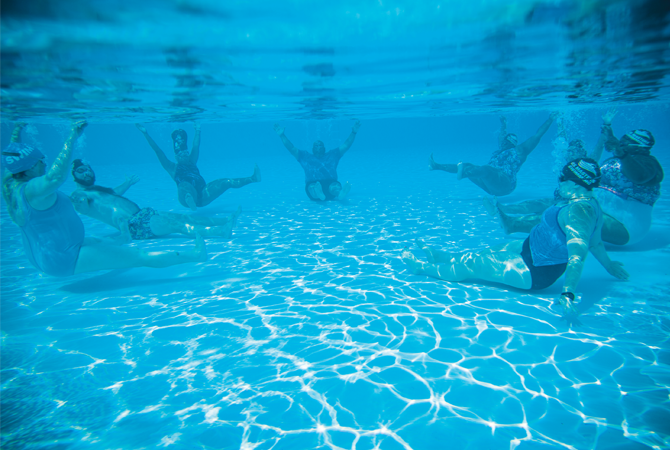 A therapy session in (and out of) the water

The organization has over 70 instructors who are master swimmers, retired teachers, social workers and therapists which is ideal for students who need extra emotional support to get them through their swim sessions.

They open the first class with every teacher and student answering the question ‘Who are you and why are you here?’ William says starting off this way helps the students become comfortable and less self-conscious about not knowing how to swim. “Sometimes we hear people say ‘I go on vacation a lot and love the water, and I am always at the beach, but I don’t go in past my waist. And then sometimes you’ll hear people say I almost died as a child in a swimming pool, or I know of someone who fell off a boat and didn’t live,’” he says. In the first class, the group practices breathing and relaxing on the deck then and they practice bobs, floating, kicking and pulling their arms while in the pool.

William says he is amazed with how quickly the students master the basics of swimming. “80% [of the class] does elementary freestyle in an hour. It is electric in the swimming pool. When everyone gets about 45 mins into the first lesson and people start to figure out all of those things at once and they swim for the first time, it is amazing. It is like a religious experience… the energy is like nothing I have ever experienced in my life,” he says.

They offer 4-6 hours of instruction and provide students with the option of taking four weekly sessions each month or doing four consecutive days of classes. Each session runs for an hour to an hour and 15 minutes. Currently, they have 1,200 people on their waiting list, but the good news is that students can take their Aqua Zumba class (cost, $5) taught by Debra Myers, one of their former students who graduated in 2018. Debra, who used to teach Aqua Zumba through Jefferson County Public Schools, says she decided to take swim lessons to learn the proper technique and get over her fear of swimming in deep water. She had a breakthrough moment in the class. “I told myself I had to get over this fear if I wanted to swim in deep water so I just started jumping in [the pool]. When I jumped in the first time, I said to myself, ‘I want to do it again.’ And when I did it a second time, I realized I could do this and that is when I got over the fear,” she says. Her newfound courage as a swimmer opened up a whole new world for her. “I feel more comfortable in the water. I can tread water now. I can hang out in the deep water.”

Pushing past the fear is the biggest hurdle for students overcome, but William and Amy reassure students that they are there to support them every step of the way — and they help them understand the connection between physiology and swimming. They work with students to make sure they are maintaining a constant airflow when they are in the water. “We tell people: ‘You wouldn’t hold your breath while doing the dishes and take big gasps in between breath holding. If you don’t do it on land, you shouldn’t do it in the water,’” he says. And if a student is having a tough time progressing in the class, the instructor will find ways of making them feel more comfortable. “If you won’t put your face into the water, we can at least give you a noodle and teach you how to get across the pool with a piece of equipment … we put a lot of heart into what happens in the swimming pool.” William says.

He adds, “One time I got a phone call from someone who signed up for our class. She said ‘I never showed up but I was there at the pool sitting in my car crying my eyes out and my body was locked up and I physically could not open my car door and walk inside.’ This woman was terrified. She was trying something new. She was wearing a bathing suit for the first time in 15 years and it all kind of hit her when she parked the car so we actually check the parking lot now. I am not above tapping on someone’s car window and starting a heart to heart right there.” 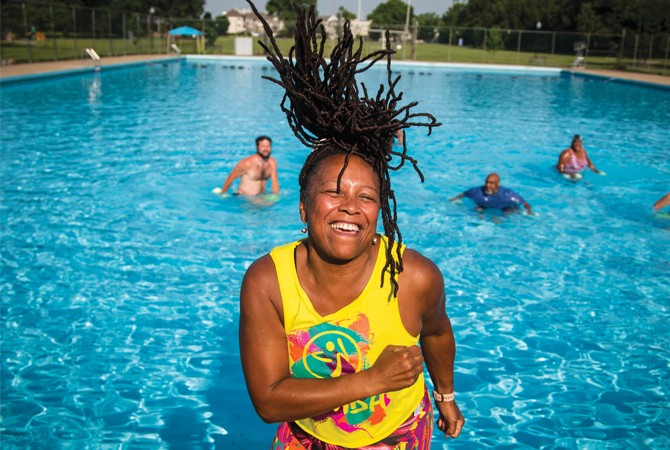 When Robin Alexander, a recent graduate, enrolled in the program, she didn’t expect to be accepted and says she wasn’t mentally prepared. But after 10 years of avoiding swim lessons, Robin couldn’t wait to take the class. “I was super excited. It was like Christmas. I tossed and turned the night before,” she says with a laugh. She admits that trusting the process was hard for her to do, but when she received her certificate of completion and a t-shirt, she describes the moment as being the “cherry on top.” She adds, “The encouragement of my classmates and instructors was over the top and this is a feeling no one can ever take away from me.” Since completing the program in April, Robin says she has less stress, more clarity and has developed new friendships. She participates in the Aqua Zumba class twice a week. “My confidence is through the roof. I feel like I can accomplish anything else that I set my mind to and I feel more confident when I travel,” she says.

After I listened to Robin’s story, I visualized myself swimming in a pool with people cheering me on. And for the first time in my life, I became interested in finding out whether I could truly learn to swim. The fear still lingers, but this time, I might be ready to let it float away. We’ll see.