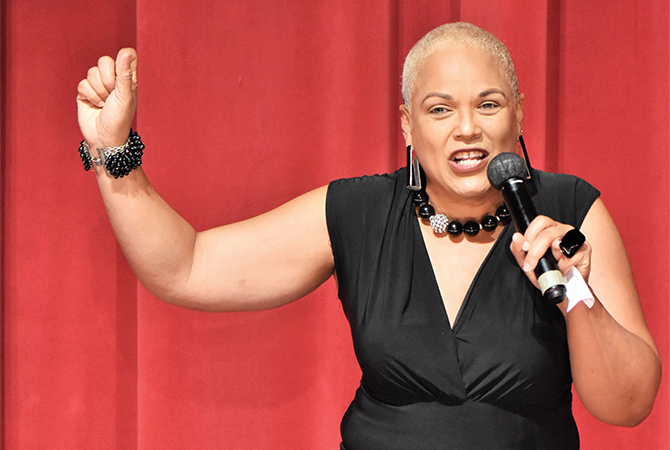 ‘The number one thing I can tell you is tell the truth…even if it hurts.’ – Best advice comedian Kim Vaughn ever received, and told to her by comic legend Whoopi Goldberg at a 1989 Derby season event.

Despite multiple traumas and her struggles with mental health, comedian Kim Vaughn finds healing in the power of the joke.

It is said that comedy is born out of pain and for a standup comedian, traumatic life experiences are the jetpack that fuels their craft. There couldn’t be anything more true when it comes to Kim Vaughn’s story and comedy career. Born with a wandering, blind eye (that was replaced with a prosthetic eye in 2021), the cruelty of her childhood classmates taught her how to tell a joke instead of constantly being the brunt of one. “From preschool, my eye had been how [I developed] the quick wit for my eventual stand up act,” she says.

By the time the Louisville native was in her teens, she was struggling with more than just the childhood bullying about the condition of her eye. Diagnosed with bipolar disorder at the age of 18, she was admitted for a 72 hour observation that turned into a three month stay at Central State Hospital, the adult psychiatric facility.

As a suicide, domestic and sexual abuse survivor, at the age of 22 she made the decision to flee her abusive relationship and relocate to Seattle (where she lived for eight years). It was a move that would set Kim on course with her comedic destiny. After 60 nonstop days of northwestern rain left her feeling depressed, in desperate need of a night out, Kim says she ended up at a local bar on open mic night and has since become a rising star on the stand up scene.

Her first real gig was at Tom Sobel’s The Caravan Comedy Club in Louisville in 2004. But it was becoming a semi-finalist on season three of the Nickelodeon show, America’s Funniest Mom, that has helped usher in more opportunities as she makes the rounds of the comedy club circuit around the country. With a sense of gratitude and humility in her voice the single mother of three says, “When you find your purpose it’s an incredible thing.”

“My testimony is ‘You CAN! You MUST!’ I want to be a vessel that shines a light on the mental health community especially within the Black community. It’s a hidden dark secret we as a culture can no longer hide.”

Known as the glamour girl of comedy, Kim routinely draws on her personal experiences to make her audiences laugh. In 2007, she had one half of one breast removed due to a rapidly growing tumor. She muses, “I looked like I was in a bad knife fight and should be in a biker gang rollin’ across America. I was finally able to have reconstructive surgery in 2018.”

It’s Kim’s transparency or, as she says, “the peeling off the layers of me like an onion,” that makes her a fan-favorite whenever she takes the stage. Whether she’s sharing funny, real life stories about her children, her dating life, or her struggles with mental health; she’s happy that she can own who she is and all that she has been through when she’s on the mic.  “Comedy allows [these subjects] to be visible and vocal. Can I say that I’m crazy? Absolutely. I love being crazy. I don’t want to be anything other than who I am.”

Kim says sharing such personal topics on stage is her way of helping others by being a beacon of laughter, healing and motivation. “My testimony is ‘You CAN! You MUST!’ ’’ she says referring to healing from one’s wounds. “I want to be a vessel that shines a light on the mental health community especially within the Black community. It’s a hidden dark secret we as a culture can no longer hide.”

To that end, in 2019 she became a certified Family Support Group Facilitator for the National Alliance on Mental Illness (NAMI). She’s got an even bigger goal in her purview – to become a national spokesperson for the organization. She’s already performed at their convention. “I call it going home,” she says. “A lot of times after my stand up shows I get people saying ‘thank you! You’re saying things I can’t say’ [about suffering from mental illness].”

Kim envisions when standing at the entrance to heaven’s gate, she will have left a blueprint behind that shows others that they can heal their wounds; be they domestic or sexual abuse, homelessness, cancer, or mental illness, Kim says “I want a footprint so the next Kim can say ‘Wow, I can do this too!”