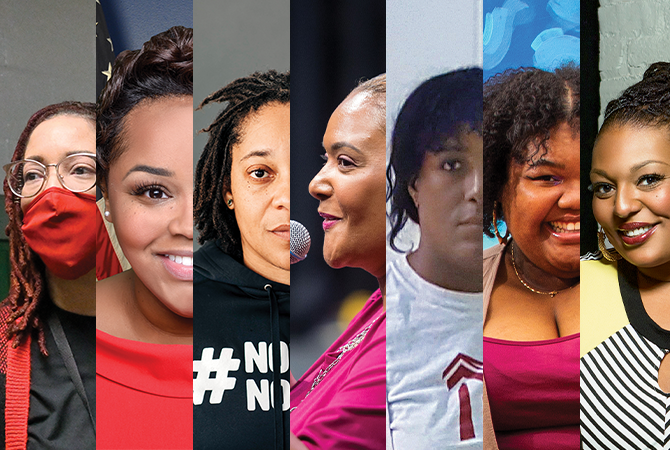 Don’t take your eyes off of these amazing women.

In honor of Black History Month, we are giving a nod to the Black women who are breaking down barriers, advocating for relevant change and setting the stage for the next generation to soar.

She wants to give student athletes the power to succeed in and outside of the classroom.

April Brooks has served in several key leadership roles in Jefferson County Public Schools — from principal to athletic director. But her new role beginning in January as Executive Director of Athletics & Activities for the district is the first ever position held by a Black woman.

At 40, this mother of three has accumulated over 17 years of experience as a teacher, coach, and administrator, but is looking forward to being back in the sports world. April ran track at Male and was a nationally ranked athlete during her time at the University of Kentucky. In her new role, she plans on creating fair and equitable practices, work to recruit more female athletes, and enhance elementary-level athletics to ensure healthy foundations for mind, body, and nutrition. She also plans to create a Backpack artifact that showcases students’ leadership abilities through athletics. “I want to push the envelope [of the student-athlete definition] and put the emphasis on the student first, athlete second.” April also plans to cultivate more community partnerships with JCPS athletics and work toward improving facilities across the district. 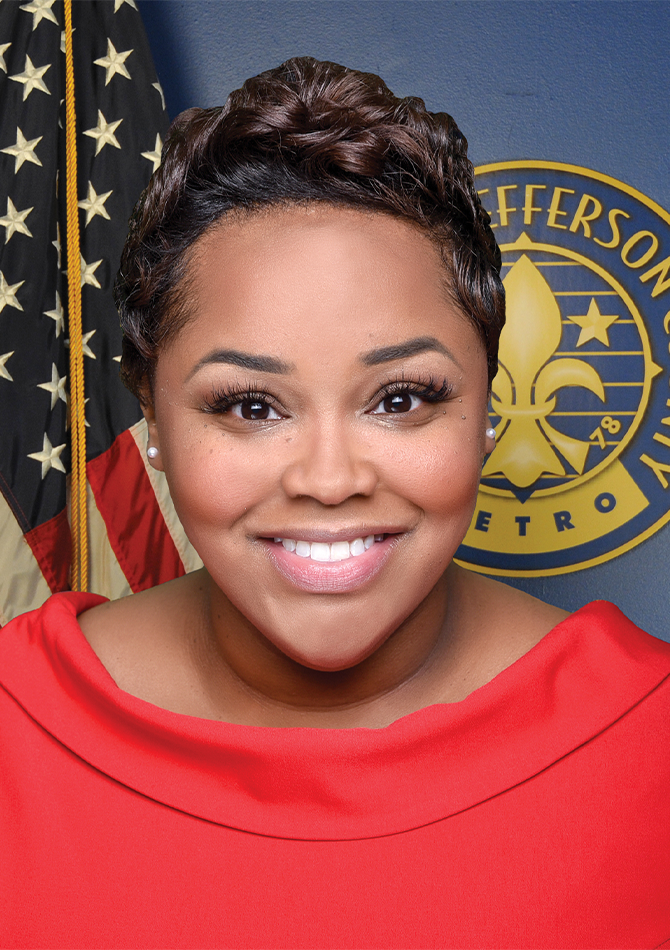 She puts her community first – every time.

As the Honorable Keisha Dorsey closes out the year, she has many accomplishments to mull over. Her policies have helped to bring her district (which covers Shively, south of Algonquin Parkway, and the Taylor-Berry areas) a quarter of a million dollars that was used to upgrade the Algonquin Pool and $100,000 that was used for lights, infrastructure and sidewalks to address crime prevention. She started district 3’s first newsletter and podcast. And since Keisha is dedicated to the area where she serves and lives in West Louisville, she has also purchased her first investment project there — a six-unit rental property. “I wanted to walk-the-walk,” Keisha says. “Many don’t see this area of town as an investment opportunity, so I want to be an example in an effort to address the lack of exposure for the area.”

But that’s not all. This well-rounded politician, classically trained musician, and biochemistry major, has transferred her skills in healthcare administration (her career prior to politics) to improvements in her personal and professional life. For her district, she was able to bring Louisville’s first Covid vaccine clinic, circumnavigating the bureaucracy with her health admin experience.

Keisha will be working on her reelection campaign, two patents in info/technology and physical utility, hopes to purchase an additional investment property in District 3, and is closing out a $50,000 grant with the CEO of Fund for the Arts that will make arts accessible to all District 3 constituents by providing two free tickets to any Louisville arts event. “I don’t think arts are a luxury, they are a cultural necessity,” Keisha says. 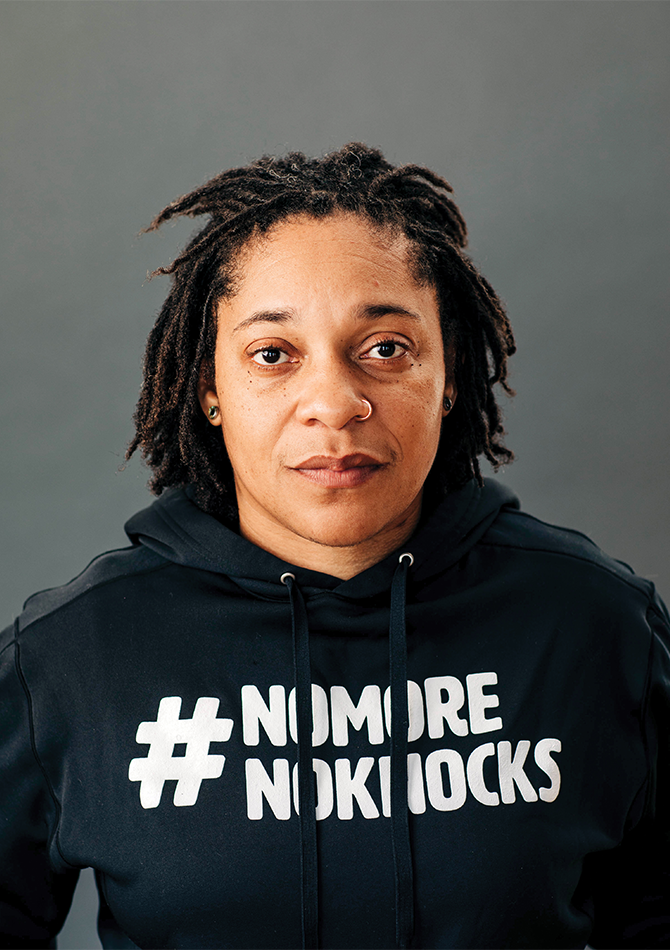 Advocating for people in need is her mission.

While change-maker and social advocate Keturah Herron, 41, has dedicated over 15 years to social justice policies, this year truly solidified her legacy. In the wake of Breonna Taylor’s murder and Louisville’s ensuing racial justice protests this summer, Keturah played a key role in engaging community members, drafting, campaigning for, and securing the passage of Breonna’s Law. This law forever bans Louisville Metro Police from conducting no-knock warrants and it is being used as a precedent throughout the U.S. “It is one of the few tangible changes we have been able to see after this tragic event,” Keturah says.

Before 2020, Keturah’s work focused on social services that addressed the effects of parental incarceration, the school to prison pipeline, and the disproportionality of minorities in the criminal justice system. “I was proud of the work I did for individuals and families, but now the scope of my policy work has broadened so that I can help thousands–before I helped individual families.”

Big things are on the horizon for Keturah. “The last two years were very heavy for the world; they were hard on me, too. Next year I want to engage in work that touches my soul at its center,” Keturah says. She will be transitioning from the American Civil Liberties Union and will focus on her own spiritual healing–an act she says we will be able to see carried over to her professional work. She will travel across the state and engage in conversations about our diverse needs. Recently, she enjoyed engaging Kentucky’s Latinx population in Western Kentucky after the devastating tornadoes there, and hopes to work more closely with this demographic in the future. 2022 is an election year, so look for Keturah to do her thing and get things done–her hands are bound to be integral in several exciting political campaigns. 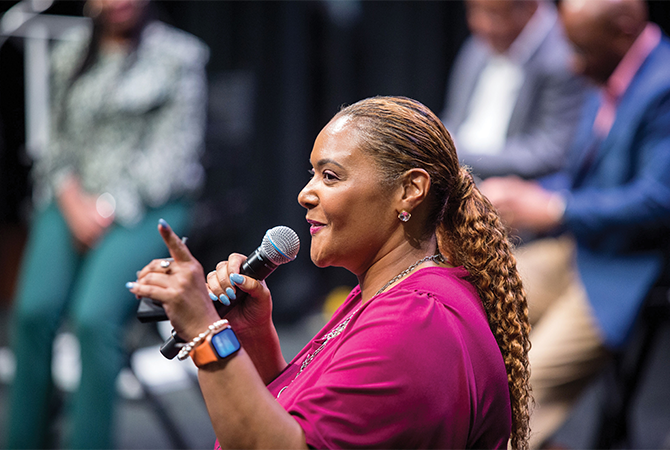 Her ingenuity helps others get ahead.

Wanda Ramsey is a product of Louisville’s finest systems: Male High School, the YMCA’s Black Achievers Program, UofL’s Speed School, Ford Motors, and General Electric. These entities, coupled with a degree in industrial engineering and an MBA, have helped Wanda cultivate her gift of analytics for North America’s largest appliance manufacturer. With such a large company, her role at GE needs some explaining: she coordinates efficiencies for the servicing, parts, and replacements of newly launched appliances that come through the Louisville headquarters. But above all, Wanda considers herself a people’s manager. Since being promoted to this position in the midst of the pandemic, Wanda has facilitated the growth and restructuring of her team by promoting 50% of her former team members and filling their roles with new talent. Since the pandemic, Wanda has helped to create cross-sectional teams that work to make the company’s many departments more efficient.

“My identity is very tied into work, but this summer I want to re-engage with the Chestnut Street Family YMCA and the Black Achievers Program.” Wanda formerly served on the board and would like to renew her volunteerism there. “This program helped to finance my education and I’d love to see my 14-year-old niece get involved as I did. If she’s going to give up two Saturdays a month, I have to do my part, too.” 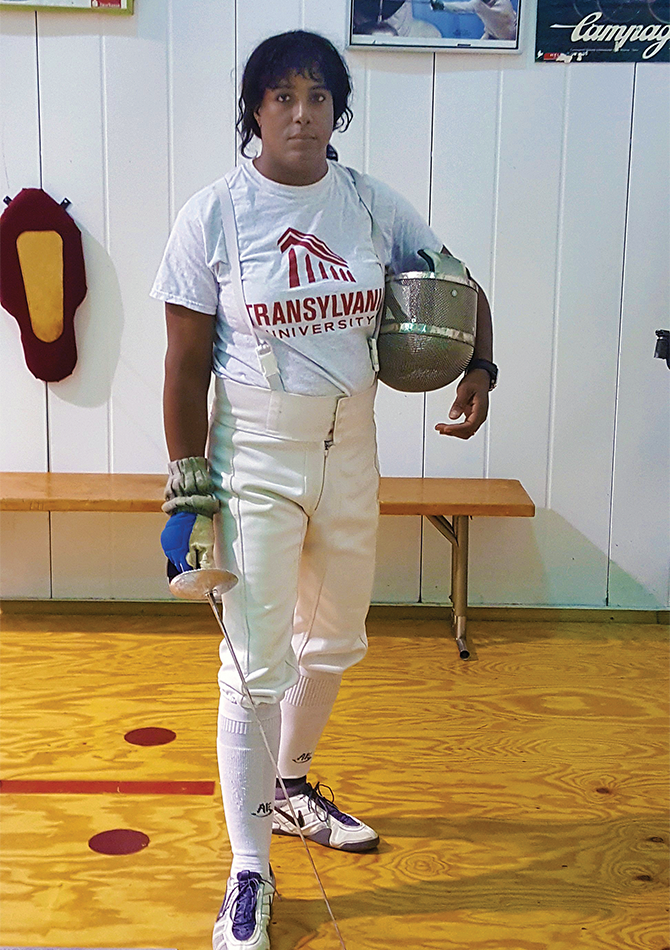 This award-winning fencer shares her love for the sport with kids.

Dawn loved softball until a rib injury prompted her to give fencing a whirl. After seeing an advertisement for the Louisville Fencing Center in a magazine, Dawn signed up for a four-series lesson, and that was all it took. Dawn is now a two-time USA Women’s Veteran Saber Champion, has competed on two Veteran World Championship teams, and is currently ranked 10th for her 50+ age group. Fencing has taken her to Italy and Slovenia and has secured her roles as a leader in the fencing community (as USA Fencing Kentucky Division Chair and member of the USA Fencing Diversity, Equity, Inclusion and Belonging committee).

Dawn competes this March at the North American Cup and continues to work to bring the sport to underserved populations in Louisville. Dawn is partnering with the Louisville Fencing Center in the Russell Neighborhood to increase visibility of Black students in the fencing community. This grant started in January and will allow 20 kids a free opportunity to train with the area’s best fencers. She is also partnering to expose more Jefferson County Public Schools students to fencing, as well as to create scholarship opportunities for local Black athletes that may not have considered the world of fencing. 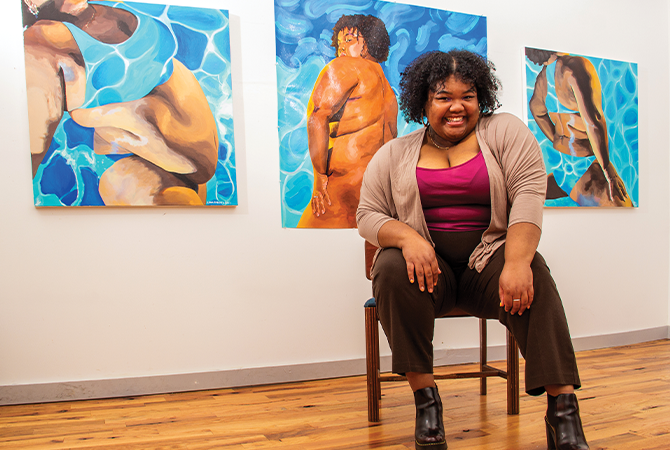 She uses art as a way of celebrating our differences.

LaNia Roberts is shaking things up in the Louisville arts scene, and she’s only 25. This graduate of Central High School and Governor’s School for the Arts participant grew up in the West End and is a first-generation college graduate. Her artistic talent earned her a full ride to Syracuse University, where she received an art degree, studied abroad in Florence, Italy, and in Cape Town, South Africa. After returning home amidst a pandemic, she caught the eye of Ed Hamilton, a world-renowned sculptor known locally for his Abe Lincoln statue on the Waterfront. Ed hand-picked three artists for his partnership with Goodwill Industry’s “The Art of Goodwill” project that finances artist residencies that align with Goodwill’s mission. LaNia painted two portraits of Louisville change-makers that personally impacted her life: Jecorey Arthur (district 4 councilman and Simmons College professor) and Tamika Palmer (Breonna Taylor’s mother).

In the next year, LaNia will be working on several mural projects, will be featured in a Lexington-based art show at the Living Arts and Science Center, and will work on some new concepts in her art studio at ACME Artworks. She plans to create a series of plus-sized Black women to feature their beauty and worth. “I am excited to be able to make a living doing what I love and developing work that helps to raise up voices in the community.” 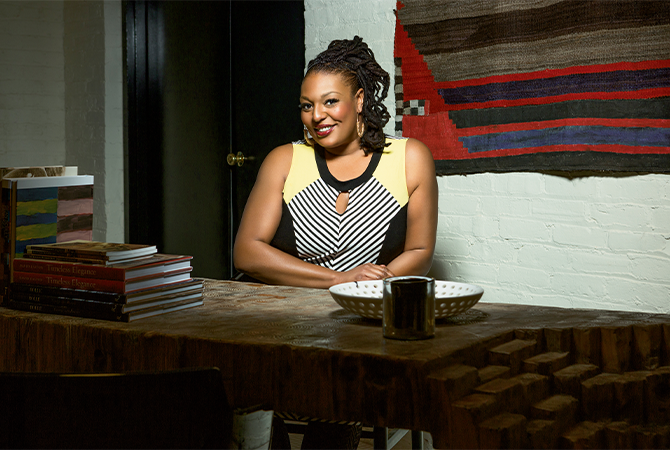 She brings diversity, equity and inclusion to the airwaves.

Originally from Ann Arbor, Michigan, Louisville should be very proud to claim transplant Dr. Kaila Story, who has been laying roots here since 2007. Kaila is currently an Associate Professor of Women’s, Gender and Sexuality Studies at the University of Louisville. She holds a joint appointment in the Department of Pan-African Studies and is the Audre Lorde Chair in Race, Class, Gender, and Sexuality Studies. Equipped with a MA and Ph.D from Temple University, Kaila worked to develop a new minor at UofL in LGBTQ studies by first creating an introductory course in 2007 and introducing the minor in 2009.