The Family That Moved to a Farm

The Family That Moved to a Farm 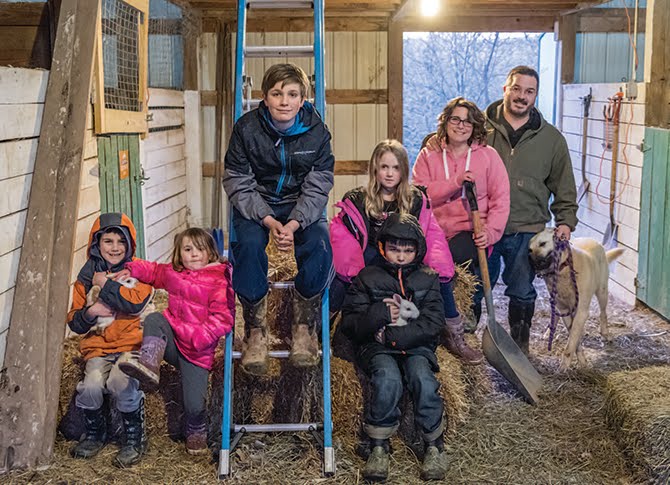 The Murphy family is giving the classic TV show Green Acres a run for its money. The family consists of Shawna and Kevin and their five children: Jonah (12), Elijah (10), Sam Isaac (8), Eliza (7), and Anna (4).

The family was living the quiet, suburban life until much of what they knew changed. Two years ago, Shawna heard about a property for sale and fell in love with it. Shawna grew up on a 5-acre farm. She helped her father tend to peacocks, chickens, and other livestock. She wanted a more “wholesome” life for her family. Shawna always dreamed of returning to the farm lifestyle but had no idea it would happen so quickly. Kevin was leery of the move but soon accepted the idea, and then the children got on board.

The family moved to the 10-acre property and began collecting their menagerie of animals, most of the feathered variety. All the children have learned to adapt to farm life, and they all help on the farm when they are not in school. They all have areas in which they excel, and they all enjoy some aspects of farming more than others.

Living on a farm sometimes means having superpowers. Jonah is known as the “chicken whisperer.” If a bird wanders off or needs to be seen for any reason, you can count on Jonah to catch it. He says that he uses food and bird calls to get them to come to him, and then he gently scoops them up. Shawna says her superpower would be having a green thumb. She has learned how to till the soil with the best of them. Elijah says his superpower is to be a great explorer.

The children all agree that one of the most significant challenges is living away from most friends. They can’t jump on their bikes and ride over to a neighbor’s house. Playdates must be arranged and coordinated.

Shawna notes that her biggest challenge has been bearing witness to the life and death process on the farm. Last year she found herself with a baby sheep and no mother. She bottle-fed the sheep and watched him flourish, only to witness his unexpected death months later. She says, “You learn to be thankful for the time you have.”

The farm isn’t all work; there is plenty of fun, and there are surprising times. The family spent several hours coaxing 60 turkeys into a trailer for processing the next day. Once the turkeys were secured, they left for a school function and returned home within a couple of hours. As they neared the house, they saw on the barn the silhouettes of several turkeys roosting on the edge of the barn. They quickly realized that most of the turkeys in the trailer had escaped and were now on top of the barn! They all flew into action and were eventually able to get most of the birds back into the trailer. Shawna says, “We learned from that experience and laughed a lot once it was over.”

The family credits friends and neighbors with helping them to get settled. They often barter for supplies and trade advice on farm matters. Shawna has been struggling with a beehive, and a neighbor recently gave her some information that she plans to implement in the spring along with a grant that Jonah secured to further the beekeeping on the farm.


One chore that the family loves
The Murphy family fights over who gets to mow the lawn. Shawna believes that is because of the five-plus hours it takes that you are outside riding in peace.

A chore the family can’t stand
Cleaning the rabbit trays. They are large trays that are difficult to maneuver, and, well, it’s a stinky job!


An activity the entire family enjoys
When the family can get away, they love to visit family in Ohio. On the way they enjoy stopping in Newport, Kentucky, to visit the aquarium and have dinner at the German Hofbrauhaus restaurant.

What she hopes her children will remember fondly about the farm
“I truly hope that my children remember what it feels like to be connected to the Earth!” said Shawna. “I also hope they remember the neighbors and community we have created here with people willing to work together and help each other out.”


An unexpected expense on the farm
The farm has had its share of expenses. The tractors and lawn mowers need to be maintained and repaired often. The materials for the birds, such as incubators, cages, and bird runs, are all much more costly than the family anticipated.